[UE5] KRYPTON My version of my Favorite Superhero: Superman 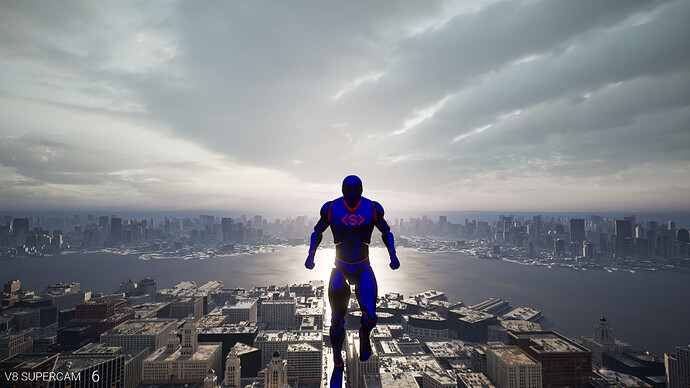 There’s a many discussions over the realization of a “Good” Superman Game. In my opinion, to capture the raw power and speed of Superman, City Scale is not large enough. Superman needs Planet Scale Game World.

Is this a starting point to work on your multi camera system approach ?
At the moment if i look at it i lost a little track where the player is and got motion sicknes

Yes. You can easily loose the Player just watching, but when you’re in control, you can feel where the Player is (or should be). It’s Cinematic Rollercoaster and I think its cool that it can induce Motion Sickness just like in VR. New skills are developed in Controlling the Camera to avoid it. In fact, I’m implementing a new form of game mechanics, scoring, damage, and other effects based on camera perspective.

Movies don’t keep the Viewer in single perspective for long duration, thus in my opinion, to achieve True Cinematic Feel, the player’s Camera Perspectives needs to switch just like in Movies in addition to Photorealism. We turn up the process a notch by adding interactivity where the player can control these perspectives on-demand.

@TechLord i really like the concept and the idea behind this. I think this can be really cool in the end.
This is just an idea or sugesstion … if you find a way to save the moving data of the player and move the camera the same way back to the player would be nice.

I have no clue at the moment how this could be archived, as i said just an idea.
But i allways love if people tell me there ideas, cause brainstorming with yourself leads mostly to the same answers.

For my understanding, when you “save the moving data of the player and move the camera the same way back to the player” are you referring to player character body location/rotation? If YES, this could be achieved easy by extending on the in-game ‘Waypoint Recording’.

Instead of recording the Camera Viewtarget Waypoints, we record the Players ‘active’ mount orientation changes and generate the Waypoints with them. I’ll keep this in consideration when I start developing and testing the waypoint recording concept.

My only question is what is the anticipated effect of doing this?

@TechLord yes saving the transform data was what i meant.
I did not try such things till now, but it sounds like it is not to hard (as it always sounds in the first place).

And the use of this … doing cool things just to have fun with it.

I think it could look nice if the camera follows the same path and slowly reach the player. But maybe it would turn out it doesn´t, i just test such ideas often and also often i do not like myself how it feels/look.
Imagen use this date for a duck … flying over the player infront of him and this two have a collision. Just some sort of funny stuff.
Maybe use the data also for enemys they shoot a rocket or somthing like this.

All depends on what direction you go with a game.
But i am always happy if i can laugh even other people do not understand why. Maybe i am just not normal hehe.

That is what i love most with creating something, you just can go wild, the only limit is your imagination.

Seems like you allready have the system in place this was really fast.
Looks really good. This was kinda what i meant.

Not sure what it is about, but sometimes it looks a little offset, is this if you move the moment the camera is flying to the target position?

Not sure what it is about, but sometimes it looks a little offset, is this if you move the moment the camera is flying to the target position?

Yes. The target position is based on the active Mount, which is not always a straight forward mount.

I truly appreciate your comments and questions. As a token of my Gratitude, here’s an Exclusive KRYPTON Video…

With this beam you now really have a superman guy. Looks cool.

And for the comments: I think that is what this forum is for, you can only get better if you get some sort of information and also criticism. I always like if someone tells me straight what he is thinking about things. So i can wrap my head around and think about how to make it better.

In the end i think all people here in the forum try to create the best they can and learn from others. So some input is always a good idea.