Does any one know how to remove that spotlight reflection thats is on the tv screen? 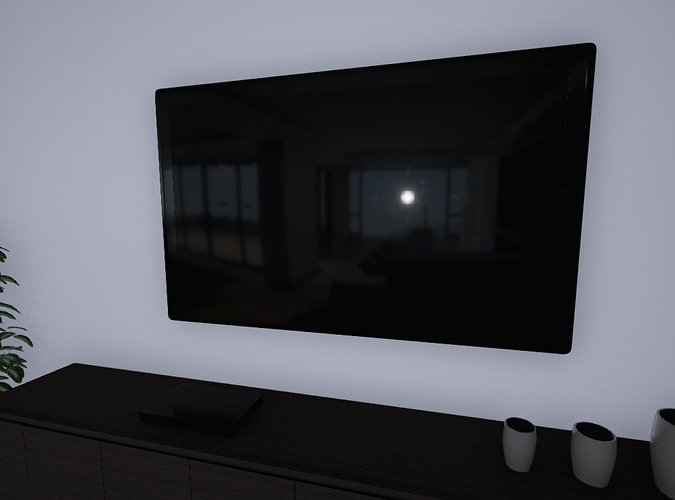 You can do one of two things to remove the lights reflection from the reflective materials.

Thank you very much for the response. I have checked all these spotlights and all of them are setting on static mode so I don´t understand why theirs specular/reflectiveness are baking. I don´t want to modify the material roughness because it looks pretty nice reflecting the rest of the scene.

Double check that you’ve not got any other light sources that would be influencing these areas if you don’t want it to capture the reflective nature.

In the sample below this should help demonstrate some of what’s going on. This is just a simple scene with a reflective material applied to the object. There are spot lights for each pointed at the object.

If you use a Sphere Reflection Capture in the same area you’ll see the same results with the difference that the reflection cubemap has been applied like so.

"You can do one of two things to remove the lights reflection from the reflective materials.

Set the Min Roughness in the Light Source to 1.0. This will make it so that there is no reflection for that light.

Set the Light to Static. Static Lights don’t bake their specular/reflectiveness into the lightmap."

I’m getting a similar issue above in 4.12.5. No matter what, all of my lights are showing up in reflections.

I’m referring to all lights. If the mobility is set to Static it will not bake the specular reflection into the lightmap. 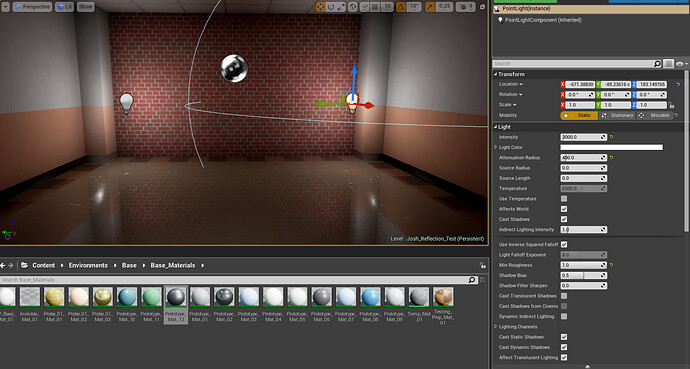 You can see in this simple setup that static lights are visible in reflections. This is the result after building lightmass. We updated our project from 4.11.2 where this wasn’t an issue, to 4.12.5 where it became apparent. Any suggestions?

Are you by chance using a Planar Reflection actor in your scene? If so, to my knowledge there is no way to remove the light sources currently from the reflection plane, but if you’re using just reflection captures and lights there should not be an issue. I’ve attached a simple project that has multiple setups to showcase what is going on.

Ah, the box reflection captures are the issue. Originally these types of star patterns, that are easier to see in your latest image are something that has been reported here: Unreal Engine Issues and Bug Tracker (UE-19818)

Originally these affected Sphere and Box Reflection captures. It looks like the Sphere’s have been addressed, but that Box Reflections have yet to be addressed. Until this is resolved, there isn’t a way to remove that reflection of the light from the Box Capture that I’m aware of.

Hey Tim. I tried your project and everything looks correct, yet my project still shows static lights in reflections. I added a stationary light in the middle of my scene with a roughness of 1. It appears as it should, but the static lights on the edges still show up in the reflection.

We have a pretty complex shader in place. I replaced our floor with a standard, simple material hoping it could fix the problem. It does not.

I’m not using a reflection plane. In this scene, I disabled Screen Space Reflections and just have a box reflection capture. I’m stumped as to why this is still happening. 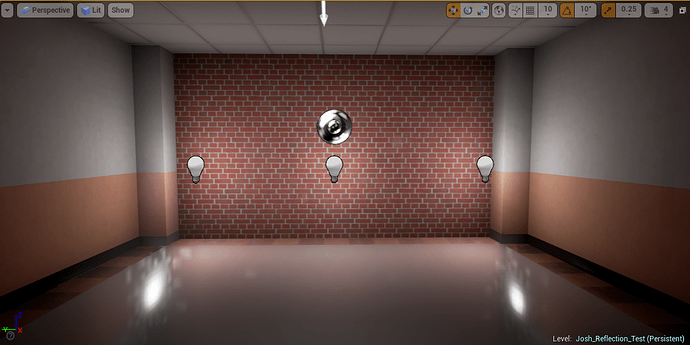 The Sphere Reflection Capture does the same thing for my scene. Everything was working great in 4.11.2 (no static lights showing up in reflections). Once we moved to 4.12.5, that’s when the issue occurred.

It also baffles me that your scene works great and like how it’s suppose to look, yet my scene is having the issues. If Sphere Reflection Captures would fix the issue, I would switch to them in a heartbeat.

That’s definitely odd! I do have two suggestions to try as a kind of workaround/hack around thing since it doesn’t happen in a new 4.12 project. This is assuming you’re not using a code project and its just blueprints otherwise, there may be extra work involved.

Go to your project folder and delete the following folders if you have them. Intermediate, Derived Data Cache, Config, and Saved. These will be regenerated, but it may have some corrupt data here that it keeps referencing.

Lastly, select all the folders in your project and migrate them to a new blank project. See if the issue carries over that way.

If both of these fail, would you be able to create a new level in your project that reproduces the issue, then make a copy of the entire project, and remove anything that is not needed for that level. Upload that project here or send privately. I can at least have a look and see if I can find something to work around it, but I’m not sure really at this point since the sphere reflection captures are not causing an issue on my end.

Hey Tim, I tried both of your suggestions to no avail. I can get a test level together tomorrow to send you. I’d rather send it to you privately. What’s the best way to reach you?

No problem with keeping it private. A link via the forums works fine

I think you may also have the option to post here when leaving a comment and selecting “only Moderators” as well. If you choose that option I’ll remove the link immediately afterward, even though only those who are moderators would be able to see it posted. It’s up to you though.

Sorry for the delay Tim. I reduced the level down to as simple as I can. I replaced my box capture with a sphere capture and the static lights are still casting reflections. (It may actually be the star pattern you mentioned, but happening with the sphere capture).

Hopefully the issue will be reproduced on your end. If you need any other details/files, let me know! Thanks!

I wasn’t sure if you wanted the link removed or not, so I went ahead and did it anyway. I’ll take a look and get back to you on this one with what I find.

I was completely wrong on this one. It’s something that still appears in my level as well and solely based on the way I set up everything, which is my goof!

I’m not sure if you’ve considered this as a workaround or option, but we do have Planar Reflections in UE4 now. I recreated your scene (within reason of materials) and grabbed a few screenshots of comparisons that may help.

These images are using the same lighting and intensities from the test project you provided. Only the materials have changed to be similar to your image in the first post. 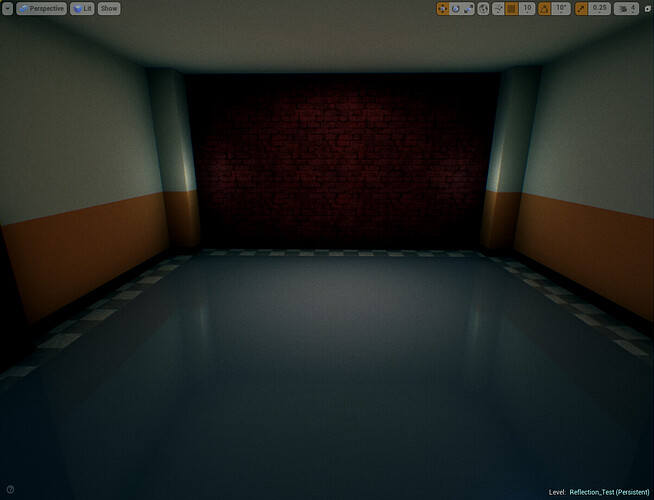 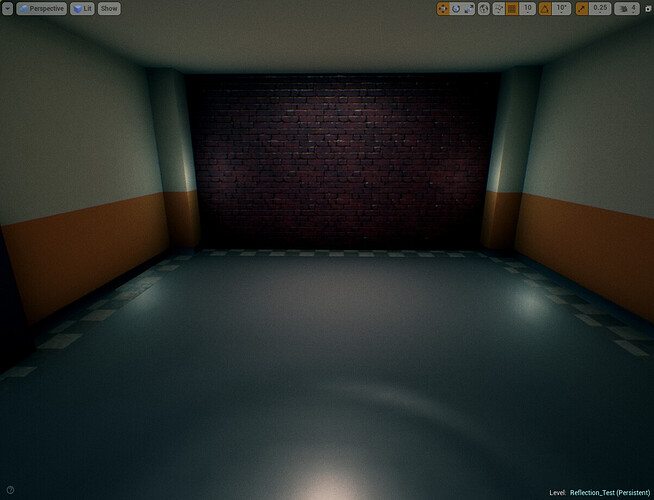 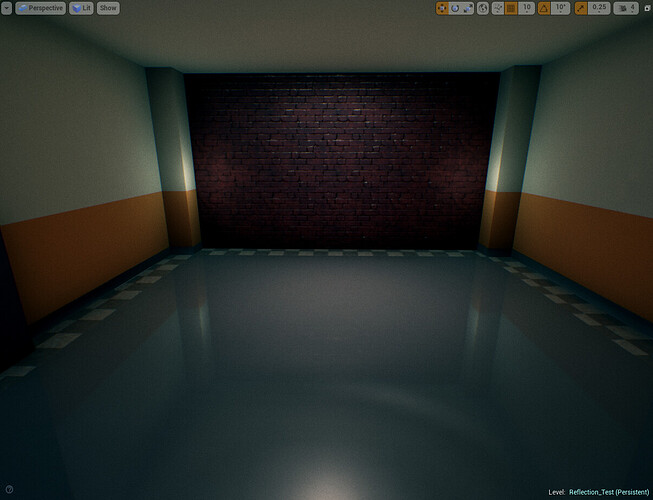 We have documentation on this feature now and there are additional features that aren’t listed in this page coming with 4.13 to limit more so what can affect the reflection capture.

Depending on what your performance goal is, these add a little bit of overhead to your scene’s performance and only grow depending on the number of actors that have to be rendered with them.

I just wanted to throw this out there as an alternative that maybe you were not aware of or had considered.

Thanks so much for checking this out! My next step was to experiment with the planar reflections. That way at least the floors wouldn’t be causing any issues (seems minimal everywhere else due to rougher material values).

Thanks again for looking into the issue and taking time out of your day. At least I know I’m not going crazy on my end

Glad to help. I was going crazy myself!

In the event you don’t check out 4.13 until it’s released, these are the additional settings that’ll be available starting with 4.13 preview 2 coming soon.

This list really gives you even greater control over the scene and performance optimization!

Turns out planar reflections were a bit too heavy for our game. Still, if others stumble upon this issue with Unreal, I think I may have found a solution/workaround.

If your lights are static, and you don’t want them to appear in your reflections, then uncheck “Visible” in the Rendering section of that light. The light and shadows it produces will still bake into the environment via lightmaps, but it will not appear visible to reflection captures.