Why do I get bad shadows from my lightmaps?

Hey Guys,
I think i have another problem with my lightmaps… After looking at some Tutorials and some very good help here on the site i was able to clear 95% of my lighting issues but also some new problems showed up…

I using two UV Channels, the lightmap Channel is Flatten by a spacing from 0,02 “i tried everything from 0.01 to 0.05” without any difference. I even breaked some of the problematic ares off and put them on a seperate square on the UV grid but for some reasons i get this dark areas on my object and i have no idea why… the whole light map thing just fu… me up at the moment

Just forgot to write the problem appers after the building process so i think it can be just a lighting map issue ?

Can you post a screenshot of your lightmap UV? I guess those faces are too narrow in the UV and the resolution isnt enough, and that’s causing this kind of bleeding.

Yeah, just as i thought. Those parts are way too tiny so shadows bleed between parts when there aren’t enough pixels per UV island.

Is the whole building a single mesh? If it is, i suggest splitting those windows and making them a separate mesh and doing the UV mapping again. You’ll have a much better result that way and you wont have to go crazy high with lightmap resolutions.

Jesus so many work just because of this stupid light maps, so the problem areas are to small on the UV Gird ? thats why the black areas appears? Is there any other way to make the black areas gone? like scaling up this individual areas in the light map?

I just tried to detach all 4 windows, than i UVW Unwrapped all of them with channel 1 and 2, but after marking them all and exporting in one file the result look like this… and it is also impossible to give every window its on light map resolution, i can just click the building and apply one light map…

You shouldn’t combine them during import. Make sure Combine Meshes isn’t enabled in the dialog box while you import.

Drag and drop your meshes into the level, and then enter 0,0,0 for the location of each mesh. They will be placed exactly the same place they were in you modeling software.

Thanx, I just seperate them, as you wrote the combine Meshes box was checked and i didn’t saw it… The problem that i have now is, how the heck i can combine the main building together with the windows ? without any space etc between them ?

The 0, 0, 0 didn’t worked out, second problem is that the main part of the building isn’t located at 0, 0,0 coordinates… is there no snaping option for the main object?

I used splited objects by linking them to a dummy in the cryengine does it work maybe the same way in UE4 ?

It doesn’t matter where the object is located in the modeling software. Drag & drop the main building to the scene, set it’s coordinates to 0,0,0. Then do the same for every other part.

First of all, thanx for your patience.
ok i got it but i have still problems with the lighting map, every of the 4 big window sets has now his own map, i even set the light map resolution for the windows to 512. I still get some dark areas / spots, i’m freaking out… this f#### lightmaps…

No problem. Lightmaps can be frustrating at first, but no need to freak out.

Upload the fbx file of the whole building to dropbox or wherever you are using if you want me to take a look.

Thanx!
here is the building, 3 of 4 Windows are using the same UVs, for the 4 Window a tryed even another constilation but without success.

Just forgot to write, the sun needs to shine directly on the face of the building, in other views where the windows are in shadowed ares you can’t see the issues…

Ok, first of all it looks like you detached the windows in a quite messy way, there are floating polygons behind those windows and open edges, etc. I suggest remaking at least those window parts.

Second, if you dont want to be bothered with remodeling, there is a way to get the minimum shadow bleeding. 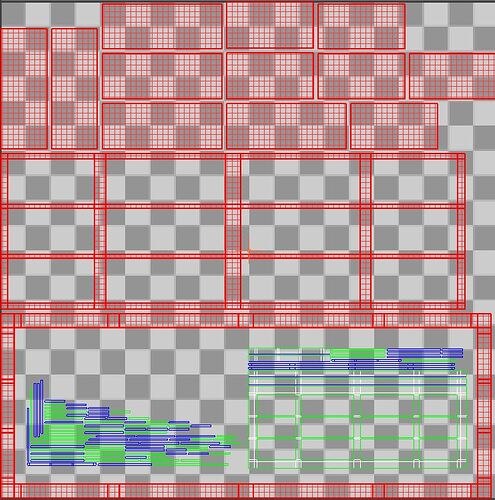 Select the front faces of the window, pack them, and toss the rest inside the large frame as you see in the image. That will give you the most pixel space for the most visible parts, and you’ll get this; 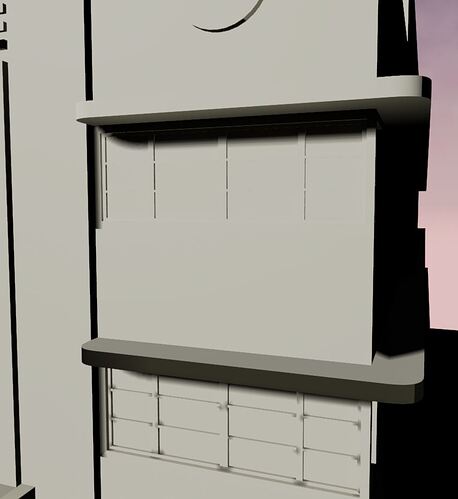 Top window mine, bottom yours, 256 lightmap res.
The inside of the frames are still a bit blotchy and you can decrease them by editing the .ini file but i dont suggest that if you are making a game.

So in the end the trick is to keep your mesh clean and maximize the pixel space for the most important parts of your mesh, and again, i highly suggest editing this building into a clean mesh with no floating polygons and open edges.

Jesus i’m so stupid, i didn’t saw the floating polygons, i can’t even explain why i didn’t saw them…
I have a older version of this building, where the windows are still attached to the main mesh. So basically i need just to detach the windows “in a clean way” this time… and the lighting should’t be longer a problem ?

what can i say, stupid i

but many thanx! this wont hapend a second time to me…
I’m going to sleep now but i will try it right at the morning…

Hi,
I just tried to extrude just a simple “window” with a clean mesh… but still have the same problems like with the unclean mesh… i even packed the window UVs the same way you did but i still got black spots and issues in UE4.
And i’m using a 512 lighting map… which should be a way to big for a a simple window…

this is just the window mesh, if you have time maybe you can take another look on it,

I can’t check the model right now, but if you set the UV’s as you show in the images then i’m all out of ideas. :\

One last thing, remodel the windows only, building can stay as it is.