I’m quite new to UE4 (and game engines in general), and I’ve run into a problem with lights.
Not sure what’s causing this. My only guess is the fact that the the mesh being used is pretty large, but I might be wrong.
Does anyone know something that could help me? 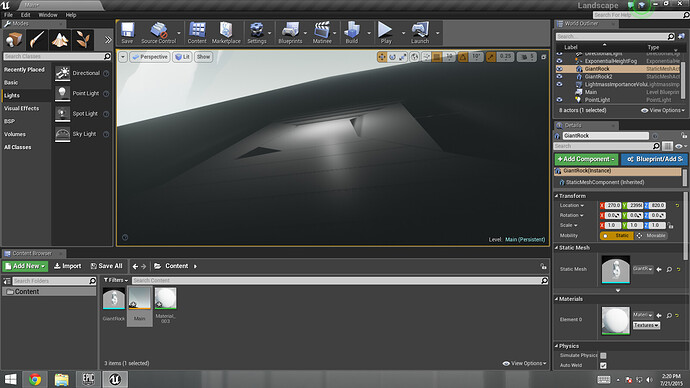 If you haven’t built your lighting yet, then it’s possibly due to the directional light being close to parallel to the surface which would show lines from the dynamic shadows more clearly.

What if it’s a movable light? I still seem to get the same results.
I’ve tried building it, but the light just disappears.

Edit: Just unchecked “cast shadow” on the pointlight, the weird artifacts are gone now, but that still leaves me wondering as to what caused them to begin with

That artifact is usually referred as shadow acne. And is caused by floating point errors in the depth maps. If you want a more general explanation of the cause look at: Common Techniques to Improve Shadow Depth Maps - Win32 apps | Microsoft Docs for example.

For future reference you can get rid of those artifacts by changing the shadow bias setting(but can cause other issues instead), but usually you do not want to place light so close or at a steep angle to surfaces anyway, especially at whitebox stage.