Weird light spots in my lightmap

Hey folks. I apologize in advance because I suspect this is a total noob question, but I poked around a bit and cannot find anyone having this exact issue.

When I build out my lighting in my level, on this particular building (by far the most affect anyhow), I’m getting all these weird random points of light all over the thing. I have spent hours and hours playing with the world Lightmass settings and rebuilding the lighting, checked my mesh in my 3D program over and over, reimported it and rebuilt the lighting, tried merging verts to see if microscopic gaps could be causing it, and rebuilding the lighting… It’s a painstakingly slow process and I’m not really getting anywhere.

Does anyone know the magical answer? I have a number of buildings imported into this city scene, and for whatever reason this one is BY FAR the most affected (the others might have one or two little spots on them, which I try to ignore, but this one looks all lit up like a christmas tree and it looks awful). 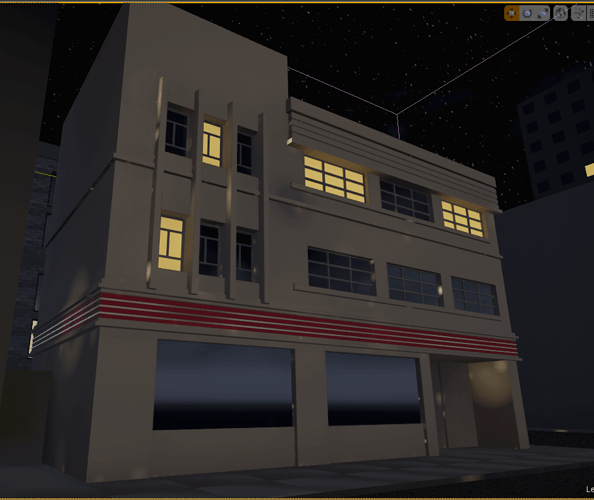 Thanks for the suggestions. The light map resolution is 2048x2048, and the UV’s are not overlapping and have quite a good buffer between all of the pieces. I will try another unwrap method and see if anything changes. Thanks.

If that is all one model you can try splitting it into a few smaller ones.

Guess I can try that too, thanks for the suggestion.

What I don’t understand is where these points of light are even coming from. The entire model is in an outdoor, dimly lit (night) scene, and there’s really nothing on this entire model that is as bright as these little spots.

Maybe I will try taking the emissive materials off of those windows and see if that helps.

Okay I found the culprit. I have a building across the street and down a bit, and it’s an old timey looking movie theater, complete with the movie sign with all the bulbs around it. Anyways I had put dozens of tiny static point lights on it (each bulb) and after deleting them all, the problems are all gone.

Can’t imagine why these lights so far away were causing the problem, but they were. Each one had an attenuation radius so small that it did not even overlap its neighbor. shrugs