Voiptalker isn’t my component, it is epics, and I haven’t had to use it much.

So it should update in theory after being adjusted, if the mic is already on at the moment it may not though.

What am I missing when changing the hand models from the default UE Mannequin ones? Help!

I’m using a new model / animation for vr ‘basic vr hands’ from the asset store. Followed the tutorial. So far:
-In vive character pawn I’ve changed each model to the new right hand, I changed it’s animation blueprint setting to a new one I created which is the old one’s event graphs copied etc.
-I then searched in the vive character pawn for every instance of the old RightHand Anim BP and changed the 'cast to’s to my new animation blue print.

I thought I had replicated everything, the hand models show in the viewport, BUT they only show up if I change the play/preview to ‘simulate’ mode, if I hit play from selected view port, or test in VR, the hands are still the mannequin hands?

Update: I’ve had some progress… In the vive character pawn if I uncheck ‘spawn grasping hands’ my hand models work as normal. But they the grip animation doesn’t work. I’m discovering I need to be concentrating the grasping hand model and GraspAnim BP, trying to substitute and replicate the BP… but still not quite working for me. Is there an easy guide to this somewhere?

What’s going on, or what am I missing… is there some easier trick I’m missing? Thanks!

Yeah you need to change up the grasping hand and setup the collision for your new model so that the welded body driver can work with it.

The grasping hands being the default hands and not optional ones are new to 4.26 so some of the old stuff is still sticking around for people to transition easier for a bit.

Thanks for the reply mordentral, although I’m looking at this… looks complicated. The “Basic VR hands” I bought from the epic asset store were compatible with the default vr template ue4 skeleton to replace… I managed on that template, but it’s looking quite complicated here? I opened the physics of the Basic VR hands I purchased… I can see they have each part named differently… e.g. only 2 parts for the index finger, would I have to change all the bone names and replicate your exact collisions in the physics BP so it matches your grasping hand physics BP exactly? If anyone would be willing to PM me with step by step instructions how to replace the default VR hands, I’d be willing to pay at this point! lol, thanks!

anyone know how to make other Character walk onto and stand on the VR Hand?

Its more complex because its using the WeldedBodyDriver to keep the hand simulating as a single body but still driving each fingers animations (like HL Alex’s hands).

Looks like physical grasping hands don’t work in 5.0 branch, switching to it just freeze hand models.
Any idea why?

Yes… Chaos is bugged and stops updating constrained objects as it doesn’t treat the kinematic actor pulling them as an actual scene object or something, they will only unfreeze when another simulating object gets close enough to bring them into consideration.

Its not just the hands, global for all simulating objects.

I believe this was fixed in revision 2 of the 4.26 chaos branch but UE5 EA was branched off of an earlier 4.26 I think and the fix isn’t ported in.

Besides that though there are other obvious issues with chaos in that build, I wouldn’t expect very great results yet until they have been ironed out on the engines side.

Thank you for explanation! Let’s hope they will fix the issue soon. 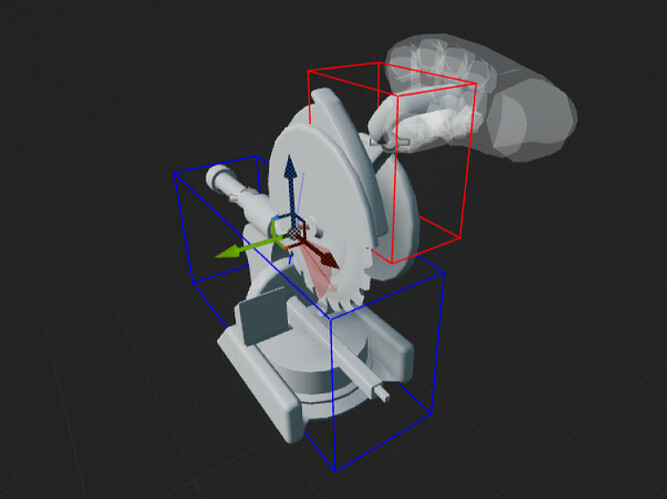 Hi everyone. I have this saw and I want to snap/socket grab the handle. I have tried doing this first with the VRLever and second with a custom physics constraint grab.

With the VRLever method I wasn’t able to get the hand to animate onto the handle and remain there and I couldn’t get the VRLever/Handle to work with other physics constraints on the saw.

With the Physics constraint method, I could get the hand to animate or the hand to move with the handle as it moved. It would just stay in the same position it was initially grabbed there.

Can anyone please point me in the right direction/method to achieve this?

Not sure what you are actually gripping there but the hand needs to be attached to the thing that is actually moving, it will attach to the body that it is gripping by default. The physics method is the easiest to handle like that as the vr lever is logical by default so it won’t apply physical forces.

I am gripping the mesh in the red container and here I used the physics method. It was easy to get functional but I haven’t been able to get around the handle moving but the controller mesh staying in the original place it was grabbed

Vive_PawnCharacter, is the Mesh duplicatied with Body&Head?
how to set the a whole mesh body which can controlled to walk like normal animation, meanwhile the Hands are the same like the GraspingHand.
Thanks!

Still sounds like the hand is attaching to that red container possibly? The hand will follow whatever it is attached too.

@mordentral Hi. I found capsule location moves differently from its component location for roomscale movement in VRRootComponent. I am trying to implement my own roomscale movement with multiplayer support from scratch, so I want to know the reason behind this. Could you please explain that? Is it for multiplayer?

I have implemented a simple VR character(no multiplayer) by my self, which just moves capsule’s component location and camera’s parent component location differently so that capsule follows camera’s location but camera’s parent stays at the same location. I thought that was ok, but you do much more complex stuff than my implementation, so I wonder if my implementation has some kind of limitations and that is maybe replication.

I wanted a character where roomscale was fully preserved, there are a few upsides to de-coupling it but its also a ton more effort. I even have an alternate character the (VRSimpleCharacter) that locks the camera and just moves the character instead which is closer to what you are doing.

Your approach should be fine generally, though you will have to decide how you want to handle injecting the movements into the character movement buffer, otherwise you’ll have to be fully client authoritative.

In single player, doesn’t really matter at all. 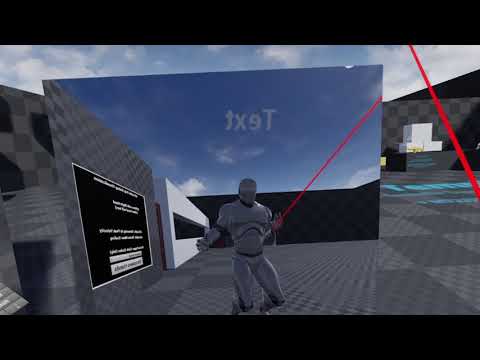 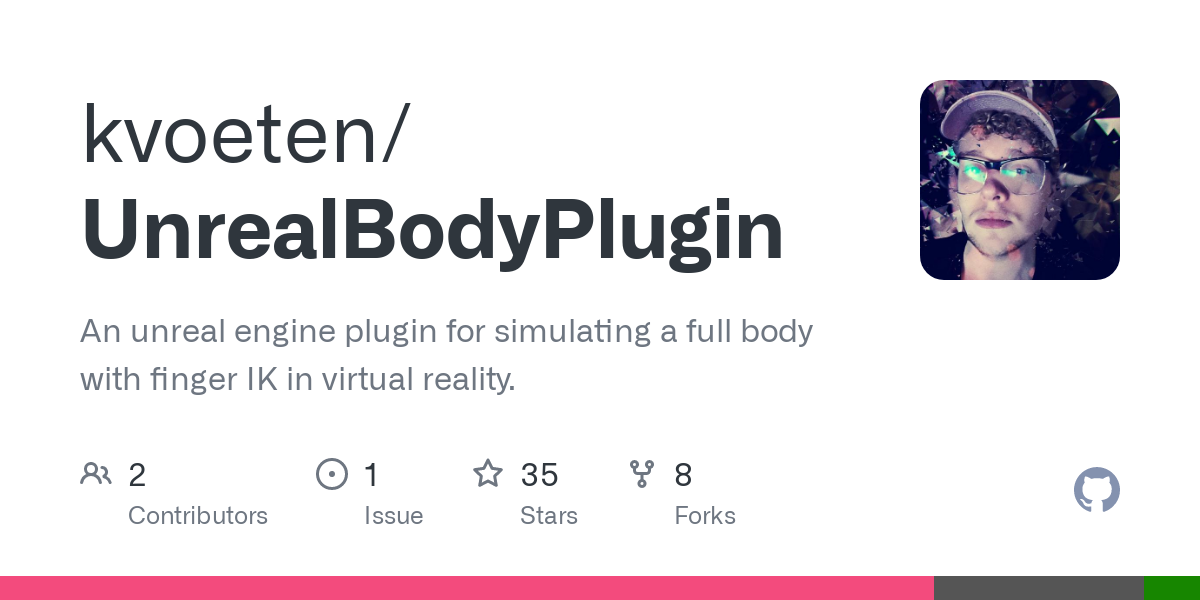 This release has the controller-to-hand offset that was previously removed re-added. It also has an easily accessible speed modifier to adjust the movement interpolation manually. Supports Unreal E...

GitHub - kvoeten/UnrealBodyPlugin: An unreal engine plugin for simulating a...

he provide a full body IK with a modified Vive_PawnCharacter, 3-points tracking, and FingerIK for grab.
BUT there are some problem, after grab object then move/rotate the hand, the grabbed object’s location will change, still be grabbed BUT may far more away from hand…

So…if want the hands in the whole body model have the ability of the GraspingHand, UsePhysicalGraspingHands=true, GraspingHandsUseFingerCurls=true, how to do it? and if the Hands are UsePhysical how about the other parts of body?? should make them all physical?and how??

Vive_PawnCharacter can grab cube, but after grab, move the hand BUT the cube’s location is not right, eg. sometimes get away off the hand and the GrabSphere.
as for the GunBase in the VRExp example, can grab BUT the hands’s never really reach the gun’s surface…however, for the original VRExp example the hands can perfectly reach the gun’s surface and grab at the gun’s trigger.
i know you use the Hands’ from the whole model’s body instead of the seperated GraspingHand. BUT still not found where you did this. SO still not find how to fix the above grab problems…

AND ABOUT the Body physics, is it able to open some physics inorder to avoid different parts of body overlap or even cross in each other.
eg. while waving the hands, the upperArm will often cross the Chest(spine_02)

You posted this in the discord as well, you should probably keep these kind of questions there since lots of the users actually know that plugin as well as it being fairly specific and not related to this one.

ok, Thanks! because your plugin is so popular and so many ppl and project use yours:D

Hello I’m new to your plugin and UE4! I have a valve index and I’m using your plugin. I can’t pick things up for some reason. I went and checked to make sure the controls were set in the input Action Mappings and they are. Any Ideas? Also I saw you mentioned a discord above. How do I join? I’d love to be in a community that knows how to use this plugin lol. It’s really in depth and I’m eager to learn!