I’m trying to either create a c++ project or generate visual studio project files, and always gets an error like the one below.

doesn’t matter which one I choose, the error (and the compiler path) is the same.
Also note there is currently no “Microsoft Visual Studio 14.0” directory on my computer,
so the path is completely incorrect.

I also don’t have any environment variables regarding the path.

How do I tell UE where visual studio is installed, or where the compiler is?
or how does it detect it?

Can you change compiler version. For this go to Project Settings > Windows > Compiler Version(Under Toolchain Tab).

how do I change that for a non-specific project?

The only project I can actually open is a non-c++ project.

details below why I can’t open a c++ project, although it shouldn’t matter
(when trying to open any c++ project I’m getting an error saying

If I press no, it exists.
If I press yes, it attempts to compile using the default toolchain which doesn’t work.

I found a trick:
I’ve created a non-c++ project (which opens fine), I then added a c++ class, at which point I got a c++ project opened in the editor.

I then changed the toolchain where you said - but I’m still getting the same error:

Can you try this? Maybe helpul. 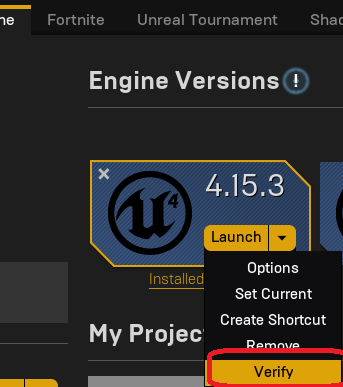 Foudn the answer - thanks to UE being open source!

I’ve looked at the github code and found where it was taking the path from; it was the following registry key:

p.s.
The above registry key path is just the third path UE will look for; the correct order is:

I didn’t try your solution since I’ve found mine in the meantime (look below).

I would suspect it wouldn’t matter though, since the problem was with registry keys / visual studio / windows, and not actually unreal engine.

HOLY SMOKES, this totally fixed my issue! Thank you so much! You are a life saver!

Hi matan19
I tried your method changing registry keys, but i could not find any SxS files in HKEY_CURRENT_USER beyond visualstudio

nevertheless I tried and this is what came up
//An error occurred while trying to generate project files.

thank you so much , i got same problem.

Thank you. This is the right answer for me.

Thanks mate. Worked for me

Works! Wish I could upvote twice – spent hours banging my head against this one

where do you go to edit the github code?

Hey bud. I have a fix for you man. I know this is way later down the track but. If you have that error it means it cannot find what it needs in the location.

I had this error when I had the wrong file path. Jump into VC# which is the next registry below and copy and past one of those file directories into the newly created or edited 15.0 or 17.0 (17.0 in my case) and past the path from the other registry. This fixed my issue.

@Jack W Lewis, its not in the git code, you edit a key inside the windows register (regedit).

@matan19 thanks you!! I spend all day try to fix this. tks

This didn’t work. Either that or I did it wrong. The latter is 100% likely. In the registry, I deleted 14.0, made a new key, but couldn’t rename it to anything. HELPPPPPPPPPP.

What do you mean you “couldn’t rename it to anything” ?

Ok, so I was dumb and was creating the wrong value… Fixed that part. The real problem is that my path is different than yours. inside of G:\Program Files (x86)\Microsoft Visual Studio\2017, there’s no VC folder, just a BuildTools folder.