In my packaged games the entire scene is covered in blinding red and blue lights, seemingly coming from a distant sun like source. This problem does not appear in the editor, even if I run the game in standalone mode.
I copied the entire lighting and camera settings from the Blueprint Flying Example Map.

This problem has been present since 4.9, and does appear when I try to run my packaged game on other systems with different graphic cards. Just in case I’m running this on a gtx 970.

Any advice or help is highly appreciated! 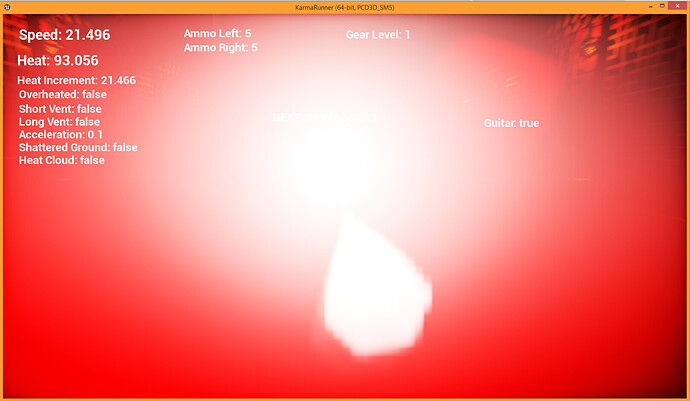 Would there happen to be an arrow component in the blueprint you are using?

Are you able to reproduce this issue with some simple steps in a blank project using the same content you copied from the blueprint flying example?

Thank you for your reply! I haven’t managed to reproduce the issue in the way you described it.

However, my level is made up of several randomized blueprints or “tiles”. Each “tile” contains static meshes and several arrow components. The arrows are used as points to draw splines inside the blueprint.

Could this be the problem?

Yes, there was actually a known issue with arrow components causing the viewport to bloom extremely in packaged projects (UE-28649). Try removing the arrow components to see if that resolves the issue.

Thank you very much! I have exactly the same problem. Even removing all the lights did not help. Turning off arrows helps.

I’m using Unreal Engine 4.12 and I am still experiencing this issue.

This issue is still unresolved at the moment, but has been marked to be fixed for an upcoming full engine release. It had to get pushed off of the 4.12 release, but we still have it on the roadmap to be fixed.