I don’t think it is. Everyone makes a mistake sometime… it’s baffling that they are ignoring the issue and not fixing it.

So from now on Visual Studio 2017 will be mandatory from 4.20 release onwards and Visual Studio 2015 can’t be used anymore? I still see a lot of serious bugs and stability issues on all major forums and not only the Microsoft ones about VS2017 and that worries me then because any VS bug/issue would add to any bug in UE4 itself and it could become a real nightmare. Not that VS2015 is perfect but it still is far more reliable.

Yep, that’s the reason I have not updated to CS 2017 as well. It would be interesting to hear what new features of VS2017 Epic uses for the UE 4.20 and why these new features were so urgently required.
I don’t think updating just for update’s sake is a good idea. I had VS2017 installed last year and it was horribly laggy. I din’t get to encounter any crashes or so since I uninstalled it again, but my experience with that thing wasn’t good and the complaints I read on different sites confirmed my aversion against that release.

The new depth of field is nothing short of incredible:

I don’t understand. Are you telling me Epic invests time and money in order to make the screen look blurry? Why in the world would I want to make part my gamescreen blurry? I mean I get it that human eyes are imperfect but why would I want to simulate that?
That makes no sense. What would make sense is to use resources to fix bugs that have been around since 4.19, which is btw why I haven’t updated since 4.18 and won’t until I read here that these hickups are fixed at the very least

It has been requested since forever, to enable character BP to walk around spherical planets for sinlge player and multiplayer, right now it´s only posible with paws,

I don’t understand. Are you telling me Epic invests time and money in order to make the screen look blurry? Why in the world would I want to make part my gamescreen blurry? I mean I get it that human eyes are imperfect but why would I want to simulate that?

I’m doing some tests and for now I can’t pin-point where the issue is, but 3 projects I have been developing are showing frame rates by half when packaged, not happening in editor thou. I think it is some issue with material output being doubled, which is a severe regression issue. The development was being made in 4.17 and I am doing the tests on 4.18 and 4.19 to be sure it appeared only in this 4.20p1. Once I finished these tests I will start to mess with the materials and see where the issue is, but I can tell pretty much it is with CustomNode node, going to make a small project showing the issue and reporting with the submission form.

Unreal Engine Issues and Bug Tracker (UE-43093) Is this going to be backlogged or? Just wondering because it keeps getting put back.

Unreal Engine Issues and Bug Tracker (UE-58676) These seem a bit prohibiting for an upgrade!

Could someone please help me parse this? It is either written badly or I am just not getting it since it’s 3am in the morning.

We’ve seen some reports of Niagara crashing when you create an emitter. This is due to an unresolved bug where the project isn’t getting the proper config options copied over. The fix is to go into the Project Settings for Niagara Editor and import the following config file. You’ll need to rename the file from .txt to .ini.

4.20p1 still has huge memory leak and stuttering on a range of machines.

This one worries me. I suspect it’s due to all the rendering changes in 4.19 for Temporal Upsampling etc…

Could it be this? Unreal Engine Issues and Bug Tracker (UE-58673)

The issue was introduced somewhere between 4.18.2 and 4.19.0 inclusively.
That ticket has the same symptoms, but It is not restricted to UMaterialBillboardComponent only.

The best summary that can be given is as follows:

Range activities on certain combination of hardware and software cause progressively deteriorating hitching and memory leak, both in editor and shipping configuration cooks.

That issue should absolutely be the highest priority one to fix.

Any chance that this can be expanded upon? It’s currently very vague.

It’s just a snippet of the early draft of the Release Notes for 4.20. There will be additional information for Mesh Description but it will be more high-level and expand a little on that paragraph. Once the new mesh format is more rounded out there are plans for a documentation page to go into more detail.

Nice! Any update on dynamic resolution scaling on PC?

None that I’ve been made aware of so far to call out for release notes. I’ll check with the engineer before 4.20’s release and update the existing doc page if there is.

Is this as in a new UI or improving the existing UI? or is it all the related editors out of the box?

I’m running into a couple of weird issues. It seems like the “depth blur” settings in CircleDOF no longer work at all, which is a shame, since I like being able to have some blurriness on both the background and foreground, but the minimum F-Stop value of 1.0 makes this essentially impossible.

Also, at least one of my levels seems to have lightmap corruption after porting it to 4.20. It’s possible that this is something specific to my project, but it’s definitely strange. Most things look fine, but a few surfaces are inexplicably either solid black or extremely bright.

I’m curious about the hitching/memory leak issues that a lot of people are reporting, since I haven’t been able to reproduce that at all across multiple machines. It seems like the issue might be difficult to track down if it’s really inconsistent.

please fix this too: 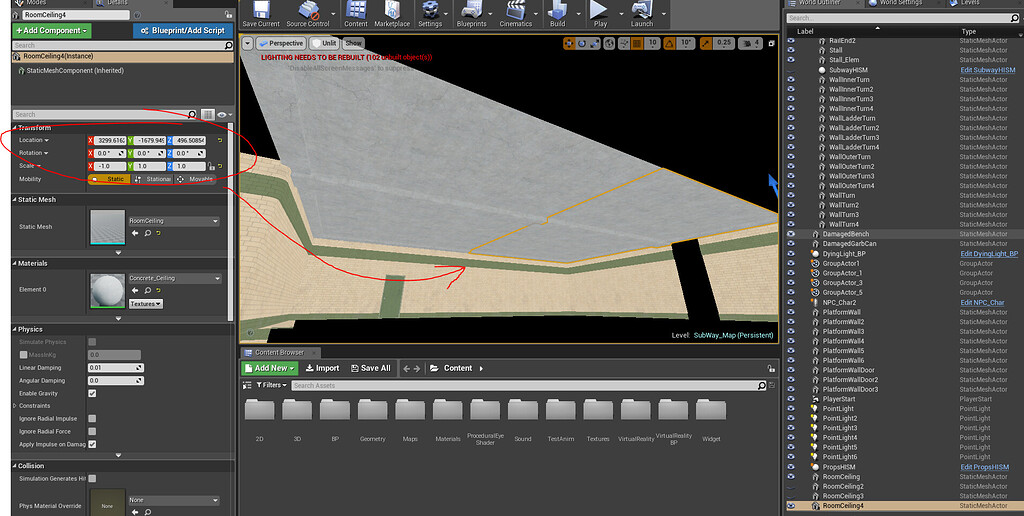 Aliasing on the Emissive surfaces

I’m working with the VR. and on the all anti-aliasing solutions TAA, FXAA, MSAA bad flickering aliasing effect. GIF attached

I want to add marker to the visit card for recognize this plain and further use it for add game mesh and tracking. Maybe I can straight add image for recognition but can’t find any bp/codes for it. a year later it was something as that The Human...

It has been requested since forever, to enable character BP to walk around spherical planets for sinlge player and multiplayer, right now it´s only posible with paws,

That’s a bit of a niche feature. Still, there are several plugins that enable this functionality. And it hasn’t been requested since forever. A few people here and there ask about it constantly, because they aren’t aware it’s already possible.

I’m getting a lovely bug where the whole editor UI goes super bright. It’s like every element is getting a brightness tint applied. Any one else running into that?

One more version where CLion integration is broken

Have to generate stuff manually again.

Still getting the following with 4.20 Preview 1:

Aaaaand the fix is scheduled for 4.21…

I would like to point out that an early version of the Geo 2.0/Mesh Editor is in this version! You can enable it by entering this command “MeshEditor.Enable”

There’s also a lot of new Blueprint nodes as well under “Editable Mesh” which are related. I don’t know how to use these though.