The video doesn't show in unreal 5

Hi, I am learning how to use Unreal Engie and I have recently completed the tutorial on how to place a video inside the level:

The problem is (and it may be because I’m in Unreal 5) the video doesn’t show (the default mp4 that comes with unreal 5); it goes blank. I know it is playing because I subsequently added sound playback and the video does play, but the texture stays blank. I have looked at other tutorials, but the result is the same, what am I doing wrong, would I have to activate something additionally for it to be seen?

I can send you images of what you want, but you have to know that I can’t preview the video inside the Unreal engine either (although maybe that’s normal).

Hi! I recently did same, and I had similar issues, so don’t worry this can be solved! So what you should do first and above everything is: after you made your project make a folder in content called “Movies”. Then you should put your video in that folder, (not just import, drop them in the Users/Documents/UnrealEngine Projects/YourProject/Content/Movies, and then import them. After that you want to make a media player which exports texture. (Right click in content, in movies folder, and create Media>Media player, then tick box option under it. Then you want to make material texture out of that exported media player texture. Under details of material you should change option blend mode from opaque to User interface, ater that drag material into RGB and it should work, then, well then you either make plane or widget that will stream texture, and you need to make variable of your media player (the type is object refference to media player) and use it to stream texture. I think I can’t properly type all of that, BUT How To Display A Video In A Widget | With Audio - Unreal Engine 4 Tutorial - YouTube this guy is amazing and explained it step by step. (Also forgot to mention some videos are not working in UE for some reason, check that by opening media player and playing video, if it plays it works) Then you want either plane either widget blueprint that will stream that texture. Also if you would provide pics of how you connected your widget/plane to stream might help me out to see where is the issue, when i had same issue and i did everything how it should have been done (or at least I thought so) all I did is re-do everything (as its not that much of work) and it worked :)!

Hi, it seems that the problem is in the player as I have downloaded several videos to test and none of them can be seen (but heard) in the unreal player. How can this be?
I downloaded the ContentExamples and the Unreal example video (which I was also using) does play smoothly in the example.

What format are the video files you are trying to play?

Be sure to take a look at this matrix

Hello, thank you for replying. As I comment it is the mp4 (with the unreal logo) that comes by default with unreal.
I am not able to see any video in the player, I can only listen to it. I guess this is the problem that prevents me from playing in-game videos. 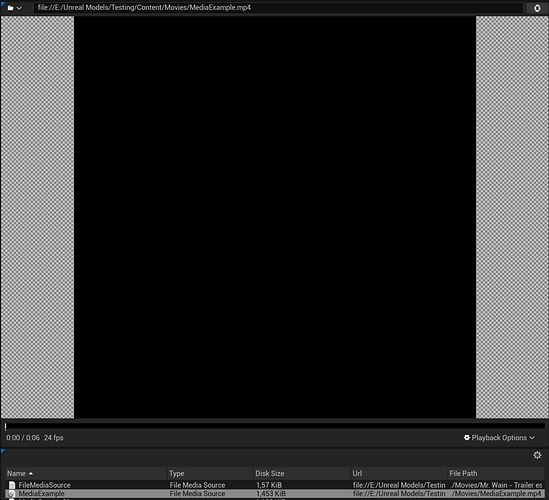 Does anyone remember where the video sample is in the “Content Example”? Now that I’m looking for it, I can’t find it and I’m wondering if it exists or if I made it up.
Either way I’m going to try creating a new project.

Nothing, there is no way, I can only hear it but not see it, no matter what project I create.

In ContentExamples 5.0 I’m seeing the file in \ContentExamples\Content\Movies\ (You need to open this with file explorer to see it, not the content browser) and like Daniel said, it’s important to have your videos in the \Movies folder

Try to set it up again following this tutorial - let us know how that goes.

Nothing, no way, I start from 0 but I can’t get past step 9 (Double-click on the SampleVideo in the Media Library section.) I download the sample video from unreal, I follow all the steps correctly but I only hear it but I don’t see it in the “Sample Media Player”. 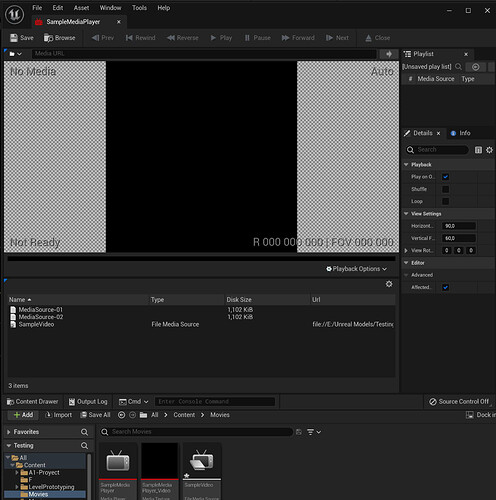 I have my Unreal learning projects on an external hard disk, could that have something to do with it? the truth is that I am not able to understand where the problem is.

I also noticed that the playback line does not move when playing the video like in other video players such as YouTube, is this normal?
I’m going to open the “Virtual Studio” project because it looks like it has a video inside one of the levels.

In Unreal’s “Virtual Studio” project, the video works perfectly, why? It seems that everything is the same as in my test projects. 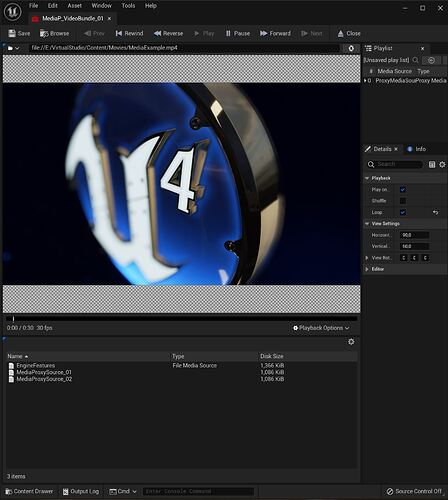 I just created a new blank project in UE 5.0.1 and moved the ContentExamples movie over. I’m also getting stuck on step 9! (Just a black square with audio when double-clicking on video in media player)

In this situation, it might be best to submit a bug report

This might be a wild goose chase : but opening the VirtualStudio’s .uproject file with a text editor to see what extra plugins might be enabled could help. Also try to spot and differences in media player settings/setup

Hello,
I see, so it’s a bug in 5.0.1. So I have to send a bug report? How do I do that?
I don’t know how to use the text editor to see what additional plugins, but I wouldn’t know how to recognize them either. Yes I have been looking at the differences between configurations and the only thing that seems to change is the use of proxy resources, but it doesn’t seem to influence whether they play or not.

I have already sent the report, do they usually reply? How can I know if they fix it?

Hmmm guys, do you have any stock videos? Perhaps try to drop in some video’s that are not from there and check is it working with something else, while I was working on my project I had friend mail me videos in certain compression that I couldn’t open with Unreal in any case, later he just changed the
compression, sent me same videos, they worked perfectly, so try that out I guess. Also when you plan on packaging your project, it gets interesting there, notify me when that happens so I can provide with some screenshots of settings that worked for me!

Hi, I am working with the mp4 video that unreal has by default, this video is used to complete the tutorial but, as we have already said, the latest version of Unreal seems not to play correctly any video, are you sure you can play a video in the latest version of Unreal, is it possible that it works for you because you are using a project migrated from the previous version?

Played it in Unreal 5, had many issues with it but yeah, I can provide you with Printscreens of how I did it if you wish? 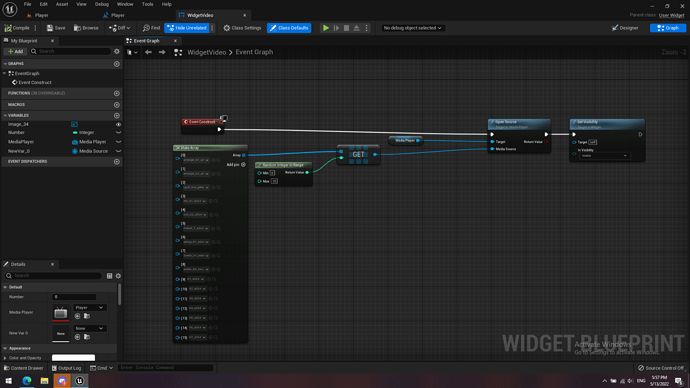 I wanted to do randomise for videos thats why this array 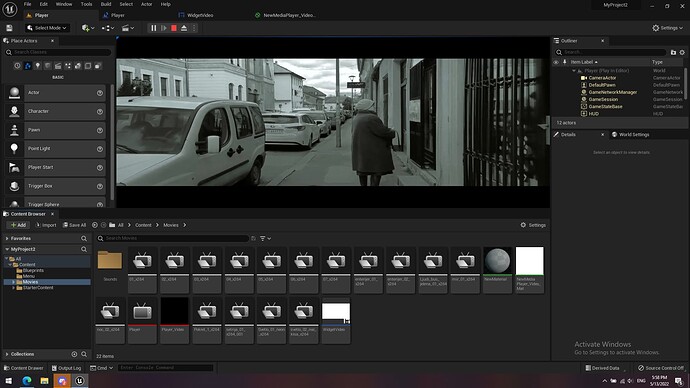 here is video playing, also you can see folders as I said above how you should organise them

Also don’t forget to add part where you create widget and add it to viewport!

Also forgot to mention project is created in UE5, and finished in UE5 as I my self wanted to that in UE5 after transfering from UE4. Just for the record I’m also newbie here, and just learning the engine

Every project has a .uproject file that you use to open the project. In the Epic Games Launcher you can right-click on your project and click “Show in Folder” to open the .uproject location.

I just thought that maybe the VirtualProduction sample might have some fancy video plugins enabled that work around this.

As for the bug report… The best-case scenario is that you get a reply within about a week that gives you a link to the bug they created (or a link to the existing bug) on the public tracker https://issues.unrealengine.com/

Hi, thanks for posting the nodes you used, thanks to you I’m sure many others will learn too. However, I guess I still don’t quite understand how you did it.
I have created a Blueprint widget and placed the nodes as you did: 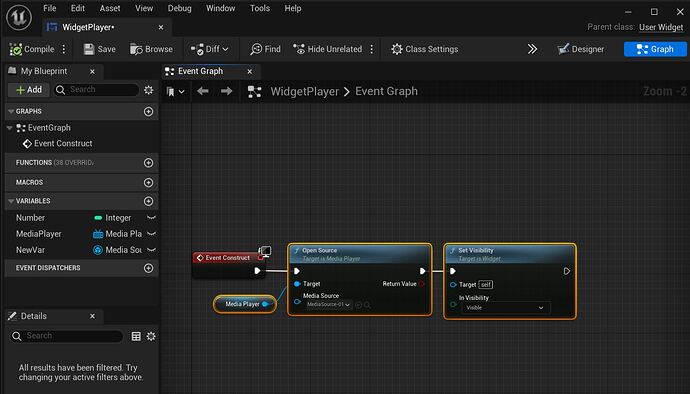 However, I think I still need to know what elements you placed in the WidgetPlayer so that I can watch some video.
Also, can you think of how I could do this procedure but take it to a texture? The original idea is that the video would play on a game screen.