Shadow disappear when I build light

I’m making a nighttime scene and I placed three lights near three bushes for their moving shadows to be on a house wall. When I build the level, build light, their shadows disappear. I place the bushes with the foliage tool, what did I do wrong? 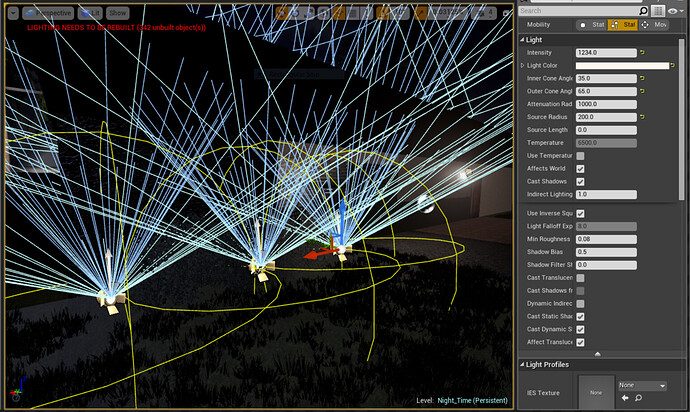 The lights just wasn’t being built, so I ended up deleting them

IF it is not a Building bug to solve problems with shadows, sometimes you just need to set the light as movable, like here:

I’ve tried only static, then only stationary, and lastly only movable. Nothing works, I even added a small lighting volume to the area. After that I gave up and deleted the light in the area.

check if the bushes are settled as movable objects.
If not, the shadow will no work, Also, be sure your lights are settled to Stationary, not movable as I said before!
Please check it out and let me know, thanks

the meshes are different? If so, maybe they are not checked to “cast shadows” inside the mesh properties. Just guessing, it is strange indeed.

I set the bushes via the foliage tool, and yes they’re moveable. Those set of bushes don’t work, but the others do. It’s strange

No, it’s the same mesh. Also yes, the mesh is checked on “Cast Shadows.” It’s strange that it is not working, so I just gave up on it because I tried everything I know and it took 5+ Hours to build my small level. It’s alright. Thank you

Sometimes it appears to be a bug. You build and encoded shadows simply do not appear anyehere.
Solution: just reset all the dynamic shadows paremeters in the Cascaded Shadow Maps sections. Of course, we’re talking Stationary Light Scenario.
This tends to happen most of the time if you already worked out a level with pure dynamic lights and then saved as to another level to focus on one area and decided to move to staionary light and build shadows.
Hope this helps.