after realising that HQ had to be on to enable shadow casting, I turned on both - the lighting effect can now not be seen at all.

simply turning on high quality lights seems to disable the effect all together, whether I have shadow casting on on not - am I doing something wrong? cant seem to find any answers on google relating to this, even the docs don’t mention the high quality setting.

Works fine for me though, be sure that the light doesnt get spawned inside an object, because it wont really cast shadows that way.

Also, as far as I know, it might be better for performance to actually emit the light trough blueprint instead of cascade.

Thanks, I double checked this by making sure the spawn point was outside the object. But still, even within the particle object viewpoert with geometry on, at high quality it doesnt emit any light in the scene?

I just tried by adding a completely new particle system, enabling HQ lights and same problem, no lighting whatsoever. could this be a bug in 4.12.2?

It requires higher values in settings to be visible 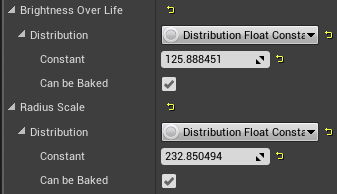