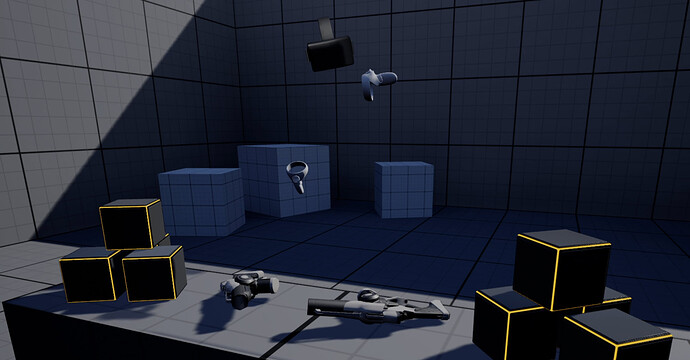 We’ve redesigned the VR Template for OpenXR and we invite you to join us in this journey towards standards for VR and AR development!

Check out the DOCUMENTATION for information on supported devices and systems.

Feel free to ask your questions, submit feedback, bugs, and experiments in this thread!

The new VR template is great and a big step up in the right direction. It would be amazing if more functionality and features are introduced in the future. I think the following features would be great:

How is the performance on Quest 2 ? Is it only for directional light ?

Dynamic shadows on Quest are still very expensive - it would be difficult to design a full game with
dynamic shadows, but it could be used for simple stuff with very few draw calls (model viewer, etc).

It’s great to see support for VR still taking place…things have been quite lacking in regards for VR for quite some time. Looking forward to all the updated VR features as they come.

Currently I’m still using UE4.26 for VR for now until the many Plugins I use are updated for UE4.27… OpenXR looks to be the answer for VR going forward.

Hey @BladeMaster! While the Template itself won’t see many feature updates since it’s intended to be bare-bones, we’d like to provide content examples for VR. They can get as complex as we want them to be, and can continue to receive new feature updates.

Feel free to continue to drop your VR Content Example suggestions in the thread as you think of them.

Hardly anyone will know what xr development is and it’s less visible under platforms now. Can you please put vr back in the title at least? This forum is quiet enough as it is.

Also kind of related but for a long time now it feels as if epic are neglecting vr. Many things are breaking or not being supported as time goes on. I don’t think anyone expects everything to be well performing but it should at least render correctly in vr for both eyes.

Thanks for the work on the template @VictorLerp, please convince people at epic to improve vr in general as unity is starting to become more vr friendly compared to unreal now.

Edit: Just finished watching the stream you two did. Very interesting and the template looks great with some really good features. It’s nice to see vr getting a bit of attention again.

Will do, thank you!

Does it mean that Oculus Quest won’t work with the template? I run the template, but I can’t see hands and I can’t grab. But I can teleport… how/when it can be fixed?

The template has been verified to work for Oculus Quest. Can you provide some more details on what your problems are?

The Widget Interaction Component is doing something strange for me:

Showing the debug I’ve just realize it’s not in the same position depending on which eye you have opened…
And when you look with both eyes it’s uncomfortable.

Is anybody find out that too ?

I’m unable to reproduce this. Could you take some screenshots using Oculus’ or SteamVR’s compositor with both eyes displayed? Which device are you using? 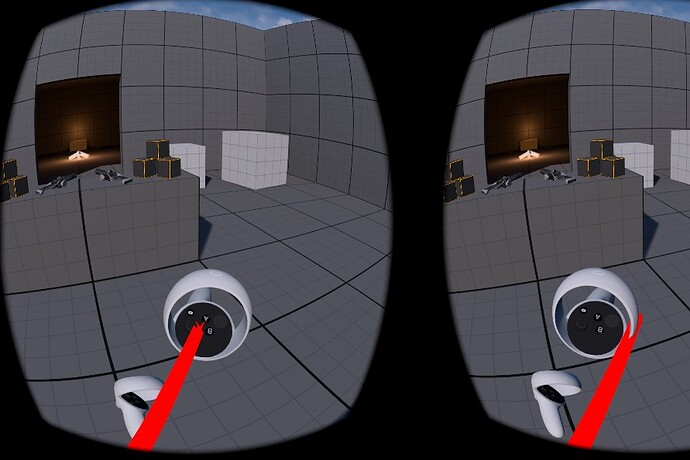 Watched the VOD twice it was so good Victor and Alex!

The widget interaction doesn’t reset to the left hand after hiding the menu, with debug on it seems to freeze in the location it was at when the menu is hidden, seems like something you’d want to fix for the template for ease of use. Anyone have the fix btw? I’m only starting with VR and generally only a year or so dabbling with unreal.

Something I fixed which is just rotator and assume is because I’m using the og Oculus Rift and controllers, the pointer seemed off, so I had to rotate my hand right IRL to get the menu cursor to point where i wanted. As said fixed that just rotating the widget interaction childed to the controllers to fit my current set up, which might break other controllers widget interaction? I cannot test that though.

A few things that would be super useful in a VR content examples would be the “force” pull effect, I’d assume could be done with a sphere trace from the grip angle looking for actors with that grab component (I’ve started to love actor and scene components, that with additional graphs is just the cleanest code in BP).

Also the grid and snapping actors like in Oculus Home. Just a couple ideas from always ending up in there with Oculus’ hardcoded right menu button. lol

And as both hosts said in the video, some best practices / features of Robot Recall (which i should really play again soon) would be amazing in content examples. Really talked up the shotgun made me wanna play.

My current project has me currently deconstructing how a old VR asset worked so i can maybe change it to a scene/actor component and recreate its function/features in the new template, so I renamed your inputs to start with which hand it is (makes search in graph easy with “Left_”/“Right_” filters everything in engine out that has left or right because the underscore

) and added all the rest of the VR buttons. I will need to add the other HMD controller inputs later.

Which has me curious if i should add those buttons to your BP Interface. From the looks of it, with the primary/secondary its for communicating grabbed actor functions, ie. the gun firing?

Sorry for the essay just having a blast with the new VR Template, great work!

Suggestion: It would be nice if the Motion Controller component > Visualization was responsive to World to Meters scale out of the box.

This may not be possible, to get things to work as is: I need to manually scale my controllers “Set Relative Scale 3D” using .01 as a multiplier to whatever my World to Meters scale is set to (default 100).

As well as adjust the GrabRadiusFromGripPosition using .06 as a multiplier to W2M scale. To get the grab implementation to scale with the controllers.

Is there a better way to do this?

@VictorLerp another funny/cool thing, i duplicated the menu to create a floating window for another menu type and had to delete its cursor, but the cursor from the hand menu will move to other 3D widgets, so it is kinda universal, now to create different textures/materials for it lol.

But if the wrist menu isn’t active, the widget interaction doesn’t trigger buttons on the new world menu.

Anybody having the same problem ?

I have the same problem. Did you solve it?