I implemented an input control with the xbox one gamepad using the right thumbstick as a “snap” turn (in 30 degree increments).
This was using “Gamepad Right Thumbsick Right” and “Gamepad Left Thumbstick Left”

Is this by design? Is the Motioncontroller Thumbstick on the Oculus Touch only an axis mapped control?
I was also planning to use the “up” and “down” for weapon switching, but I cannot do that either.

(P.S. I have the Vive controllers working, so I know my motion controller setup is OK).

I think I am trying to figure out the same thing. I just got my Oculus Touch controllers yesterday and can’t figure out how to map the joysticks. I want to be able to use the 2 joysticks just like the Xbox one gamepad to move around instead of using the “teleport” movement but can’t seem to figure out. It sounds like that is similar to what you are trying.

Moving around is fine for me (using axis mappings… have a look at the first person template for examples).
Its just that I can’t seem to map action mappings to the thumbstick.
Just wondering if this is by design or not implemented… 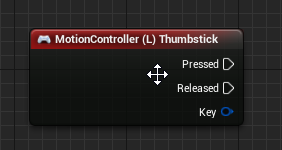 This appears to be work right for left thumbstick press.

But this one doesn’t work:

Hmm soo many events, so confusing

The captouch is triggered when oculus detected a finger touch.

Yes, I saw that in the mapping options, but I though the “motioncontroller” mappings were to be somewhat controller agnostic.
Hopefully this will be implemented soon.

I can’t see this being a hardware restriction, otherwise it seems like a waste of actionable controls.

I edited my post, sorry it was 1-2 months ago i was messing with the touch kit

Is “MotionController (L) Thumbstick” the action of pushing down or “clicking” the thumbstick?

If so then it won’t help with the “snap” turning plans I had. I will try it though (later… as I am at work…)

Yes, its the pushing down for the thumbstick, gives you the clicking sound

So, maybe one of the devs could confirm…

Are the following not currently implemented or working for Oculus Touch as action mappings (as of 4.14)?

So, maybe one of the devs could confirm…

Are the following not currently implemented or working for Oculus Touch as action mappings (as of 4.14)?

I looked at the source code on github and they are implemented for OSVR only.

I wonder if there are any plans to include this for touch in the main branch?

I’ve stumbled upon the same problem. Are there any news on including this, or do we need to work around it?

I do not want to use the meager selection of touch buttons to do snap turns… I’d rather reserve those mappings for something else.

Is it a limitation of the touch hardware?

Yes there is. You can easily turn an axis control into an action-like control just by checking whether its output value, which is mapped to the -1.0 → 1.0 range is, say, > 0.5 (for right or down) or < -0.5 (for left or up). Make the threshold level variable so you can adjust it as needed, but 0.5 means the stick has been moved half a way or more, so it should do the job.

I just implemented something similar to discretely control an up/down movement and it works exactly as an action. If you like you can also create your own custom input event with this logic and trigger them as needed.

Many thanks for this suggestion!

All the best,
Gary.

Here’s a quick screenie of my prototype…

Total noob question here…but what is this node you used for comparison and how did you make it? lol

This is float > float. Right click on the blueprint and type > (greater than character), it should show up.

Unfortunately the proposed solution in this thread is not something I can implement. The “proper” events still don’t work, do they?