they are no Cinematic Depth of Field in unreal engine 4.20
where did it goes?? 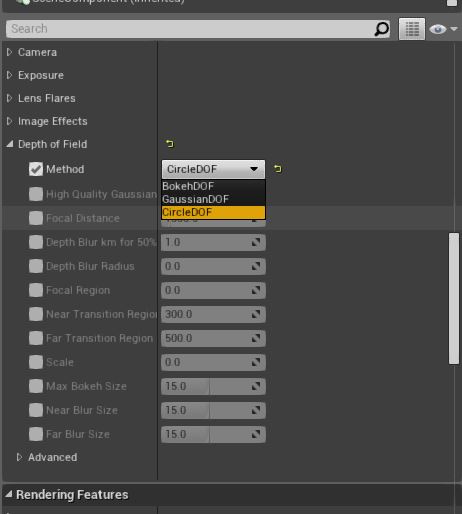 The instruction says:
This depth of field method replaces Circle DOF as the default cinematic method used in Unreal Engine 4, version 4.20. It is enabled by default on supported hardware

And in the subject:
Cinematic Depth of Field is enabled by default and replaces the current selection for the Circle DoF method in the Camera and Post Process settings.

is that mean Circle DOF in the settings in the image i showed is Cinematic DOF ?
and the default DOF in post prosses is Broken DOF not circle or Cinematic DOF

If you’ve selected Circle DOF in the image you show, then Yes that is the new Cinematic (Circle) DOF method.

In the setting, yes the default is set to Bokeh but it’s not automatically enabled because you have to apply a Bokeh Shape texture and set a Bokeh Size to actually use it. Keep in mind that in a future engine version (4.21 or 4.22 most likely) that Bokeh DOF will be deprecated. The goal is to have only two DOF methods; one for Mobile (Gaussian) and one for Desktop/Console (Cinematic/Circle DOF).

The old Circle DOF method is going to go away at some point too, which right now Cinematic replaces.

Is cinematic depth of field not supposed to support alpha? I opened a new 4.20 project and tested it on the standard meshes (chair, table etc). But it does not work for the statue which has transparency