Material Emissive Colour not showing when created with draw material

I am trying to draw a material on my HUD using DrawMaterialSimple as shown here: 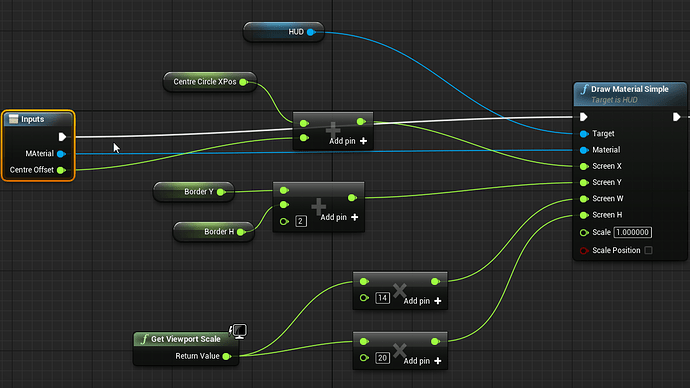 This also occurs when the material is applied to an image component in a UMG widget:

The material I am using has an emissive colour to give it a glow effect (based on this example: [link][3] ) 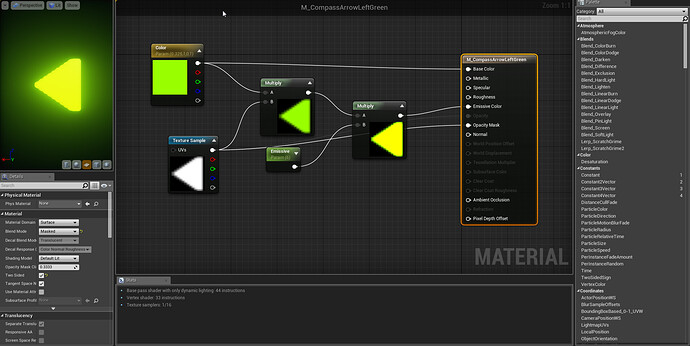 However when I run the game (using play in new editor window and standalone) the glow is not present:

Is there something I am missing in order to make this effect appear in game or do emissive effects not get applied to materials that are not on a physical mesh?

I have the exact same problem…and it’s kind a big issue, because I am working on a Sci-Fi project.

HUD and UMG are drawn on top of the game world. Tonemapping, bloom, motion blur, etc. do not get applied to the HUD and screen-space UMG widgets. They are also drawn with with an sRGB buffer, so values outside of 0 - 255 will be clamped (and they aren’t in linear color space).

This is generally what most games want, but not always what games want. If you want the game world postprocessing effects to apply to your HUD, you will need to have your HUD exist in the game world. You can try the experimental UMG actor component and set it to world-space. You may also need to modify the material it uses to draw in order to get it to emit very bright colors, I’m not sure.

Another alternative you might try is to pre-create the glow effect you want as a static image, and just display that in your HUD like normal. Yeah, it’s “fake”, but it will make things a lot easier.

at first I want to thank you for your answer. In some way this seems to make sense, but I’m a little bit confused about the fact that it was once so easy to apply that. Just that one little ticker box “Use for UI” in the material. But no problem we will grow with the challenges

I already thought about the method of using static images. But the problem with this method rises up, as soon as you want dynamic HUD elements. Something like a pulse animation etc. and even if with the usage of sprites it’s an horrible act while prototyping. Because it isn’t an efficient way of testing my effects.

I’ve also tested the UMG actor component with world-space settings. Two problems there: 1. I still didn’t get any glow/emission 2. I’ve got something like a motion blur on the elements, while moving the camera. (Could be cool if you want something like a “I-am-drunk-effect”)

About static images being difficult to prototype: yes, it’s not ideal. It requires more work ahead of time. But it’s still possible to do effects like pulsing. Layer 2 images and fade the top one in and out to simulate pulsing.

About the world-space UMG component: that’s what I guessed would happen. You will have to alter the material/shader it uses to allow it to draw unclamped colors into the game world so that it glows. As for the blurriness, this is caused by the temporal anti-aliasing. There’s no easy way to fix that right now. If you are drawing it as a strictly 2D HUD then it’s probably better to pre-bake the glowing effects into your HUD images.

Thank you very much. I will give that a try and will let you know if I’m able to come up with a solution.