Having played with Lumen and the material editor for a while this morning, it sorely stood out to me that Lumen does not use any of the existing Switch/Replace nodes in the Material Editor, nor does it have its own.
Currently, if one would want an emissive surface to be 1 intensity on-screen, but 1000 intensity for Lumen, that’s not possible, while it’d be an incredibly useful control to have for artistic direction.

1 Like
UE5 LUMEN is there a way to stop emissive materials from casting light?
Possible to turn off Emissive Material for Lumen GI?
How to remove the light on the ground when character still light up when using emissive color?
Megascans MS_Default_Fuzz_Material not working with Lumen GI (most rock assets)
Lumen GI and Reflections feedback thread
Lumen GI and Reflections feedback thread
Phyronnaz May 29, 2021, 9:44am #2

On ue5-main there’s a LUMEN_CARD_CAPTURE define, so you can do something like this in a custom node:

I’m a total novice with custom nodes but I tried your idea with, what I think, is correct syntax.
Getting and ‘Undeclared Identifier’ for ‘LUMEN_CARD_CAPTURE’.

Would you be up for playing around with this for a min and seeing if you can get your idea working?
I know there’s a few posts that have already requested this feature, so at least a few people would be grateful. 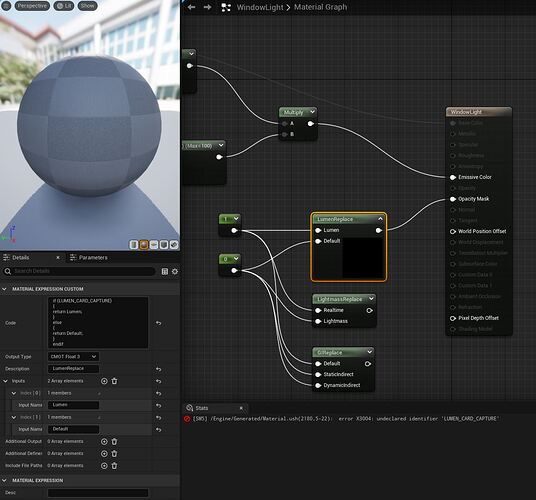 What Phyronnaz put in his post is the exact syntax you want in your custom code block. Hashtags and all. You don’t want to create a regular 'ole branch, you want to define a switch, hence the hashtags and endif.
On top of that, keep in mind that it only works on ue5-main. If you’re using the launcher build (ue5-ea) it won’t work.

Thanks, I would never have known that. I’m just using the EA build from the launcher as you might have guessed.

cant get it to work. the emissive just goes away entirely if i pipe a 0 into the other input. if u use higher numbers the gi is there again in either input.
anyone else get it going?

much appreciated if anyone posts