i add some captures we took to show the trouble… can you suggest us some way to fix this??

We tried amplifying the most important faces in the UVs, giving to the lighninbg channels more pixels (2K) and also modifying the lightmass parameters on the direct and indirect lightning…

PD. the result when previewing on PIE is perfect… but the problem comes when we preview with android shader.
alt text 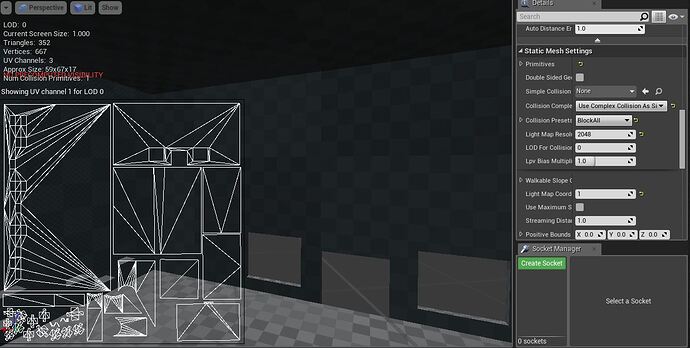 Does this only happen using VR, or does it also happen in 2D mode on Android?

HQ lightmaps has lighting brightness putting in alpha channel that has much higher quality than LQ that put same thing in RGB and compressed as DXT1. When you switch between SM5 and Android preview on PC it switches the type of lightmaps as well.

Uncompress lightmaps definitely will help. You can toggle off the flag of Compress Lightmaps in Worldsettings to enable it. But meanwhile it will significantly increase the weight of lightmaps

Blurring the lightmap actually helps too. That means smaller lightmaps actually has less bending issues than higher res ones with low quality texture compression. Also you can tweak Indirect Light Smoothness setting in World Settings to get lightmap “blurring” too.

From aritistic point of view, higher frequency texture patterns could help hide the artifacts better than even looking patterns , you might also need to aware of this.

It happens in both, even in the unreal editor when we turn the shader model into android. I think it has nothing to do with the camera or the actor… there might be some options we are missing out!

It worked when downgrading the size of the lightmap UV… but in exchange we obtain a less detailed ilumination.

This can be a good fix in newer versions, increasing time of build but not affecting the final performance and obtaining a soft and beautifull lighting details.

One more thing you might be able to try is increasing the PVR texture compression quality for mobile. Go to project settings-cooker and set it to bigger value(default is 0). It dramaticly increases the cook time and doesn’t effect the result in mobile preview on PC, so you need to check the result on mobile