This no longer works. Why? The source radius and length dont seem to do much of anything. The light is definitely not emitting from the source sphere/capsule. 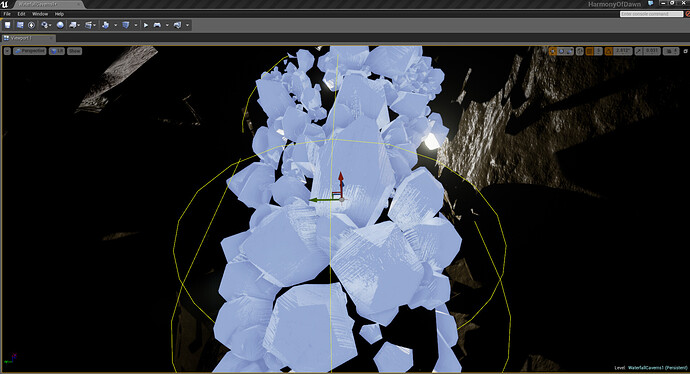 As you can see the source radius (yellow line) definitely encompasses this crystal formation, but the light is coming from inside it. I can turn off Cast Shadows, but then, obviously, rooms on the other side of this cavern get the light too, which breaks everything.

This isn’t exactly the answer to your problem but your best bet is to disable Cast Shadows for the object you want the light to work with. Light radius and length affect reflections only now, afaik.

Hmm, how is it messing with the lighting in other rooms? Looking at the picture, if you disable Cast Shadows for those rocks they wont cast shadows but the cave wall behind them still will, and prevent light from reaching unwanted spots.

Also, there was a post and answer about this in AnswerHub from beta times i think but no way i can remember where it is now. :\

Glad that it works!

Do we know if that is a permanent or a temporary change?? That seems ridiculous that there’s no other option other than a pin point light.

So sorry, I misread your post. I thought you meant to shut off the shadow casting from the light, not the meshs around it. Thanks so much! Now I can at least stop trying to adjust radii and lengths of lights