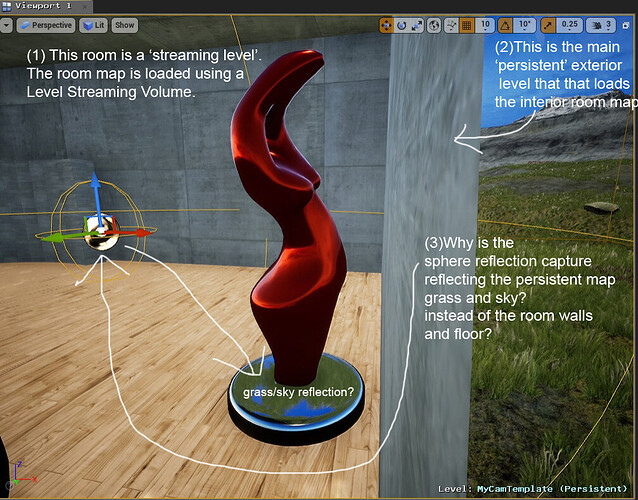 -using the sphere reflection capture in the room (interior) map only

-using the sphere reflection capture in the persistent (exterior) map only

-using a box reflection capture inside the room

None of the above result in the reflection capture reflecting the wall and floor on the shiny objects.

Is there a way to get the correct reflection on the interior map shiny objects?

( Note: setting the reflection capture to a ‘static cube map’ does not resolve the issue.
It will blend the dynamic grass/sky reflection with the static cubemap image.)

One thing you have to know is sphere reflection capture does not update in runtime, it’s reflecting based on your lightmap builds. Only planar relfection can update reflection per-frame in real time.

If you want to force updating relfection in runtime, but not per-frame, there is a way, first of all,

Your preset should be:

Reflection capture will only update on these particular cases:

Personally I recommand you storing lightmap into lighting scenarios, it will give you better control of it. So when you’re ready,

…and all you have to do is:

When something still turns out wrong (which it shouldn’t unless your engine version is old), you may try the “r.reflectionCapture” command to manually recapture reflections.

At this point you might though “well, how about the grasses? they’re not baked, but still reflected”. That’s because for dynamic objects unreal uses ScreenSpaceReflection (SSR) to capture it and blend into the current REFL captures. It won’t be an issue if you set up properly, but for some reason if you want to disable it, use PostProccessVolumes and check the ScreenSpaceReflection Intensity and set it to 0, this will disable it totally.

Thanks Daniels11.
I resolved the issue via elimination, and the solution was unexpected but understandable.

Basically, I had a ‘planar reflection’ for my ocean that was slightly over extended beneath the terrain and house.
That is where the blue sky and grass reflection was coming from.

If I simply move the planar reflection lower it’s influence is removed from the house reflections and everything is fine.