How to make an emissive texture cast shadows

There is a point light placed behind the player just for comparison, which casts the shadows that are visible in the screenshot. 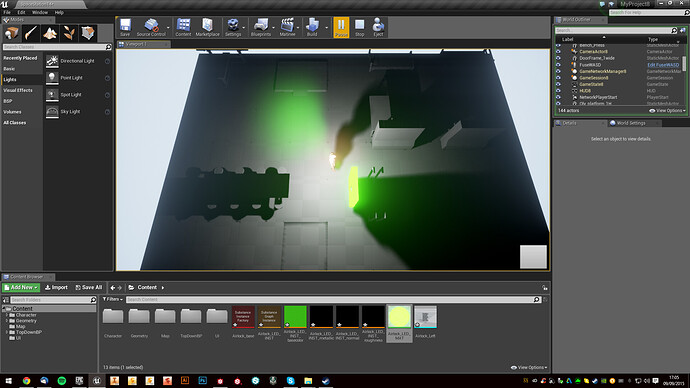 Hi Logan, thanks for your reply. The emissive texture is meant to be used on a door which will slide open. Is it not possible to cast shadows with a dynamic emissive texture?

To enable your emissive material to cast lighting there are a few steps.

1.) Create a material with an emissive color.
2.) Click on the object you have your emissive material on and go to your details panel
3.) Scroll down to the lighting section.
4.) There is a Lightmass Settings Roll out. Click that
5.) There is an option to " Use Emissive for Static Lighting"
6.) Click that check box.
7.) Rebuild lighting at production quality.

From what I’ve noticed the shadows are subtle so take care with the settings of other lights in the scene.

This only works for static lighting. So, for whatever object you attach this too keep it as static and not movable.

I think I will have to go with number one, I did try it earlier and it looks just fine. It is a shame that this feature does not exist for emissive materials yet.

I do not believe so. This feature requires of the light being cast as static and therefore if attached to a movable object would not work as expected. It can cast Dynamic Inset Shadows however as the lighting is baked on it may only affect other movable objects. No guarantees on that.

There area few alternative solutions. One is to create an emissive material and apply this to what you want. Then create a light in near the same space and fake it.

Two is to create lights without the emissive texture and have them act as your emission.

You could try making the doors separate and apply the emission to the frame of the door and see if that works.

As far as I know there is not a way to have true dynamic emissive materials that cast shadows at this time.