How to loop through different parts of a door blueprint smoothly?

So I have this door/wall of sorts that is currently made up of 2 pieces like so: 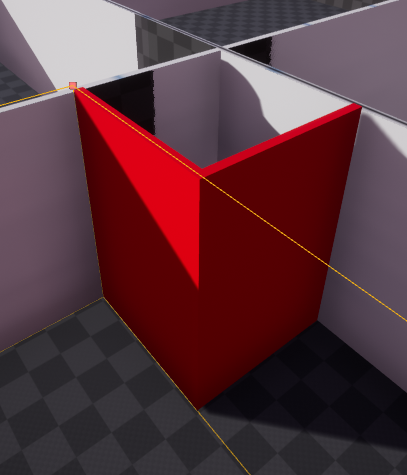 Currently the wall works with the following blueprint:

Each timeline is set up to run in 4 seconds with a 1 second delay between the first and second timeline. My question is that if I want to seperate these 2 walls into 5 pieces each and have one part of the wall go down one right after the other smoothy, do I have to create 10 timelines to do it or is there an easier way? For examples lets just start with getting both walls to go down one after the other, if there is in fact an easier way to do this.

Since you do not need the timeline to drive multiple objects simultaneously, you can reuse it:

With this, you apply it to as many elements as you wish.

edit: you can use Select node for the Lerp data and use the timeline track as Alpha, of course. I’m doing a weird thing here to make it faster.

If you need the Timeline to drive several objects simultaneously, you should be able to achieve that by creating multiple tracks in the same Timeline and offset each track by the desired value. It’s not going to be pretty but beats 10 separate timelines for sure.

You could also get a bit cheeky and use a vector for the Alpha value and split it, giving you the opportunity to move multiple objects simultaneously using just a single vector track:

With each track you can control up to 3 additional elements.

You could even combine this method with the re-usability suggestion from my first post but then it might be hard to read and debug. Still, beats 10 timelines.

So in your first blueprint and video how would go about it so that shortly after the first one starts to move the second one would begin to move? Because right now each one will complete it’s full movement before proceeding to the next one.

You’d have to look at my second example for the simultaneous movement.

There’s no way to add a timer of sorts to the first one? Something like after so many seconds fire the next one and so on.

You can add the Delay node once the branch goes False but the objects will move one after another. I believe that’s what you wanted in your original post.

Perhaps you do not need a timeline at all and can interpolate during Tick. That’s unless this is very time sensitive.

I have encountered an issue with timelines: they work differently in viewport launch and in a Standalone game, objects move to different positions for some reason, so I have to use Sequences or Vinterps instead. How do you make timelines as intended in various launches?

@Tuerer Sadly, I’ve never encountered an issue like that. If you do have a documented example, consider sending a bug report, the case you describe seems to qualify as one.