How do you create a segmented model with no normal seams?

I’m using a combination of Blender to create the animation/base mesh, ZBrush for the high res mesh, and XNormal to perform the normal map baking. In the game I want to be able to swap out parts of the mesh such as arms, torso, head, legs to replace them with armor.

I would like to have each “peice” be modular, so head, torso, hands, legs, and feet are separated into their own skeletal meshes. The problem I am having is normal map seams, and there does not appear to be any method of fixing them. When the mesh is not animated they look good, but the moment the mesh begins to move I get the seams when the model moves.

In the past I’ve devised “work arounds” that require an astronomical amount of work, but I cannot be the only one dealing with this, so there must be an easier way to handle it… I’d really rather not develop some complicated system of swapping out the mesh for “whole” segmented meshes based on the currently equipped items. 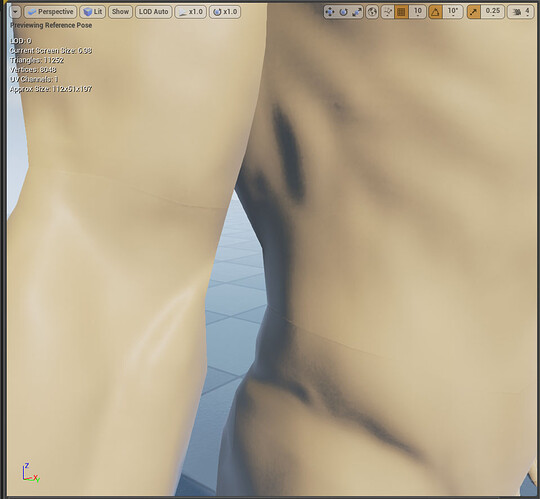 There is no way to completely eliminate seams from your model. There are many ways to hide these seams, clothes, map overlaying. What occurs is that the information on that seam is broken from one side to the next. 3D world, and local, space are drawn on a per pixel basis. Between where the pixels are calculated and areas where no UV’s are drawn this is what causes these seams. It sounds like you have already discovered workarounds to this issue and are able to execute workflows that work for you.

uuuuuuuugh… my face… if you could see it… would be exhausted… Yeah, I’ve pondered systems that could work… The best solution I can think of would be to have several meshes and swap them out according to the current armor configuration. So if you plan on having Head, Torso, hands, legs, and feet armor that would require 1 whole mesh, five individual meshes, and least 6 permutations of the character with (Head & Torso), (Head, Torso, Hands), (Head, Torso, Legs), (Head, Torso, Hands, Legs), (Head, Torso, Legs, Feet)… Besides adding “clothing” which the addition of “underwear” for male models could cut this problem down, and only focusing on the upper torso only. Female Models would be even easier with upper and lower “underwear”… I guess the solution is not that terrible…

Thanks for the answer and confirming my thoughts on it haha!