How can I fix Shadow Artifacts on my Terrain?

I have some 2 areas on my terrain that I created which are showing some really pitch black shadowy blotchy spots.

I have set the light intensity to 18 because I wanted it brighter but I’m not all that familiar with lightboxes and shadowing with UE yet. Still trying to learn and figure this stuff out better to develop my first game.

Could this be causing it somehow maybe?

What I am planning on aiming for though is something more like the stylized cartoony castle demo project sky lighting and I thought about trying to figure out how to copy that over but I’m not sure yet or even if that would have the same problem if at all.

The only other thing I can think of though would be the new landscape material I made based on [this guy’s youtube tutorial][1] but I’m unsure if that’s related to the cause of this problem or not. I don’t think so but I’m not too certain.

Can someone help point me in the right direction please? Thanks in advance. 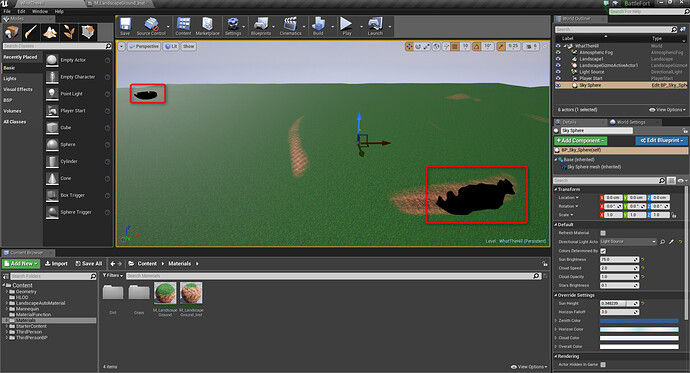 Update: Playing with it more I’ve realized this is a shadow from the terrain and I think it’s that dark from the intensity of the sunlight but I’d like to lighten it some.

However, if I turn down the sunlight intensity then the rest of my map gets really dark and looks bad…

I’m still going to play around with it to figure out how to make this better. There’s gotta be a tut somewhere maybe.

Create a new scene and see if you have the problem. Make sure you add a skylight. If you still have the same problem then post a screen shot of your landscape material.

What is your light source intensity set to?

Apologies about the delay. Been a bit busy with my day job.

Anyhow, so I have been testing it further as you suggested and I think you’re right.

I tried the autolandscape material I made in a new level test and same issue. But I’m not sure how I’d fix that in the landscape material if that’s the case since the only thing I can think of is either hand painting it myself or trying the material again to get more practice with it since I might have messed it up it seems.

Also, I didn’t have an actual skylight and the light source I do have has the intensity set to 17.

I also tried adding in a skylight just to see what would happen and the dark shadow area got a lot lighter but is still there though it looks more shadowy instead of being a big black blotch like it was before. Still slightly blobbly looking though instead of being more natural which is kinda strange.

I’m thinking maybe I messed up a setting somewhere that I probably shouldn’t have touched yet and that may have created the problem I guess.

I’m gonna also look for some lighting and shadow tuts to see if those help me understand them more.

Thanks again for the advice you’ve given. It’s been a huge help!

I found out it’s not my landscape material. It’s something to do with a setting or some lighting missing.

I tested it by migrating my landscape material and function over into the stylized cartoon demo project and found it worked and looked really good there like I needed but without the dark black shadow problems.

So I think now I just need to figure out and learn how to create similar lighting which is what I want or something like how they have it in that cartoon one and then I think it’ll look good as it should.

Making a stylized demo should largely be postprocessing. I have to say…a light source intensity of 17 is pretty high. I normally have mine set to 6.

Are you using static, stationary or dynamic lighting? You mentioned something about lightmass…

What is the intensity of your skylight set to?

I would recommend using a landscape that has more shadows…dips and valleys…to know that it is just shadows.

What is the goal behind your project? The reason why I ask, is because I am not a fan of auto landscapes. It has been a long time since I saw his videos, but I remember his material being heavier than it was worth. Being able to manipulate the texturing of your terrain without changing the shape of it, is an essential part of creating a believable world. On top of that, if you are interested in displacement, I do not even believe that he has it in his material. If you are trying to make something that would be lower quality, like a mobile game…then its not a problem, but if you are going for full scale visuals…then you are definitely going to want to be able to paint.

I would never use the landscape tools in UE4 to create a landscape. I would only use them to refine an existing height map. The best way to make a landscape in my opinion is hands down using World Machine. Then you can texture everything using a weight map, or weight maps if your using level streaming. The material that you apply assigns the textures based on the map, and then you can paint to refine things. Using weight maps is another way of texturing based on slope. Another way that you can texture your landscape is using a complex alpha. If you are interested, DevTon studio will be releasing something like this to the marketplace soon.

That’s my two cents on the matter

If you want you can send me a test project so I can see the problem first hand, because it would be easier to figure what whats going on.

Honestly, it’s a work in progress so I’ve started looking at lighting tutorials to try to understand proper usages.

I only turned up the lighting intensity because it was very dark still and I wanted a brighter cartoon-ish feel. Perhaps that probably isn’t necessary though due to the skybox not being there since it worked in the demo test so I’ll have to play around with that more once i get it up and running better.

I am pretty much learning as I go with this while watching tutorials and experimenting with it some to find something that I am happy with.

I’ll check out world machine. I see there’s a free basic version but I am wondering if that would even give me a good size map? Anyhow though I was I was messing around with this still purely inside of unreal engine until I figure it out better and to keep things simple but it sounds like you are saying the automaterial and sculpting inside it are a bad idea then?

The goal behind this is project is mainly to learn and grow my knowledge while making a slightly cartoony almost lowpoly game to practice development so that I can start kinda small without thinking too big about stuff hence i’m going for simple models and may expand on it in the future with more experience possibly. I also have plans to learn and add multiplayer to it as well and see what happens with it even though I’m not really expecting much from it but I just wanna make it for the heck of it to finally finish something.

Before I kept thinking way to big and never finishing anything. I feel like with this I am making some sort of progress even though I have to ask for help sometimes.

I think the main limitation of the free version of world machine is world size like you suggested. I don’t know this for sure, because I have never had the free version. Its a very reasonably priced piece of software though.

if world size is the limiting factor its not really a problem, but more of a pain. You could create multiple landscapes, with their own weight maps for texturing…then use the sculpting tools inside of UE4 to mesh them together. When you create a world inside of world machine it is based on a larger essentially infinite world. You can simply shift which part of the world your looking at to where the next portion is…that would make it easier to mesh the pieces together and still keep a good shape at the seam.

Again though…its not a very expensive program in comparison to something like Maya or 3ds Max. The professional version is only like $250. I understand that its not exactly chump change lol but its well worth it. I always use level streaming. Use a large world, because its a good performance test of everything you do…and if there is anything that needs tested on a large world…its your landscape material. My landscape material is pretty heavy at its full capacity, so I take steps to optimize it once I get the effect I’m looking for.

As far as auto materials go…they look attractive because of the ease of use. The problem is that they have an unnecessary heaviness to them. If you have a slope setup to texture between rock and dirt then there has to be a sculpted difference between the two. However, what if you want them side by side on a relatively flat surface? Sooo then you can add painting to your material. You could have just had painting from the beginning and used a weight map…created based on slope to texture everything. There are some amazing things that you can do with landscape materials, and if you want to fully take control of those, then I assure you that there is never room for things that you don’t need.