I’m working on a project where the OSC server is needed. I added the native Epic OSC plugin and set it all up only to discover that the plugin doesn’t work. It runs for about 30s to 60s and just stops receiving messages.

Some quick googling shows that this is a known issue for 3 years. Threads below.

It seems as if Epic made the plugin which doesn’t work and just abandoned it. So I’m posting to ask how does one post a known issue to alert Epic and see if it can be fixed. I don’t have high hopes since this isn’t anywhere near a mission critical feature, but who knows.

Here is the documentation on the plugin:

Here are threads below of others with the issue. I have tried the hack fixes that others posted and none of them worked. For now I am using someone’s independent OSC plugin and thankfully it works, but you have to compile it on your own in C++ and it would be great if Epic’s inhouse plugin just worked as advertised. (See that solution at bottom)

Hello everyone, I am trying to get a stream of data from Leap Motion to Touchdesigner and then output that data as OSC to use in UE4, right now I have a very basic setup in which hand position gets translated into object location in UE 4.25 . I managed to get communication setup well but I am getting a ton of crashes from this very simple setup, usually it takes less than a minute before it crashes. Does anyone know if it’s a bug with UE4’s built in OSC plugin? I’m usin version 4.25 because it’…

[302209-osc-problem.png] Hi I’m using this plugin from Epic: OSC Plugin Overview | Unreal Engine Documentation It comes by default with the engine and i just activated it. I’m using the phone to send data to Unreal but how you can see here: - YouTube it’s disconnecting after 30 seconds. Even if I don’t receive any data It’s disconnecting after a while. Could you help me?

I managed to receive OSC messages in BP and successfully print them on the screen. However, after tens of seconds, the printing stopped. It seems like the OSC Server only functions for a while or is there anything missing? 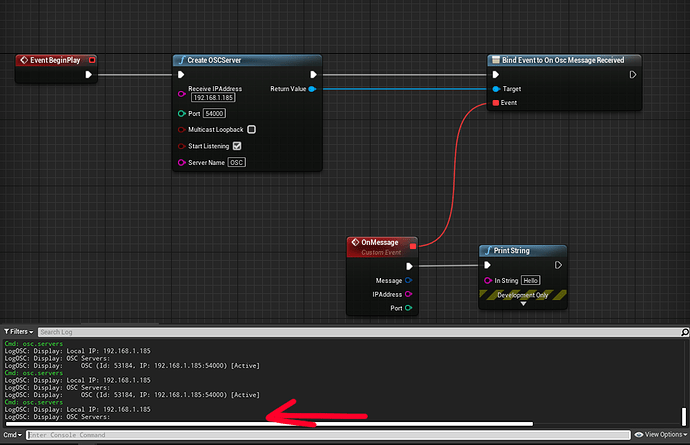 Current working solution: Use monsieurgustav’s OSC plugin that is rock solid. I am currently using it in UE 5.1 with no issues. OSC plugin for Unreal Engine 4 Blueprints. Contribute to monsieurgustav/UE-OSC development by creating an account on GitHub.