I’m doing a standard deferred decal setup and decal is hardly visible in direct light. I’ve already spent about 3 hours trying to solve this problem and read everything I could find on the matter.
But I haven’t seen anybody else encountering this problem. I’ve attached the screen.

So all other decals and maps I do are hardly visible as well. No idea what’s going on.

Either try to make the decal emissive, or you might want to try and enable dbuffer.

find ConsoleVariables.ini in Engine/Config and add this line:
r.DBuffer=1
In material editor you can find various DBuffer Translucent, something, something. Set to one of these.

You might also need to do this:
In project settingsgo to rendering and set early z-pass to opaque and masked meshes.

even with DBuffer on, decal Dbuffer Translucent and other don’t show up at all. It doesn’t work on 4.10 as well.
I might have to go as far back as 4.8.

I can get it more or less working if it’s a bright spot as regular emissive or translucent, but for darkening it’s just useless.

Hi dude! First thing first it’s a bad idea to put RGB channels into greyscale inputs as spec, metal or roughness. Use some channels from your texture that has the better look, You can see every channel if You open the texture and then turning on/off single channels. Then, You can multiply your opacity by some value greater than 1. Maeby make it parameter so you can handle it by material instance. Let us know it it’s the thing you searching for

Hey Onisanya, it’s just out of despair I started to plug everything everywhere I wouldn’t have done it normally.

Well, anyway. Lets drop fancy textures and just try to project something.
I’ve attached image of my efforts. BaseColor doesn’t get projected whatsoever even if opacity multiplied by 10.

I’ve plugged that pink to all other channels and I get this decal pink which only works if color is light, dissappears as soon as it gets darker. 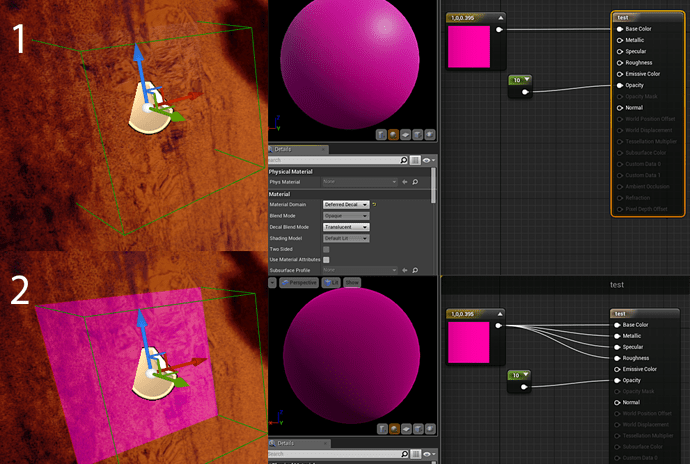 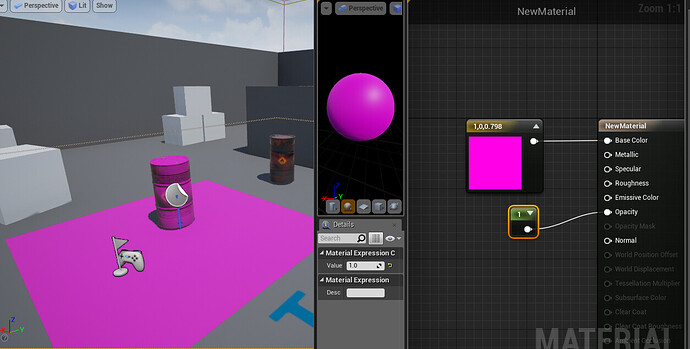 it’s really weird but I get the same problem with 4.10. Hm, I can start thinking about reinstalling from scratch.
I really envy your decal, haha. Thx for the help anyway!

Same problem, completely useless. What is the issue, Epic?