This is a set of 62 animations for building a rifle cover system for your game in Unreal Engine 4. It also includes 43 Aim Offset poses, to build precision aiming blendspaces. All necessary animations have 2 versions – with Root motion and in place. 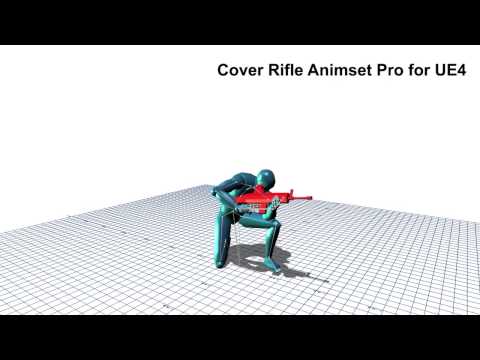 Swords/Sword and shield pack is next. It’s a little bit more tricky though, because the attack and get hit animations need to work together visually. And also the attacks (the ones for the player) need to be “explosive”, if you know what I mean. You push the button and it should be almost instant, yet still realistic. So basically, I need to test it in game to get the gameplay feeling right, before selling it.

Swords/Sword and shield pack is next. It’s a little bit more tricky though, because the attack and get hit animations need to work together visually. And also the attacks (the ones for the player) need to be “explosive”, if you know what I mean. You push the button and it should be almost instant, yet still realistic. So basically, I need to test it in game to get the gameplay feeling right, before selling it.

Great, I bought your movement pack and will definitely buy a melee pack as long as it have lots of different but realistic “attacks”.
I’m most interested in having various types of attacks to fit all kind of melee weapons. Let’s say sharp 1 hand and 2 hand for all kind of swords and knives. Something heavier for blunt weapons and something focused on piercing weapons such as spears. These should have side swings from each direction and possibility to channel/combo them into a new sing from the other side. Some Overhead attack and some piercing attack. Shields, like you mention would be nice too.
I think that would be more important for many games than spending to much effort into perfect impact animations that fit each weapon or swing.
I’d be happy with a few generic impact animations and the rest being various types of swings for various weapons. That way the pack would fit more games I think, being able to be used both in medieval and more modern game settings with appropriate weapons for the theme.

I understand the need for them to be “explosive” and I think it’s good that you keep that in mind, as long as they turn out realistic like your other animations I’m interested. I’d rather have a weapon with some delay like in real life when you swing something, rather than something too arcadish that instantly swings.

Looking forward to seeing what you come up with!

very excited for the lower body anims from that melee pack

very excited for the lower body anims from that melee pack

That’s a peculiar thing to say…? Like “I’m very excited for the left sides of the new tree models”

I’m dying to know why?

Sword and shield pack will be a definite buy (if they are not over the top and unrealistic). Looking forward to this

Add Knife, Pistol and dual Pistol anime and please add Dead to wake-up from Rifle and Movement. Thanks

Ok, the cover set is live on the Marketplace, after almost 3 months from submitting. Epic forgot to put some package details in the description (like the list of animations), but you can see them in the first post in this thread.

I will need all your submitted pack soon , very cool pack again
thank

Melee is all good, but what about an animation pack for pistols? Seems to me like people like using pistols in game dev, and so it seems like a rather reasonable pack to make.

I have made a pistol pack long ago, I just need to find some spare time to convert it to UE. I will get there eventually

By the way, it seems developers don’t really like pistols. The pistol pack sells terribly, in comparison to rifle or unarmed pack. Could be that people just don’t like specifically my pistols, but I see this trend in other animator’s packs as well.

Aaand… it’s possible to use the rifle animations and just tweak the hands positions with IK, so they hold the pistol. It looks very good, actually.

Ninja sword pack would be AWESOME

May I ask what Mocap system you are using?

This one was on optitrack, but like half of my stuff is vicon. There’s no difference in the end product really. Both systems, used right, produce perfect results with accuracy below 0,2 mm (depending on the mocap volume of course).

it is the Movement Blendspace example include in the Pistol animset pro? https://www.youtube.com/watch?v=trcDvrVx81U

Hi, yeah it should be included. Of course not this exact Blenspace, because this one is for rifles, but similar, with pistol animations. I mean, I included it, but I have to ask Epic to assign my package to my account, so I could check what they uploaded and what they discarded.

Anyway, making blendspaces is not hard, it’s just dragging and dropping the animations. Takes like 120 sencods to build this one :). Use the video as reference.

One more thing, I just remembered. In rifle and pistol sets the right index finger is straight, because that’s how you properly hold a gun. Trigger finger always off the trigger, unless you are actually firing. Most of you know this, but I get a lot of “what’s the deal with the figer” e-mails. But if someone wants finger on the trigger, just override the pose of the figer in the Anim Blueprint.

I again, blendshapes are including I was save 120 seconds of my :p. sorry for hijack this post. The price/quality is awesome but… will you include a crouch movement in pistol? even like a extra pay addon will be ok.