Checking if Player is hit by Light

Hello,
I am currently working on a Horror Multiplayer Game and have to program a system that checks if my Enemy is hit by the Spotlight i used as the Players flashlight, because my enem is naturally invisible and can only attack when hes invisible, so if he gets lit by the spotlight he would be turning visible, but i found no way to properly detect if my Enemy character is getting lit or not.

Also, from the bottom of this page which sounds most applicable to what you’re looking for.

When a Line Trace is not enough, you may get the results you are after by using a Shape Trace instead. For example, maybe you are creating a “vision cone” for an enemy and you want to detect players that enter it. A Line Trace may not be enough as players may be able to avoid detection by ducking under the Line Trace.

My problem now is that it gets hi, but when i try to cast it to my Monster to get visible, my cast always fails.

i look if it solves my problem

not if i dont tracehit it with an turned on flashlight

you should make a branch in the hit result and check if the hit actor is that monster. If that check returns false then make that monster invisible again. 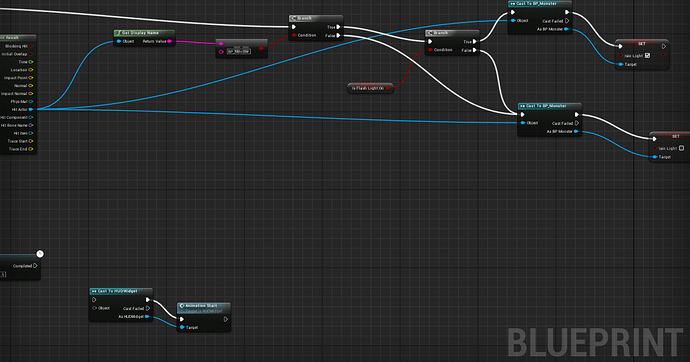 I checked it, the “Monster” only goes invisible when hitting it with a TracebyChannel while the light is turned off.