Can't get material to emit light

I have a simple light mesh in my scene that is supposed to emit light but I just can’t get it to work. I did some googling and searched around here in the Answerhub and tried the following so far, with no result:

The mobility of the object is set to static and “Use Emissive for Static Lighting” is checked.

Bloom is turned on in Post Process Settings and the threshold is set to 0.

The following is connected to “Emissive Color” 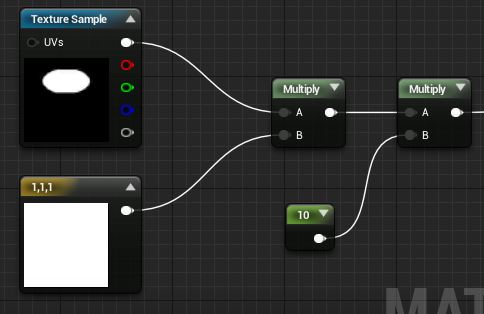 This is the furthest I’ve gotten so far:

If it helps, it takes a second at most to build lighting, as if I had no light in the scene.

I can get the result I want by simply putting a static point light in the mesh and baking that instead but I would like to know if it’s possible to get an emissive material to affect the objects around it.

Using the setting “Use Emissive with Static Lighting” will only emit light for baked lighting. This is not referring to the mobility of the object, just the light.

If you need dynamically lit emissive lighting that can be injected into the scene you will want to investigate using Light Propagation Volumes. This is still not considered “Production-Read”, but it’s a starting point to look at.

Thanks for the answer! I’ll take a look into LPV’s.