I want to simulate a vintage long persistence phosphor VDU. I can do it in flash and in unity but want to know if it is possible using unreal engine 4. I don’t know enough about it to know where to start. Can UE4 do text effects? can I draw lines on the HUD? Any help appreciated.

Sorry I am not sure what a “long persistence phosphor VDU” or even just VDU is.

Drawing lines should be doable using the Draw Line function in blueprint.

By “text effects” do you mean things like outer glow and shadow? There is no premade material to do it but that stuff should all be pretty easy to set up since our font materials are already using distance fields. Once I know if thats what you meant I can show you an example.

LOL. A VDU is what we called monotors back in the olden days = Visual Display Unit…
The old terminals had phosphors which lasted a while to give filter out flicker because of the low resfreh rate; HF electronics was quite unrelable on those days…

Heres an example. Tremendous thanks for your prompt response. Ah cool, I do remember that fading text from old 386s now that you mention it

There is no automated system for doing that but everything there looks doable. You would have to build some blueprint macros that handle things like “erase” which would internally set the color to much darker and fade it even darker until eventually deleting the text.

In terms of getting those pixellated fonts, you need to make a new font material. I decided to take a quick stab at it for fun. I just create a “TextRender” actor, found the material and duplicated it and changed it to translucent and did the following stuff: 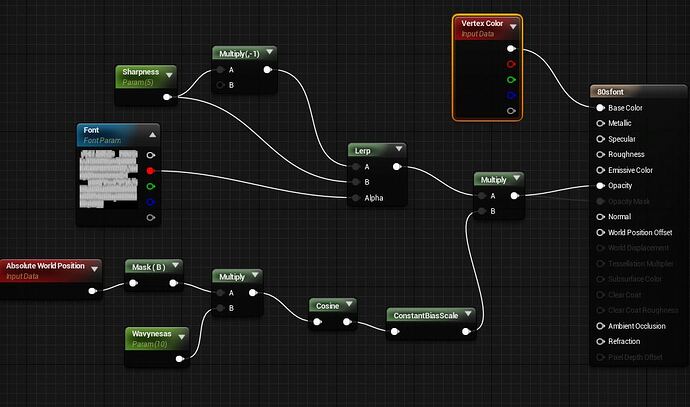 Then by changing “sharpness” and “Wavyness” you can get a bunch of different looks:

For the third one I also added a Y-axis scan line that combines with the Z one:

(I used worldposition but screenposition could be used too)

Of course these pixels aren’t really centering within the correct part of each font letter, if you want to solve that problem you most likely need to create a new font which gets a bit out of my expertise. Should be possible to get pretty close though with tweaking and maybe blurring the font a bit to use more of the combined shader created shapes.

I am bowled over… I am a complete newbie to UE, but i wont be by this time next week… Thank you kindly for this advice.

Is there a way to use these distance field fonts methods in UMG yet? It’s quite important for 3d widgets, because when UMG renders text in 3d it’s really bad.