Can each element in a static mesh have its own lightmap?

I am importing a fbx file with multiple elements, each with its own lightmap.

My problem is that all the lightmaps appear on the uv channel 0 together, resulting in a somewhat messy shadow map (the “light map coordinate index” is set to 0 because for each element i use the same map for texture and light). 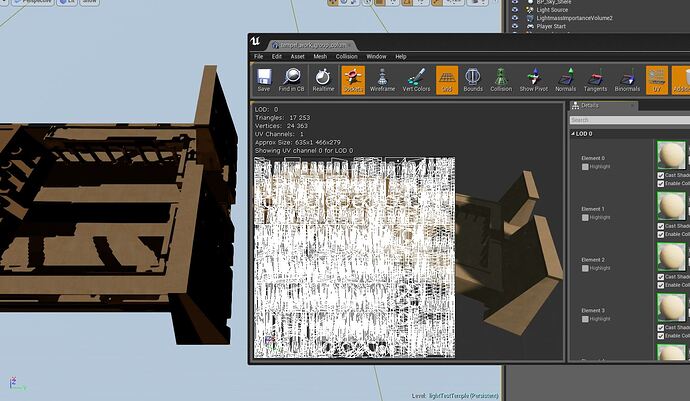 So each element seems to have its own uv map for texture (which is correct, all my elements are textured correctly), but they all seem to share the same large messy lightmap (superposition of every individual lightmaps).

Is there a way to assign a different lightmap to each element or should i build (some way or another) a global lightmap for all my static mesh and assign it to uv channel 1 ?

Unfortunately no, you need to import the elements as different meshes, or lay out their lightmap UVs so they do not overlap. Note that packing lots of meshes together like this means you will have to use a higher lightmap resolution, which will make build times longer (the largest lightmap resolution usually dominates the build time, the same mesh split into smaller pieces builds faster).

Pity, maybe for a future release ?

Anyway, thanks for the answer and the info !