HI there,
i am having an issue creating uvs for lightmaps in blender the problem is there is no way that we can change uv map grid size in blender so that we can snap the vertices to grid points . i tried to make one customize picture of grid in photoshop and used that for snaping the vertices in blender but it didnt help i will be providing files to you guys so you can check what i am doing wrong i wish i could change the grid size of uv map in blender to match that of in unreal as like the others do in 3ds max or maya . My aim is to get clean light map shadows so that i can go for Global illumination in unreal . Here are the results 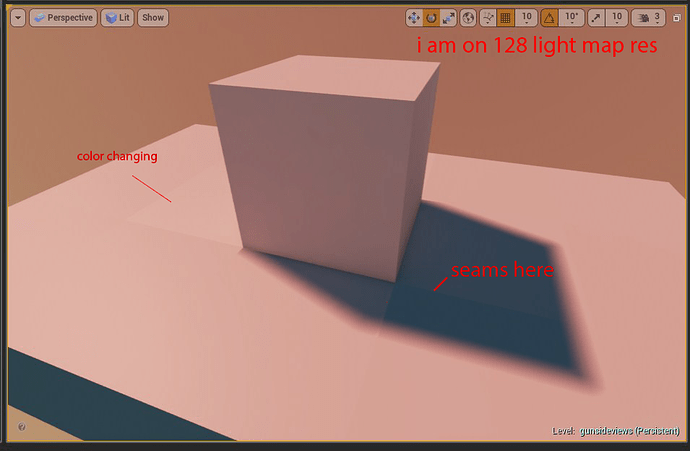 here is the link from which you can download the blender file and ofcourse the other two format file obj , fbx

That’s not an issue with the lightmap UV’s (though you could improve them by attaching as many faces in the UV’s as possible)
It’s the lighting system which causes variations between meshes, since your mesh is so simple there’s no advantage to building a surface that way, to get better results make it one surface which will also improve performance because it reduces the number of objects.

I get seams between my non-flat, higher-poly-than-example modular model with normal maps too. I get less issues with seams when using higher resolution lightmaps and high quality lighting. Still, I was unable to eliminate seams completely

It doesn’t have anything to do with the complexity, it’s that the meshes are separate actors and get processed with lighting individually. For low-poly meshes, the issue is that each object increases draw calls, which lowers performance and you aren’t getting any benefit from it, because a unique mesh will be a single draw call and would use less geometry anyway. The only issue doing it that way is that if you have a very large surface it might need a very large lightmap to get enough detail, think something like a mall or a stadium. Normally you’d want to split it up to get more lightmap detail but then you would get the lighting variations