APK is signed with Signature Scheme V2, which is not yet supported. Please disable signing with Sche 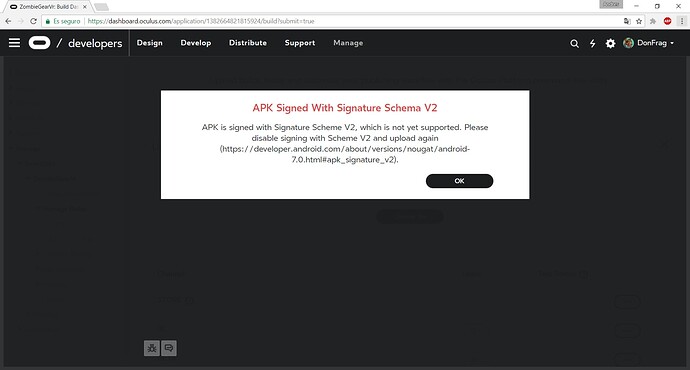 how can i fix that?

BTW i am using gradle.
when i switch to ant there is a build error because occulus lib is not included on gameactivity.java

Best to ask them in their forum I guess? : https://forums.oculus.com/developer/categories/unreal

I am able to build with ant without any problems. What version are you using? I’m on: /NVPACK/apache-ant-1.8.2

PS: Are you using 3D widgets in your project? Do you notice this big problem in 4.17: [GearVR] 3D widget performance degregation in 4.17 - XR Development - Unreal Engine Forums
??

Yes i am using 3d widgets and same ant version

In gradle you have to set Signature Scheme V2=false.
Now the question is how to do it with ue4

How does one switch between Ant and Gradle in 4.17 ?

You could also add this in UEDeployAndroid.cs:

This would make it so GearVR enabled apps for distribution disable the new signing.

Note: it may also be necessary to add “v1SigningEnabled true”, but I’m not 100% certain.

we are going to test it asap!
thanks

now i am getting this

FAILURE: Build failed with an exception.

when i build with ant shos this error too

I can’t reproduce it; I tried a Gear VR for distribution build and it compiled fine with both Ant and Gradle. Maybe try clearing the Intermediate/Android/APK and packaging again.

the error is because this
https://answers.unrealengine.com/questions/489703/android-gear-vr-shipping-distribution-package-fail.html

with the github hotfix+ the gameactivity error fix now i can upload the apk to oculus store.
thanks

the error is because this
https://answers.unrealengine.com/questions/489703/android-gear-vr-shipping-distribution-package-fail.html

well in 4.17 there is no GearVR_APL.xml son what i did was remove the file from the Intermediate folder and then force the rebuilds with the method of [MENTION=11153]Chris Babcock[/MENTION]

I’m checking the Oculus, but I believe at some point they removed the call and forgot to update the GearVR_APL.xml file.

BTW
APK Already Exists An APK with this package name and version code already exists. Please increment the version code and then resubmit your update.

If you run “aapt.exe d badging my.apk” it will show the version code; but you can also check the AndroidManifest.xml. I’ve checked and it does get set properly. Is your DefaultEngine.ini maybe read-only?

The only other way I see for the store version to be wrong is if you turned on bUseChangeListAsStoreVersion in the ini and have environment variable IsBuildMachine=1.

it shows version 3 but when i upload to oculus store it says version1 name 1. weird