Didn’t make any difference for me.

I have the same problem, is there any news about this yet? 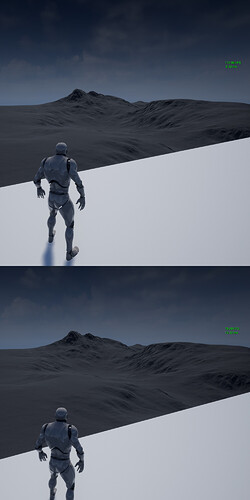 But it seems to have something to do with the shadows and DX11. With DX12 I have micro stutters without load.

I think this problem has been going on for quite some time.

Epic could explain what’s happening here, even if there is no solution, but to make us understand.

Yes, it would be nice…

At least what you could do now to get this problem reasonably under control.

No matter what you set or do, big jumps in fps don’t happen.

Fps keep going down the tubes.

What do you mean “even if there is no solution”? There is always a solution.
These UE4 problems especially with the shadows performance are ridiculous. Cryengine has a way better dynamic lighting, SVOGI, and shadows performance impact is minimal.
And now with the 4.26 version is even worse.

Or course! I meant something that they would consider a non feasible solution (because of priority, lazyness, or whatever excuse they would want to give us. But at least, and official excuse).

I already submitted it as a bug lot of time ago, with no response. Probably, the most of us reporting it, the most visible/prioritary this issue will be:
https://epicsupport.force.com/unrealengine/s/

Hi, yes it will disable all tranclucency… but this reveals that 4.26 is rendering some translucent materials even if none are present in a scene. That’s why some scenes run much worse in 4.26.

In 4.25 it seems to automatically understand that there are no translucent objects and not waste precious ms on rendering that pass.

This could be the problem, translucency. Have you tried to test a map without any translucent materials, on and off?

I have found that SSAO hits hard, might be part of it?

Also, while it’s not this patch, I’d like to mention that updating instances is much more expensive in 4.25. Not sure if that’s the exact version, or if it’s one of the hotfixes, but I believe it’s 4.25.

Was wondering if anyone tried their projects in UE5 , and if there any performance changes there?

Can’t be a good thing. What the heck are they doing to the engine ?

It’s not.
From what the updates have shown us repeatedly over time, the epic team just don’t care about performance, or their user base, or the bug report form one bit.

They have direct access to get the latest RTX on the market, while normal people can’t get one even at a 400% markup. So, for them, performance isn’t an issue.
The rest of the world stuck on a 1080ti or similar (because the rtx cards all blow anyway until the 30x series which you can barely purchase) is just SOoL.

That said, I personally still have to check .27 preview for any changes.

Considering that this proven fps drop was never actually acknowledged by the epic Team at all short of 1 *what I wasn’t aware of this* message from staff, and that UE5 with out lumen performs a lot more poorly, I seriously don’t expect to see the FPS rise again…

/ after testing, I’m taking all my projects off to cryengine…

Yea i get the feeling they are following like all the other dev’s and gamemaker studios , " just make it look better " . Photorealistic. To me it seems it makes more sense to have performance balanced in . Then more people with lower end specs can play the games. Thus more sales. Especially now with such difficulty getting better GPU’s.

Can these projects be ported to Cryengine?

Has anyone tried 4.27 preview 1? Any difference?

Yes and it hasn’t solved the issue

What results you getting? Can you share GPU stat and GPU profile from both versions?
Is it same bad?

Ok, it appears that my test scene is running about 10fps faster in .27 preview.
It’s still not hitting the 120FPS that it hits in .25, but I’m thinking maybe the window size is different, and I really don’t want to waste time on checking on that right now.

Overall, I think this version is running smoother rendering wise.