Hi folks. I’ve been hearing about KiteAndLightning’s plugin coming soon, but have heard no official word from Epic on the matter (It’s in their hands now). I got tired of waiting, so I built my own using captureCubes, BPs, Materials, and Matinee. No plugins required, but there is a pretty serious limitation. 2k x 2k per eye. This is a hard limit on how high a captureCubeTarget can be set. Even with this limitation, the resulting sideBySide 4k x 2k panos are still pretty nice, so I’m totally willing to share the solution until a better one comes along. Here’s an image to show what it can spit out.

There are some improvements to make, and a few bits I need to clean up, but the method is working. This image is a sideBySide stereoPano. There are some minor seam artifacts that can be improved upon, but this serves as a base method for correct stereo on the 4 main axis. Zenith and Nadir can be problematic, but I’ve been negating stereo on them in finals anyway.

Many thanks to RyanB for making this possible, the math of which can be found in this thread.

I understand completely that captureCubeTargets were never meant to be used this way, but I would ask that their resolution limit be unlocked, so that exporting higher resolutions could be done. It would be very useful! (OK, now that I’ve unlocked the higher res renderTargets, I see why you left them at 2k;) It’s not for the feint of heart. It’s very, very slow, and eats ram for breakfast. It can also crash your video drivers due, I suppose to hogging up video ram. Buuuut, with care, you can get it to work.

UPDATE: Got 8k animated stereoPano export working. Here’s a vid.
Note, YouTube has not at this time enabled stereo360 vids. So in an effort to showcase the working stereo aspect, I left it as a normal video but with red/blue stereo enabled. As soon as YouTube gets that switch flipped, I’ll update the video for cardboard and gearvr. 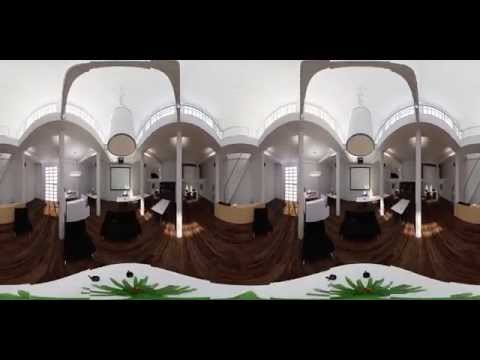 Second Version Released! Have a go!

*** Note: Bringing the panoCam into your scene will slow it down. By default (to avoid bogging down systems too much) the 4 capture cubes (Front, Right, Back and Left) are set to 512. When it comes time to export your 360, set them each back up to 2048 for best quality.

Did you though about not 4, but more cameras? In theory you can get less terrible sews…

My assumption at the start of this, was that I would have to go with more than 4 angles. However, I decided to start with 4 and see what the issues were, since it was still theoretically very effective. I prefer as few stitching seams as possible. If I go to 8 or more, then there are stitches everywhere. While they become less apparent, they are still there, and there’s more of them. I’m also avoiding some stitching issues by rendering the full 360 distorted view for each of 4 angles. They tend to blend pretty nicely, but yeah, seams are still an issue. In my tests so far, the seams aren’t that bad though. I wouldn’t call them “terrible.”

Performance is also an issue. This isn’t a 30fps sort of thing. fps will slow down to something like 3fps with this in your scene, so rendering even more views could make it very unwieldy. I’ll probably create a quality control to improve performance while mucking about with your scene, then at rendertime, set it back up to full res. I’ll also experiment with 8 views, since there is some possible optimization headroom. In the meantime, I figured some folks might find this useful.

BTW, that obvious “seam” down the middle is not actually a problem. That’s the division between the L and R view and not a stitching seam. When viewed in stereo, that simply doesn’t exist.

First off, great tutorial and thanks for sharing the pano cam! So I have a silly noobish question- how do I put these rendered 360 pano images to to proper use after following all the steps in the video tutorial? I tried loading them into a software like kolor eyes 3d, and even following youtube’s 360 video setup, but the panoramic image is distorted. Do these only work in stereoscopic mode or can I set them up to work like the 360 videos on youtube (but with a single frame for example).

This currewntly exports a stereo-only side-by-side image. Only apps that are set up to support that format will work with this currently. Apps that I know work are:
whirlygig (DK2) and the GearVR image viewing app. I haven’t tested KolorEyes, but this page:
kolor | GoProOculus_Rift#2D.26_3D
At the bottom, says you can set to top/bottom or sideBySide stereo. Select SideBySide and it should work. I can try to test it soon.

You could always crop one of the eyes (halves) of the image and view as mono… but the resolution wouldn’t be great.

I’m adding some features. One of them is Mono output (already in my beta) and another is previewing the stereo, with control over the zPlane depth, and IPD while viewing the stereo in a DK2. This feature is in progress.

I just had a glance at the desktop version of KolorEyes documentation a bit more, and it seems it relies on “Extended Mode” Which is basically history now with Oculus. While it is still supported for a few more weeks until 7 is out, it’s a hack that I won’t spend time testing. Extended Mode must die;)

Thanks for the response! I’ll check out whirlygig and also try it on the GearVR when I get a chance.

I agree with the extended mode. Can’t wait for the .7 update!

Monoscopic is working for me, but I’m struggling with the stereoscopic workflow

Hi 3dlight! Thank you for sharing the Pano cam. The only think is that I have a problem

when I export/render (even with a very small resolution: 640x480), at the beginning the first frame, how do you said, is incorrect but after a couple of minutes its very slow and it stops (like crushing) and begins again to render wrong. What I have to do? I’ve done everything step by step following your video tutorial. Can the issue regard the version? I have the 4.9. Thank your in advance!!

Hi 3d light,
Great Blueprint, I’m still struggling with the upload to youtube as a 360 video. Have you experimented with that and got some pointers?

I haven’t tried yet. Going to attempt today, and I’ll let you know.

Note: I have updated this to support 4.10, and added Top/Bottom and Mono export in addition to the SideBySide in the original. See the second post for the new link.

After some trial and error, I got it to work. Here’s the method I used to get YouTube Stereo 360 to work:

I tried with SideBySide, but had no luck, thus I added TopBot support.

Thanks, will give it a try

Hi Andrew, thanks for this great tool!

I wanted to give you my feedback after spending 2 days on it.

Everything works fine if I don’t animate the pano camera.

I just added a straight path to the camera in Matinee.

It starts to render correctly but then after a couple of frames, either it stops or crashes randomly.

Is there any chance you could improve that?

Do you by any chance have an hmd, like the dk2 on while you are exporting? I’ve found that it needs to be turned off to be stable.