This is my attempt at recreating a similar Zero-G VR locomotion system to the one found in the Lone Echo/Echo VR games.

It allows you to grab onto walls, and push yourself off as if you were floating in 0g. There are also thrusters on your hands that activate with the B/Y buttons, and boost/air-brakes on the thumbstick clicks. The button layout is the same as the Echo VR games. I also included the object-grabbing/throwing ability from the original VR template. 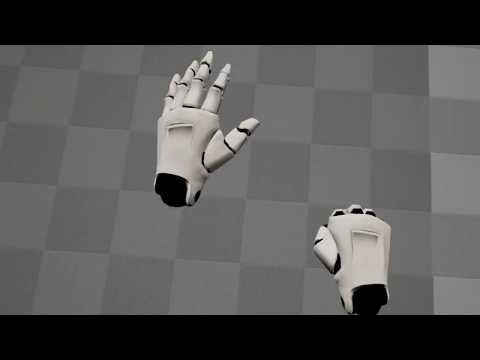 UPDATED 1/23/19:
Finally got a head-bounce working, when the player bumps into a wall, they now gently bounce off it, in a somewhat realistic way, similar to EA.
Disabled the smooth-turning I was using before, switched to a basic 45’ snap/comfort turning mode, since a couple people asked.
Also added the same boost/air-brake functionality from EA, although my speed settings for those are a little different than EA’s.
Oh, and I updated/loaded up the project into UE4.21.2 and everything seems to function great!

Earlier this year I tried the Mission ISS vr demo, and almost immediately I started working to recreate that VR movement method in my own UE4 projects.
A little later, Echo Arena (and Lone Echo) came out, and the Zero-G movement they did for that felt even better, so over the summer I tried to match what Echo Arena’s movement mechanics felt like… The hardest part for me was getting the physics/math of the hand-thrusters and their speed-limits working properly. But now I think I’ve got it pretty darn close enough!

Anyway, I like this movement mechanic a lot, and I’d love to see more VR projects/games using this kind of VR locomotion… So I figured I’d share what I’ve learned/created! ;D

I’m not that good at making templates, so forgive me if it’s a little sloppy… I’ve tried to make it as straight forward and simple as possible, but feel free to ask me questions if something is confusing. Basically, I started with the VR hands/teleporting template that comes with UE4, then I stripped out everything I didn’t need, and modified the MotionControllerPawn to simulate 0g physics. The rest of the work is done by my Blueprint scripts, which I just added in with the existing MotionControllerPawn’s BP.

You can download the OLD project files here:
https://drive.google.com/open?id=0B8…W80bnVTTm9XUGs
(this old link may stop working if I need the gdrive space)

Or if you just want the important Blueprint parts, that go into your pawn, I put it up here:
Zero-G VR Pawn by Nik posted by NikoKun | blueprintUE | PasteBin For Unreal Engine 4
(This is also outdated, might update it later if people need it.)

If you make something with this, just gimme credit for it somewhere, and if you don’t mind I’d love to know about it! I hope someone finds this useful! Let me know if you need help, I’ll try to respond, tho it may take time sometimes.