Yet another FPS blueprint tutorial

I have slowly been working on putting together a step by step (for the most part), from scratch, FPS via blueprints tutorial. I have been documenting at my blog in my signature, but finally had time to sit down and add it to the unreal wiki. Currently it is in the process of setting up your menus and networking stuff, more to come, will update in this thread when new sections are adde

It is already getting long, so will probably end up slicing up future sections into ‘part 2’, ‘part3’ etc.

Just figured there were always LOADS of questions on some of the basic things, so I would document it as I went through the process.

just had a quick look and i must say so far looks really good, i’m going to try a follow it and see where we get to, just to learn about menus is a big job so if i get stuck i’ll shout

Sounds good. Just started on the “Join Game” section. Have a few things to do outside the house today, but I hope to wrap that part up by the end of the weekend.

that looks good i’ll hit it up tomorrow

Thank you for this!

You are absolutely correct that there is not a single tutorial that covers everything that links all the random assortment of knowledge together. While some may argue that this information is already available… most of the info is scattered across the web/wiki and it is up to people to fill in the gaps and try to piece it all together. Thank you VERY much for putting the time into doing this. I will be watching this series closing and spreading the good word about it!

Well, it’s just at the start, so a LONG way to go, but I plan to finish it out and hopefully it will be useful to some. I am currently stuck because there is no real ‘online’ if you are using the Null online subsystem, and thus no place to pick up what servers are out there. So I am adding steam support, but having problems with it opening the port. Once I get that squared away I should be able to continue on. In the meantime I am fiddling with stuff so I should have quite a bit to add when the Steam stuff is worked out.

Geodav, I looked at the tutorial, all that actually comes later… but let me know how it goes.

Howdy!
I’m a newbie with BP and wanted to mention where I get stuck. Maybe it can help make the tutorial better.

I wound up getting stuck at the ‘Start_Game’ custom event creation. I’ve used custom events before, but the tutorial switched abruptly from widgets to this and it wasn’t clear to me which BP the Start_Game should be in at first. I wound up recognizing the macros that we made from the pictures and I know those aren’t globally available so I knew then which bp it was in. Just wanted to post here in case another newbie gets a little lost like myself.

I also got confused with the Event Init part. You showed the same exec chain on the Start_Game on your blog as you did on your Event Init on the tutorial, and you mentioned “Lets get back to the Event Init thing” even though it wasn’t mentioned yet. Do we need both an Event Init and a Start_Game or was it just an event change I didn’t catch?

Also just noticed that with the Leave_Current_State Macro it’s very easy to get bytes mistaken with enumerators for the desired state input.
I had mistakenly used byte again at first as it wasn’t mentioned that should be our state enum.

Thanks for this tutorial btw, I’ll be sure to follow its development. It’s a fun side project from my normal 3D arch-vis.

You are not the first, this evening when I am home I will go through that section again and try to make it a bit more clear. Thanks for the input.

Yeah, I went back to that, and looked, and looked in my project. I can’t even find where there is an Event_Init like that… I think that is a bit of confusion I put out there. I changed the Tutorial.

Where did you add that stuff to an Event_Init? I don’t think it should be there. The Menus level/map has the code that calls Start_Game so you shouldn’t need that other stuff anywhere.

Sorry. Too much time doing this late at night.

looks great but most images are too small to read

Not all were too small to read but some were.
(and I did click on them first)

Not all were too small to read but some were.
(and I did click on them first)

Ah, thought I had them all big enough… if you find any too small link to them for me and I’ll try to do something better to replace them. I always hated example BP’s when it was too small to read.

I just wanted to say thanks again, because of your tut so far I was able to really get into it and I’ve been learning a lot now. I kinda went awol off the tut after learning UI because it’s fun and I even figured out how to save user config settings in a blueprint extension of the savegame class, though I may change it to a struct soon.

I wanted to post a cool snippet of my menu stuff here! I’m working on building modular environment pieces at the same time and wound up making a silly shack to test things in. Also for my background I wound up using a render to texture 2D camera. That was pretty cool to do. 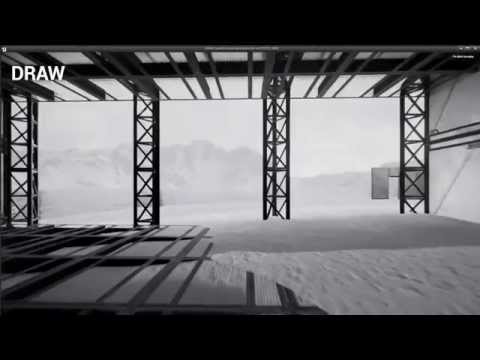 Nice work. Far beyond where I have gone with the tutorial. Work is killing me so I haven’t had much free time, need to get back on it.

Did you learn the saving and settings stuff or are you using a plugin?

Do you plan on writing about using a gamepad to navigate those menus? There really isn’t a lot of discussion about this especially if your wanting to do more than just move up and down a menu column. Thanks again for all your hard work!

At this point no, as I don’t own/use one. But who knows, maybe I’ll get there eventually. I just got some stuff working in my limited time so I just need to get back in and continue on.

Make sure that in your game instance you have a variable ‘Error_MSG’ that is set as type ‘Error MSG’ … which is reference to that BP Widget. When you drag off that (light blue) you should be able to type in ‘set error’ and find that node in the list. Let me know if that is it.