So I’ve been able to sort of get the effect I want… having a texture able to be positioned in UVs according to worldspace x,y,z… but there is a slight problem with it.

It sort of blends together.

The texture is a simple perfect tiling texture. Vertical tiling is perfect… but I want tiling along all three axes to be perfect. Is this possible at all?

Here is my current material 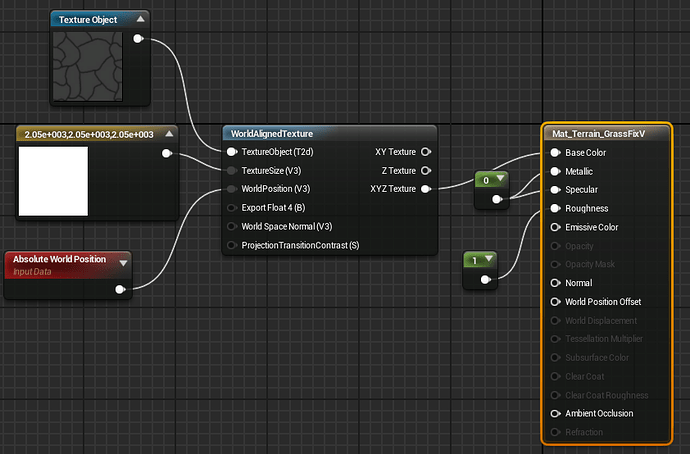 Check your UVs around that part. Bad UVs was the cause of any of my world alligned texture-related problems. Maybe post a picture of them?

UV’s don’t play a role in this type of mapping so they won’t be the issue. In fact, this is just exactly how the World-Aligned Texture node works. It literally maps textures based on the direction (in World-Space) a face is facing, divides that by some number to get the scale and maps it to the object. It then blends between those three textures based on how parallel to that axis the face is.

What you can do in this case is either avoid using world-projected UV’s and UV the object to be seamless, or you can try and mess with the input to ‘ProjectionTransitionContrast’ on that blue node there, which will sharpen or soften the blend. I think the default value. However, I don’t think you’ll ever actually get it seamless without just doing it the old-school UV-mapping way.