Dan and I have been working on building a really quick and simple zombie shooter game. You’re a wizard who can cast fireballs. It is midnight and restless zombies are emerging from the graves to eat your brains. You have to survive until morning!

This is all really just a flimsy pretext to use virtual reality (Oculus Rift) and Leap Motion to throw fireballs at something interesting. We’re trying to figure out the best way to “throw” things using leap motion before we dive in and implement it for our primary game.

This is the standard mouse and keyboard with typical monitor setup 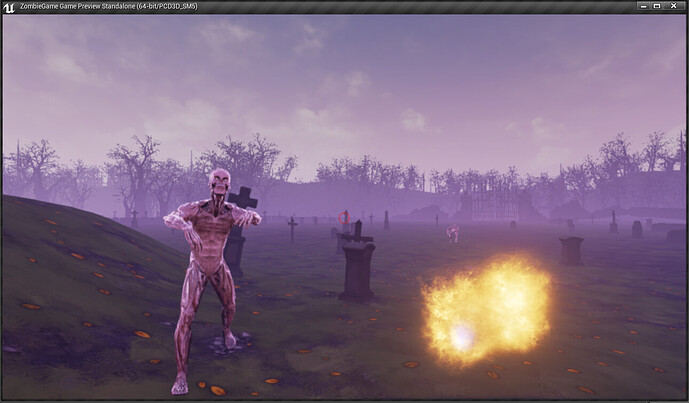 This is an early version of the game with the leap motion hand. The hand is open because it displays better than a blob of circles. 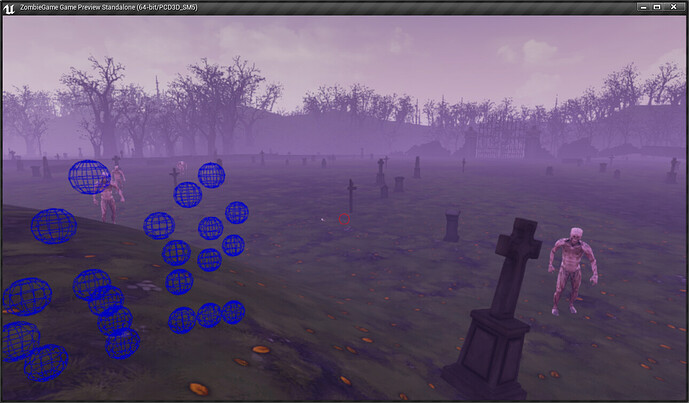 This is the VR view of the game with leap motion. 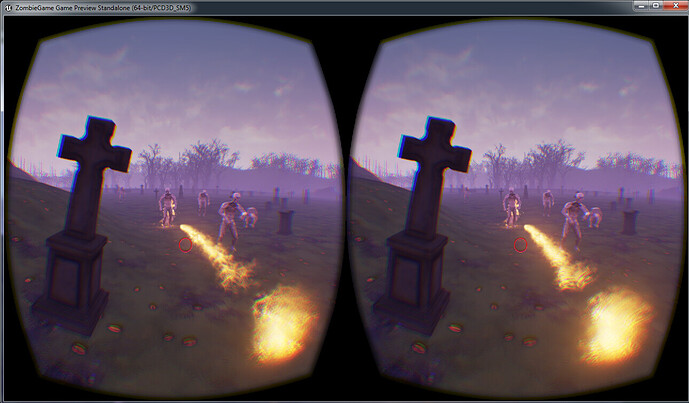 We’ll be releasing it in a few weeks.

Ill be keeping an eye on this, reminds me of an arcade shooter.

Hmm, we’re still working on this. Getting a lot closer to release.

I got the AI to work really well with the behavior trees; Fireballs charge up the longer you hold them; Got zombies to explode into flaming gibs when they get hit by a super charged fireball; Our custom wizard character skelmesh now follows your hand gestures; The main menu UI is still a WIP; 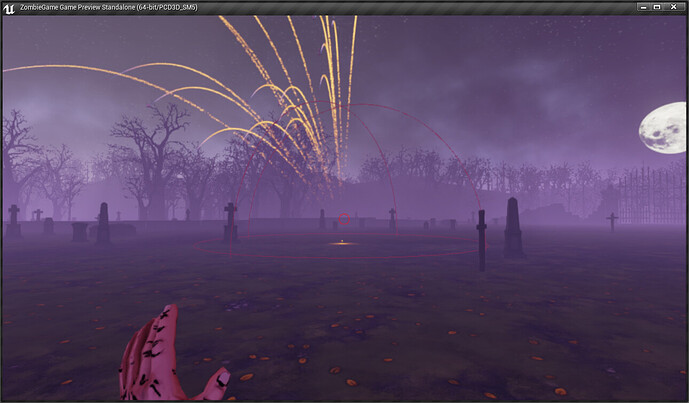 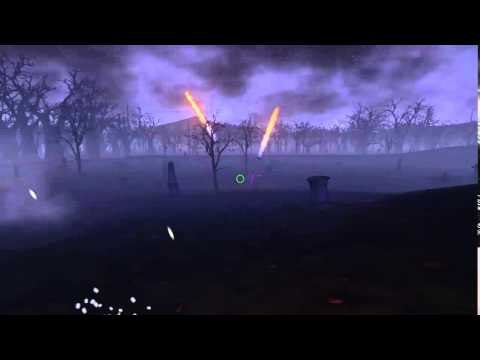 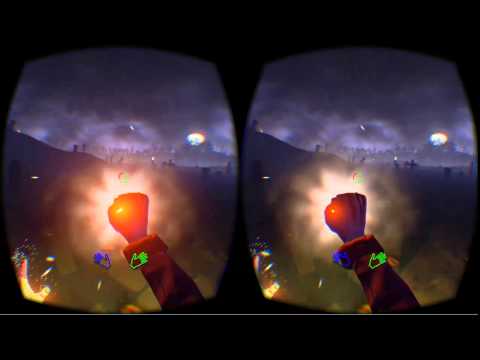 NICE!!! I like the premise too. Keep the vids rolling in.

Do you have title?

Hmm, interesting title. I like the direction it’s going. I was thinking I’d try to name the game after some narrative element. Here’s the gameplay and narrative description I’ve got:

The screen fades in from black. You wake up in your bed. You get up and look around your messy magical chamber. There are glowing potion bottles, herbs, books, what looks like either spilled red wine or blood, and a hastily scrabbled note you wrote to yourself. If you look into the mirror, you can see yourself staring back at you. When you move your hands, the mirror image does as well. When you look left and right, so does it. You can wander around the room and change game settings here. When you’re ready, you can travel downstairs to the bottom floor of the magical tower and get a sense for the atmospherics and tone. If you look outside, you see that it is a bright sunny day. The birds are happily chirping their songs to each other, you hear faint melodic music in the background, warm beams of sunshine illuminate your room, and lush green trees wave softly in the summer breeze. In the center of the chamber, you find a six foot book of magic incantations which look dark and ominous. If you look around the room, you see portraits of yourself and a beautiful woman at your side, who can only be your lovely wife. You can look around and you’ll find a hand written note from her wishing her love to you, despite her illness. There is a big, heavy wooden door which has been barred from the inside and it currently can’t be opened. On the other side of the chamber is a dank tunnel which descends into inky darkness, and you see faint glimmers of purplish light reflecting off the glistening walls.

At this point, you venture down into the tunnels and find a large hollowed out chamber. At the center, you find a beautiful woman, who can only be your wife, suspended in stasis by magic. Her body is surrounded by black candles and a massive pentagram chalked into the earth. A single ray of sunlight beams down on her. On the opposite end of the chamber, you see a large pedastle with an old book and what looks to be the incantation spell for some very dark and evil magic. All that remains of the incantation is to place your hands on the spellbook. At this point, the player uses their leap hands to place them on the spell book, and suddenly magical sparks begin to crackle. The hands begin to glow with an angry blackish purple and the air crackles with energy. Before you can do anything more, the whole chamber explodes. Your wife begins to stir, and with her, so does the sky. What was just a beautiful day has turned into darkness, with angry swirling storm clouds raining down lightning. Your wife wails in despair and with unearthly power, bolts from the chamber, runs up the dark tunnel, smashes through the front door, and runs far out into the night.

You follow her. The day has turned to the blackest night. The forest has turned wicked, ominous red eyes peer at you from the mists, and black crows caw at you from the withered branches. You see the glowing outline of your wife in the distance and go after her. Soon, you realize that she wasn’t brought back to life, but brought back to undeath. What a horrible fate! You must put her spirit to rest by throwing fireballs at her. As you do, her body is cleansed by the fire and her spirit essence is released. As you gather it up, a large metal grated gate slowly begins to creak open. Then you hear it… soft moans and growls emerging from the graves within the graveyard. An arm bursts from the earth, and out comes an undead corpse! It sees you and immediately begins clawing its way towards you. You do what you know to do, and throw a fireball at it. Another spirit essence!

You soon realize that the spell of resurrection you casted didn’t just return your wife from the dead, but every single corpse in the graveyard! And they all want to devour your living flesh. You throw fireball after fireball, trying to return the dead from whenst they came, but it’s too much. You’ve been collecting their spirit essences though, so you take them to the shrine of purification in the center of the graveyard. As soon as you place your hands on the runes, the spirits flow into the shrine and a single, massive burst of light shoots high up into the sky. Oddly, the sky relents a bit and the lightning ceases. A new spell rune presents itself to you! Now you’re not just limited to piddly fireballs, but you’ve got … some other spell I haven’t come up with yet but will be awesome!

This awakens more undead from the graves, and they’re stronger and faster!

You put them all to rest and continue powering up the shrine and getting more spells.

Finally, a super massive beast roars off in the distance and crashes through the trees. It smashes down the iron gates as if it were paper. He’s HUNGRY. He doesn’t care who or what he eats, so he finds the nearest zombie, grabs him in his huge fist, and bites his head off and throws the remains away. If he runs out of zombies to eat, he’ll turn his hungry gaze upon you. He’s as big as a house and very, very scary! Somehow, you know that you have to defeat this brute before peace can be restored…

Intriguing. I like the action. Perhaps a text-based narrative in the grave stones, click/touch the tombstones and pages of the story unfold. I like Giant Zombie Eating Ghoul at the end… tops it off!

becouse i can :rolleyes:

Can’t please everyone… I’m okay with that. The zombies have mostly just been cannon fodder for playing with gesture based spells and to give a small sense of urgency.

I’m still trying to figure out a natural way to move around the world without having to move your hands to the mouse and keyboard. I’d like to be able to move your character using just your hands, but I’m a bit creatively stuck on the best way to give players control over their movement while also letting them look around and cast spells at the same time. Here are some ideas I’ve been thinking of:

change the color to white and make them white walkers lol

We’ve been busy. We’ve added a bunch of additional spells, wrote out a sweet narrative, created different ways to interact with different spells by using your hands, and made spells combo with each other (ie, fireball + tar = fire wall)

I know the video isn’t very good, but here is a quick tech demo of our “Cone of Cold” spell and our “Fireball” spell. We came up with a way to do spell switching without having to move your hands back to your controller. Just look down, look at the spell element orb, then look back up. Tada! 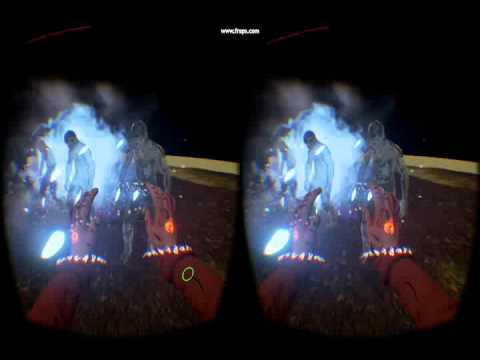 Some narrative placeholder content for my interactive objects system. Here, I’ve got a parchment which contains text. By interacting with the parchment, it comes up into a comfortable reading range for VR and it self-illuminates, making reading easier in dark environments.

One thing which was interesting is playing with the font size, content length, and parchment distance from the eyes within VR to maximize comfort and readability. 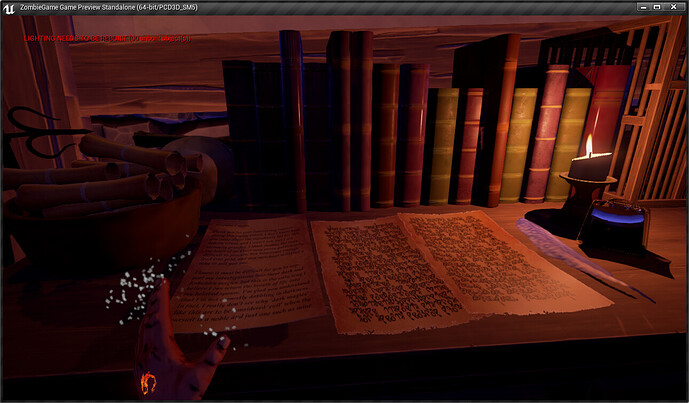 I have an Oculus Rift and would love to test your demo when it’s ready. 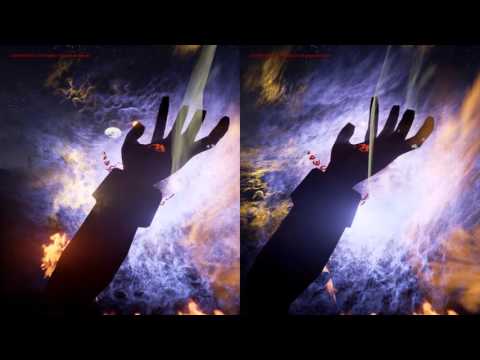 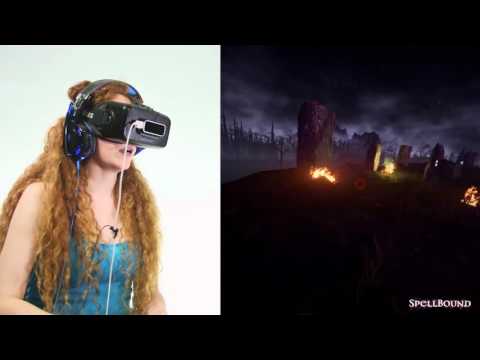 Our Steam Greenlight campaign has started this afternoon! Check it out here:
http://steamcommunity.com/sharedfiles/filedetails/?id=544257947

Looking back at my first post, it’s been quite a remarkable journey so far

i hope i buy Oculus Rift and leap some day, your game looks cool
voted for you BTW