This is a little side project I’ve had lying around, gathering dust. When I first started to use Unreal Engine 4, I did this small project to teach myself Blueprint and to generally get familiar with the editor. It’s not a fully fleshed out game yet, but the basics are in there. It’s playable.

Since I’ve been taking a break from working on Ninja Arcade for a bit, I’ve spent some more time on this project, basically to get it to a point where I can have other people play it without too much trouble, considering being basically like a pre-alpha version. I’ve had some friends try it out, but I actually just wanted to post it publicly. At this stage, I don’t really know how far I’ll take this game, making more content and more complex game play structure and all that, but I thought it would be fun for people to kinda shoot some stuff… you know… old school…

So, the idea is pretty simple, it’s loosely based on old arcade shooter games. The menu at this stage is really “wip” and really just functions for basic needs. Currently the resolution settings and full screen toggle is slightly buggy, but it does work. Best is to select the res first, then toggle full screen, if you want full screen. Restarting the game will remember your settings. 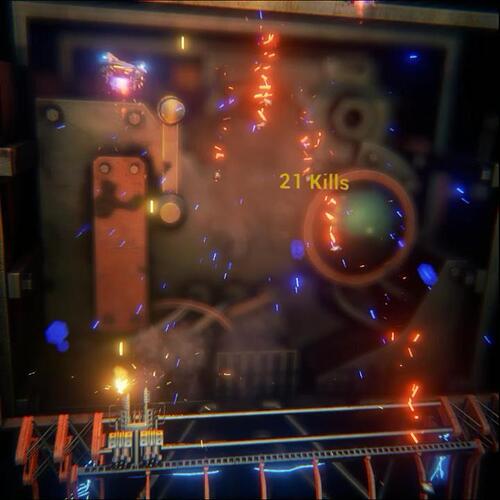 Thanks for posting a playable demo!

I gave it a shot and you’ve got a really great start! I love the start menu with the camera movement following the mouse! 3D menus are a favorite of mine.

For the controls, having control via the wsad for the left and right would feel more natural to me rather than the directional keys.

The game play is in a great starting point and again I love the camera shift as I move the ship along the rail.

The player movement along the rail seemed a little sluggish. Maybe speed it up just a bit when multiple enemies start showing up. I started to struggle during this phase once I got 15 kills.

Great work overall and I’ll keep an eye on what you get going!

Thanks for the feedback!. This is why I posted this…

That “sluggishness” was one of those things I wanna not make it really easy, but also not irritate the player. There’s a balance there I tried to reach with it. I’ve really gotten used to it, as it happens when you work on something…

so it’s good you mention it specifically.

I obviously don’t have any upgrades or anything like that in there at this stage. The response can probably upgrade by power up as well. Like adding more gears to the motor, doubling your response and maybe a certain percentage more speed. Or something like that. So it would be visually in there. More gears = more power… haha.

Of course weapon upgrades is a no brainer. But all that, is all secondary at this point. I have the game play in my head, and it includes all this stuff. But I think the movement response and speed up is a good idea, did not think to do that specifically during game play. But I think doing during game play is the way to go. Always good to get more power as you play…

The one thing that I did want to do that would also have impact on how difficult it is, is to have some sort of mechanism on the sides so you can punch the UFO back in the air. Probably also through an upgrade. So if you can’t make it in time and they end up next to you, you can punch them back up. Since you can move in underneath them and keep them from destroying you, having some control of that from the sides could be cool… in theory. It’s one of those things that may or may not work. So just as kind of a secondary type of thing you can do, besides shoot.

I’ll keep the controls in mind as well. Obviously the way to go is customization. As soon as I have a way to accomplish that, it would be the end of controls concerns…

I can probably default 2 systems anyway, regardless of customization.

No problem with the feedback!

Good constructive criticism is definitely key! As you pointed out it’s easy to white wash some things and not notice because you see it constantly. The sluggishness was okay until more enemies started spawning on screen then it was too slow to keep up.

It wouldn’t need to be a power up per se but possibly having the speed increase incrementally based on how many ships are on screen. Even a slightly more responsive movement would at least make me feel like I had a fighting chance.

I did use the tactic of bumping them when they got close to not keep them from destroying me, but by the time I was at that point there was another to my right I would never have stopped.

Something to consider, instead of one being an instant kill make there be incremental damage like maybe 3 hits and your dead. You can set up a particle effects or smoke to show damage like you do with the enemy ships. Then power ups such as health and whatnot come in to play for restoring damage and all that.

Great start thus far and I definitely look forward to any other builds you get up!

What are we supposed to do against the massive army coming in at ~33 kills?

Great work with this project so far! Was not expecting that camera shift while playing the demo for your project. I was caught off guard in a pleasant way. I was thinking maybe there could be some sort of power-up or more ‘damage inflicting’ ammo that could drop from random enemies. It got pretty crazy after 20. Keep up the great work and be sure to keep us updated as you progress along with this project,

But seriously, it’s currently just a ramp up until you can’t take it anymore so the game can end. I don’t have any real mechanics in yet for dealing with end of level… etc. No timing or anything like that.

I have 2 ideas for it which both is time based. The one idea is that you run out the time trying to get as many kills as possible and the other idea is kill count limit with time limit and the score is influenced by time left when you reach the kill count, or if you don’t reach the kill count. So there can be a scoring system not just pure kill count.

Also things like hit accuracy can influence score, weapon upgrade… etc. I’m still not sure if I want to drop upgrades from special kills, or by rewarding good shooting, hit accuracy based. There’s loads to think about and loads I have thought bout, but this really is just the real early stage of this game. It’s not my main focus. I just wanted to get some public reaction to the game to judge how I will proceed.

@Tim - Yeah, the player right now just dies. It was one of those things. There are just loads of stuff not implemented. I also only gave 2 lives and there’s nothing you can do about it. It’s really the absolute basic game play at this stage.

The speed thing, yeah, it can easily work as a “blind” gradual upgrade. I personally like visuals to go along with it and that can also be worked in there.

Thanks for you interest so far. It certainly helps at this early stage to get some feedback on the basic mechanics.

Yeah, the camera thing was my little experiment with blueprint. Was one of the first things I did to see if I could do it. Worked out pretty well…

For upgrades, etc… sure… all that is planned just not implemented. The project is just super early. Though I made it a while back, I decided to revive it as a secondary project. So it needs loads of work.

Also, you can spam spacebar to fire many bullets per second. Way more than you get if you hold it… makes it a bit too eay

That is the idea. I don’t think it makes it too easy, depends on what the “goal” is, which of coarse right now there is none. It does kinda force you not to just hold it and you can speed up your fire rate if you want or need to in certain times. It’s part of the game play.

I don’t think it makes it too easy

Yes it does make it too easy!

So, I had to rename my project since there was conflict with another game of the same name. Seems like UFO has been used in every name combo possible. I’ve renamed the heading and the file on Dropbox but the Thread obviously is still named as UFOShooter. I can’t rename that myself, so if a moderator can do that, it would be cool. So, this is why my heading and download link now is a different name.

I’ve also uploaded a new version of the game, linked by the new download link, with the new naming in the game itself. Because I uploaded a new one anyway, I’ve made a small update (just for Tim) to the controls. So, now there’s a control scheme for A - D as left and right and extra fire buttons… W and M. So now there’s a few possible fire buttons and then of course now there are 2 sets for movement, whatever your preference might be.