Hi guys, thanks for visiting this thread. I’m here today to show you this little project of mine, a side scroller platformer game called Nebula.

Although I started planning this game about 10 years ago, this is the first time I can actually call it a game, thanks to blueprints. I’m a graphic designer based on Curitiba, Brazil, and I understand the concept of programming using traditional language, but I’ve never been too inclined to learn the languages, partly because I don’t always have all the time it takes. With blueprints, on the other hand, I was able to create the game logics more visually, and I can focus on the game design.

Well, that’s enought about me. Let’s talk about the game.

Nebula is a platformer sci-fi adventure with lots of exploration, scary enemies and an immersive story full of surprises. Everything on this game, from the weapons and items to the level design, has been meticulously planned to please fans of the genre. If you like the universes of Metroid, Alien, and Dead Space, you are probably going to have a good time playing Nebula.

Sure, the graphics are important. But Nebula is all about gameplay. The game is a sidescroller with gameplay elements from platformer, shooter and adventure games. Nebula has a non-linear progression and solitary exploration format. The player gains items through exploration and/or by defeating creatures. The upgrades enable further exploration of the scenario. Some upgrades are optional, and you have to think strategically to get to your goal.

The following is an extract from a crew member’s journal.

“The N.C.C. NEBULA is our ship, and, now, is also our home. Every one of us, every man, woman, and child were forced to leave our homes behind, our countries, our world. Everything we knew was at an end, and those who wished to survive came aboard, for they shared our same dream, a dream of future, a dream of hope, and a dream of courage. The transport took off, its massive weigh lifted by the mighty engines and thrusters, its course set for the Earth’s orbit, where the NEBULA waited. For the people on Earth the takeoff procedure might have sounded loud and terrifying for all the long while it took for the transports to steady themselves, amidst a chaotic mass of fire and smoke, and of people laughing and yelling, crying and praying, all at once. But, for us, it felt as if there was no sound, a deafening silence after all. There was only hope, and hope we needed, for building our future together, starting with our voyage through the starts, destiny unknown, and it had started. No one looked back, but me. And through the window I saw a shrinking gray world, that eventually turned blue as it shrank even more, until it finally disappeared into the black void. As the blue dot disappeared, I felt really small, and really big at the same time, and suddenly it seemed as if my life, and our effort, were both meaningless and meaningful. My cryosleep capsule is ready. I shall close my eyes and dream about the Earth for one last time. Next time I open them, a new home will be waiting for us.”

Please feel free to criticize, share ideas, tips, suggest other games or forums I could learn more stuff at. All I want right now is to discuss this project with you guys and make it better.

First of all, congrats on making your first game!

As to Nebula, it looks interesting. I’d try it.

Got any video gameplay?

Working on it. There are some gifs here: http://imgur.com/a/TXDGZ

Edit: I’m uploading a video right now. I’ll add it to the main post as soon as it’s uploaded.
BTW, I don’t know how to contact the moderators, so I’ll post it here: how do I change the thread’s name? For some reason, it’s all in lowercase and that looks weird.

Ninja Edit: I got some issues with the video, will be uploading it tomorrow.

The UE4 Community just blows one high quality project after another one out. Its like we all write history. Never seen so many good projects in a short period of time. Well, i guess alot of credits goes also to the amazing engine from epic who allows artist to create/develop so fast with all these powerfull tools that this engine has.

So amazing! Im looking forward to see some gameplay footage.

Thanks for the support guys! I’m still working on that video and I’ll post it here as soon as it’s ready. For now, here’s a new enemy I’ve been working on:

Working on it. There are some gifs here: http://imgur.com/a/TXDGZ

Edit: I’m uploading a video right now. I’ll add it to the main post as soon as it’s uploaded.
BTW, I don’t know how to contact the moderators, so I’ll post it here: how do I change the thread’s name? For some reason, it’s all in lowercase and that looks weird.

Ninja Edit: I got some issues with the video, will be uploading it tomorrow.

Thanks for that, Steve!

Hey guys! Here’s the video I promised. Sorry for taking so long. Hope you enjoy it! 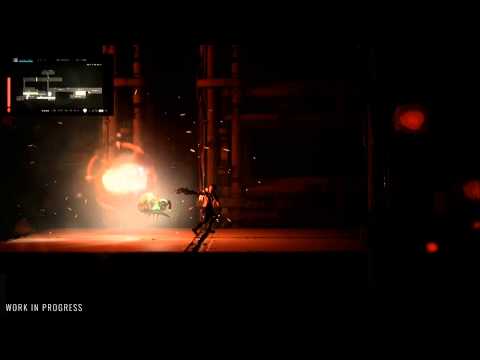 IMHO, the monsters and combat could do with a little work, and you should ditch the camera gore (it makes no sense in a side scroller).

IMHO, the monsters and combat could do with a little work, and you should ditch the camera gore (it makes no sense in a side scroller).

I agree, probably a bit of blurring with a good heartbeat sound will suffice I think or even better a visual que (character limping/bleeding). It’s one of the best side scrollers I’ve seen in a while, and with some fixes/additions/tweaks … will be awesome.

Couple of crits:
The animations when climbing (also one where she was turning/backing up looked a bit off) could use some work.
Tone down the smoke from the weapon (looks a bit weird?)
The cutscene where she walks through the door looks weird? She starts right next to it in the game part then switches to quite a way out then walks through, she should start right next to it and go through.

Just a few thoughts anyway. Keep it up!

This is one of my favorites. Any estimation on a release date? Beta? etc.? I’d love to play it!

@ambershee Thanks, Abuse is one of my favorite games! I’m working hard to improve the monsters behavior

I also agree that the blood on screen is a bit too much. I’m planning something more subtle for the damage effect, maybe make the character blink in a all-white material, like in old arcade games.

@Ghiest Thanks for the supportive words

The climbing is one of the first things I did when I started the game on UE4. For that reason, today I look at it and feel like it’s not very good. Both the animations and the bp logics behind it. I’ll probably remake that from scratch. Now about the smoke, are you talking about the welding part? Because if it is, I believe real world welding/metal cutting can generate a lot of smoke. And you’re also right about the cutscene! That is mostly a placeholder. There’s something special about this cutscene, actually. This is the entrance to the Save Room, and this cutscene will be repeated every time the player enters the room. Everytime you go to this room, you can save and heal. So the idea is to make a really good looking animation for that. I’ll work on it as soon as the bp logics are done

@Steve Thanks man! I’m aiming for a release in Q4 2015. A beta is coming out soon. I was planning to release the beta around Christmas, but now I believe it’ll take a little longer than that.

If you did that on your own my hat off, this looks AWESOME. Will wait and watch for more. Congrats!

Hey guys! I’m here with a dev update on Nebula. I posted the full text on the game’s indieDB page, go check it out!

Here are some new renderings: