[WIP] Mobile game - Not named yet

Ori was kind enough to point me in the right direction.
Progress feels like its crawling. Finished importing all existing assets into the game. Fixed minor UV lightmap issues. Collision issues etc.

Next step is to create some props to populate the house. Books, plants, toiletries etc.
Once that is done im just doing a final pass on the assets. Some Texture issues. Optimizing more. Found neat trick i only started using on the last few assets where i minimized texture usage from 3 to 1.

After that i am implementing physics for the character so it looks like he is levitating in zero gravity with limbs flailing about as you move him through the house.
I am aware of one bug where the controls are a bit dodge. It moves too slow when the camera is point at a specific angle. 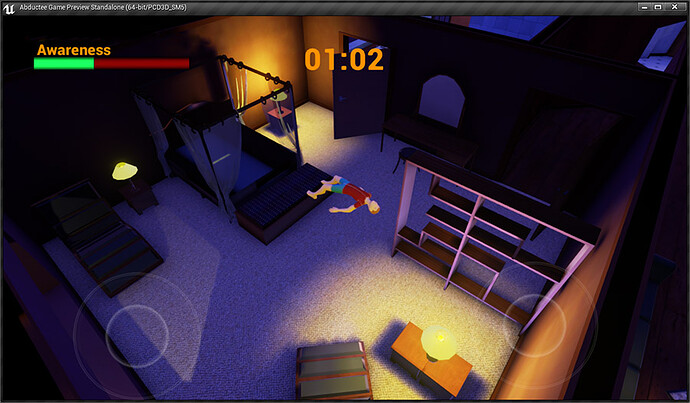 @Fen Thank you very much

Today was meh. Managed to polish all existing assets. Optimized the missed assets. Worked on lighting. Created 2 Window blueprints and meshes.
1 for small and one for big windows.
Simple bool to set if they are open or closed. Created new curtain for the rooms as they didnt have any and a simple texture for it as well.
Before i move on to the last few touches on gameplay and the character i am going to create a set of suburban houses to populate the surrounding area. Even though you will only briefly get to see it when the human has successfully been abducted and also at the start of the level when the alien ship flies in to the start of the level.

Its super hot here today. So taking a break till tomorrow.

Great work! Keep it up! Looking forward to where its going!

Really digging the lighting in the kitchen / bathroom!

Havent been much productive. Made 2 plants, some wall art and a book set for props to liven up the place. I think its good enough.
Moving on or should i say moving back to redoing the entire rig.

Discovered a scaled bone which causes havoc with Phat. Meh. Better get on with it. Reskin also.
After that going to experiment with the physics blended with animation.

Hopefully this will be the last time i skin and rig the character. **** system unit scales 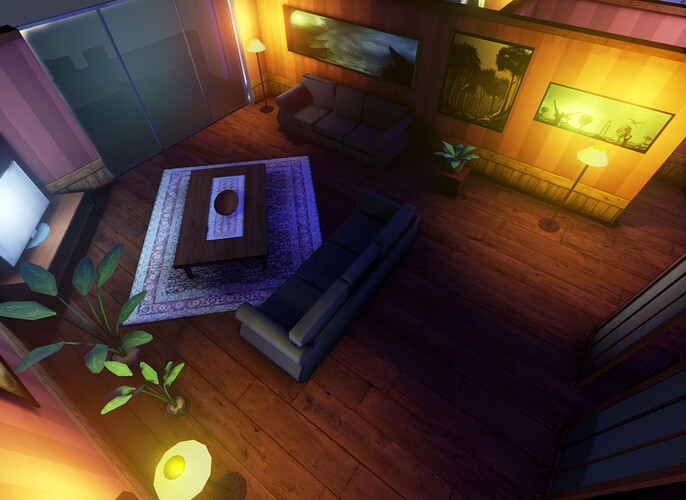 Experiencing some bugs. Well one mainly. From my level selection menu it refuses to load levels. I believe that somehow the mapname changes. On Pc i called the map Level1, Level2 etc. And implemented a blueprint for the menu.
The reason i went this way is i dont want a very long Blueprint. I just want to add my level button graphic, click on it and it knows which level to go to based on an exposed public variable i created to make implementing things faster.

As mentioned. In the ES2 previewer its working fine but something bugs when on the device.

Hi,
Game packager does not really know that you going to open additional maps in the game. So those maps that you are opening through BP commands are not included into final game package.
There is way to tell packager to include additional maps. Follow the answer in this question. https://answers.unrealengine.com/questions/80259/level-stream-and-open-level-android.html

So today was one of those days. I was implementing a pause button for mobile. Took me 8 hours. I used UMG. But thats not the issue. The issue was that just prior to implementing a button i deleted a big chunk out from a blueprint. An Old backup chunk of redundant information.

Apparently somewhere in that big chunk something was still active. The entire game started falling apart.
Collisions were being detected where there were none, menus would no longer open and close properly etc.

I also discovered by accident that UE4 now has a pinch function. So i used this to redo my pinch and zoom controls.

I packaged the game for Ios and Android.
To my disappointment, on Android the game looks 10 times better than on IOS.

Tomorrow im moving on to the rotation controls of the character. I have implemented physics and still experimenting for the best results as there seems to be a discrepancy between mobile and pc gravity, blend weight values. Epic Staff did tell me i need to check substepping as ragdoll physics are closely related to FPS.

All in all i am hoping to have a release in a week from now. That is. If i do not end up breaking everything again.

Screenshot from an Android device. Runs at 42FPS.

Hey I know you!

Well the GUI is mostly made using Actor blueprints. This allows for easier control of scaling according to screen size on different devices.
I did use UMG at some point but removed it due to the scaling challenges. Waiting for the 4.5 release.

The current stuff is placeholder art. Will be replaced in the next day or two.

Wow that seems like a lot of work. But yes, UMG is still very limited.
Have you tried CoherentUI? Maybe try it out, works very well with UE4.

I am though hoping they sort out UMG in the next release.

@dreampunchboy. No i have checked it out yet. The work load is not too bad. But of a schlep but it works. Will look into this coherrent ui thing.

I discovered i broke a lot previously when i deleted the redundant information out of blueprints. My end level triggers were no longer working.
Managed to fix it.

Due to time and wanting to get the game shipped asap i decided i wont use pets to patrol the house. Instead i implemented security cameras. This adds another level of puzzle to the game as your timing will have to be perfect. I am aiming to design the level so that in some cases its impossible to not get detected unless you rotate your character at the precise time on hard mode.

I also noticed that on mobile its hard to see if you are close to a wall or an object. I did a quick concept that you can see in the bright red. Once you get close to an object the area will light up red indicating close proximity. I might enchance the way this looks as currently its based on a rectangle. 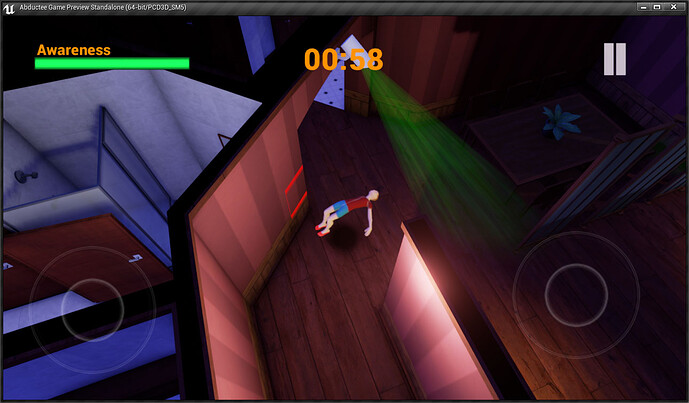 OK so i just realized even though i am reusing the same map but with different character placements for the 1st 6 levels, each map is 11mb.
This is not cool. This means the packaged game will be humungous. It will exceed 50mb.

So now i have to rework the entire main menu system. Redo the scoring system. Basically redesign most of the game logic. This is sad.

Sorry for you that you have to do so much. Maybe preparing a procedural system (i don’t know if you can instance or the other spawn / creation limits for mobile)

Yeah right now my challenge is getting a variable from the menu to the other game mode.
Seems that if the 2 game modes are different it cannot cast or execute a blueprint interface event on another game mode blueprint.

I think if i can figure out how to share that variable across levels, and game modes then the work wont be too bad

What a day.
Had to rework a lot of things to accommodate the single .umap
It introduced a lot of bugs. Systems falling apart and the game crashing down to a burning pile of sadness.

But highscores and save games and all the stuff that broke is fixed now and the game can use one map for 6 levels.
It took some work. And im not done with the tweaking of assets per “level” but i did test the concept and its working.

There might be an easier way to go about it but im not aware of it yet. So its manual work for now.
In the example what i do is i place the character where it should be based on what level you are playing.

I need to repeat this process for window open states, curtain states (might merge curtain and window into one blueprint). Also need to do this for camera locations at start of every level, and the trigger volume setting the end level sequences. 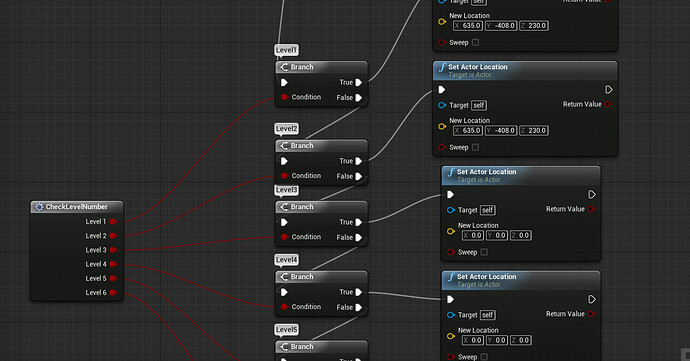 Today im doing some more optimization for the Iphone.
It was running at an average of 24fps. I now have it on an average of 40 FPS for the iphone 5c.

There is still some room for improvement. But for now i am happy. Need to start work on Gamecentre and google play services and figuring out how to save to your online profile etc.

Also need to track down someone with a lower spec iphone and android to test the performance.

I think its time to complete the game now.
This is where i am. Do you humans feel i should add some surrounding stuff… like grass, neighborhood etc? Or leave it black?

The video will show basic mechanics of the game. Swipe rotates player.

Haha I was NOT expecting an alien ship, somehow from all the screenshots I thought you would sneak into
a house and kill someone…

Anyhow the level looks awesome! I take it you don’t have sound at the moment?

Nope. No sounds yet.

The ship will be better animated… or atleast actually fly infront of the camera on level start.

The guys at makegamessa gave me some new ideas. Turned off most lights in the house. Enabled Night Vision. Light raises awareness.
Need to add more obstacles to make it harder to steal the person.

And i also want to get an EMP device in to temporary disable security cameras.