I’m trying to write a function that will VInterpTo() every tick to move the player an arbitrary distance in a given direction, in this case in the direction he’s facing:

This compiles fine, but the movement it creates is seemingly random: movement direction is independent of the character’s facing, and seems to either push him away in a random direction, or suck him towards the world origin. The most obvious explanation in my mind is that the vector math is wrong, and endLocation doesn’t point to a position n units in front of the character like I think it does, but I’m really lost when it comes to how to fix it.

I am guessing that you need to add startLocation to your current endLocation, as your endLocation will always be around 0 since GetActorForwardVector is a unit vector pointing forward, not a position in space in front of your character. He’s probably always moving to a location kind of by (0,0,0). 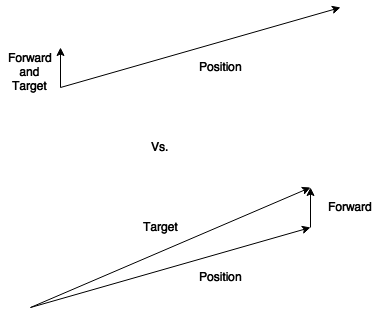 Hmm, I kind of see what you mean, I was definitely stuck thinking of the vector as a coordinate triple, not a unit vector. You mean add the two together when I first calculate endLocation like this, not inside the final interpolation, right?

That’s the only thing I changed from the original post, but he still seems to get sucked towards the origin. I made a handy-dandy video showing this in action- the notify is on his jump animation, so every time it jumps the vinterpto logic runs: Imgur: The magic of the Internet

Since he’s still getting sucked into the same rough area, I’m convinced trying to grab the forward vector is the culprit. I tried a slightly different approach, and added rotation in while I was at it:

The rotation part works fine, but it still ends up getting sucked into the same corner whenever it fires.

I was definitely stuck thinking of the vector as a coordinate triple, not a unit vector.

It is kind of both. The problem you’re having is that the forward vector is just a directional vector. It isn’t a point in space in front of the player. It’s the direction the player is facing from the origin. It’s a coordinate triple relative to the player’s location, not relative to the world.

You mean add the two together when I first calculate endLocation like this, not inside the final interpolation, right?

The sound you don’t hear is a boatload of celebratory cymbals and fireworks going off, because this finally works- thank you so much for your patient explanation and the illustration! Vector math scares the heck out of me every time I try to make it work