I’m throwing breakable items onto a flattened part of my landscape. At first I thought maybe it’s falling slightly under the landscape and spawning the emitter there but at
z2838 - no splash
z2837 - splash

This was in one session but now the issue does seem to be consistent, every time I launch from the Level tab, it works every time. If I use the play button in a blueprint tab, the emitter fails to spawn every time…

It seems like opening or closing editor tabs may be responsible for that more consistent behaviour turning on or off… I just had another session (launched from Level tab) with one spawning a splash and one not, then it went back to consistently working as long as I launch from the Level tab again.

After restarting the editor, now splashes sometimes spawn when the game is launched from non-Level tabs and I haven’t seen them fail in several tests from the Level tab.

What is going on!?

Here’s part of the emitter setup in case it helps: 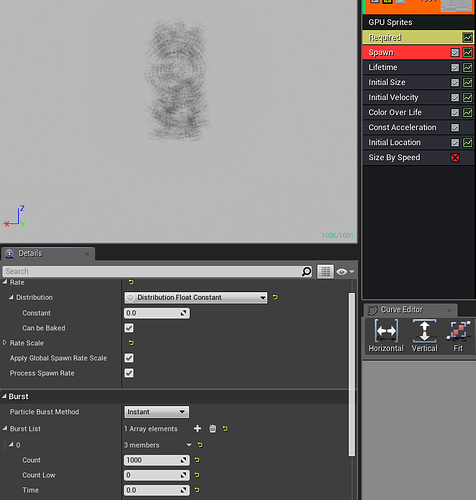 EDIT: I forgot to mention the nodes before and after the emitter always work.

I think I might know what the issue is. Particle emitters have Bounds (I can’t tell you now where to find it, somewhere in the emitter component settings). If you leave the Bounds default, the particles would sometimes disappear because of the garbage collector that sometimes considers them garbage, especially if the camera looks away. I had a similar issue with a laser - it would randomly disappear, but setting the Bounds to extreme values like 100000 fixed it. I don’t have access to the editor right now, so can’t provide any screenshots. Try looking for something like that in the emitter settling.

Yeah that seems right. I made it a regular sprite instead of GPU sprite since I’m only using the exact particle limit of regular sprites and they don’t use bounds. So far it works every time. I’ll have to keep that in mind if I ever need GPU sprites I guess.
Still weird that it depends where I launch the game from (IIRC, I even tried launching a standalone window from the Level tab and it worked the same as the default, unlike standalone windows launched from other tabs).