Why is my camera blurry in game

I have a project that is setup to use the Oculus Rift. When inside the Oculus everything looks as intended. But when I Play in Editor and not in VR the camera is really blurry. I thought it had to do with the World To Meters measurement but I set that up on an analog to scale it on call and the camera is always blurry. It looks like my screen resolution is half size and underwater.

It almost looks like it’s trying to replicate the oculus resolution in the editor. If I eject the camera the resolution returns to normal, until I possess the character again

Could this be due to optimizing for VR? Like resolution scale? Also what about turning on instanced stereo? That requires the game to recompiles right? What if I wanted to have two modes in my game, one where they play outside of VR and one where they play in VR? 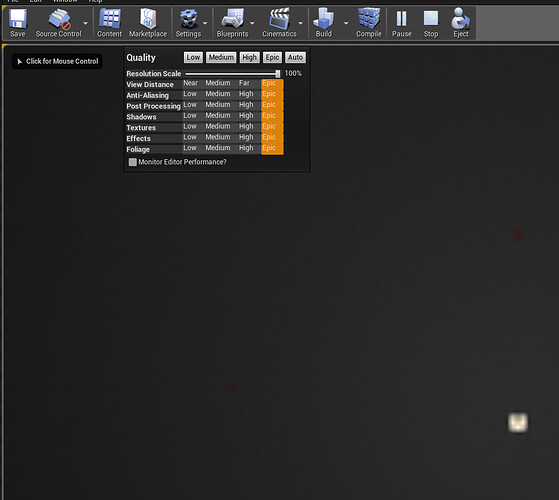 The image shows that I have the scalability set to Epic, and yet the whitish dot bottom right is clearly pixelated. When I put the Oculus rift on all of this looks as expected, but playing in editor seems to hold some strange resolution scale

Yeah I’m still running into this. When I type r.screenpercentage 100 to 300 I see no difference in the viewport while in PIE

To solve this I override the camera post process Screen resolution.