Why does this tutorial reference something that doesn't exist?

I’m following this tutorial: https://docs.unrealengine.com/en-us/Engine/AI/BehaviorTrees/QuickStart and reached step 10 where I start setting up my variables.

This is what they show. 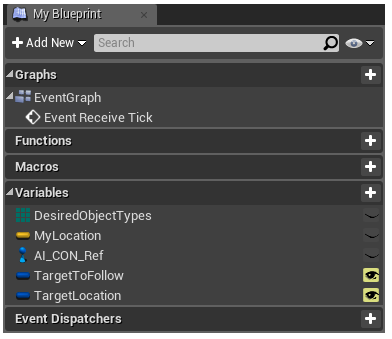 This is how their blueprint looks:

But when I try to create the “Array” of type “EObjectTypeQuery”… nothing comes up in the search matching that under array. The only “EObjectTypeQuery” I have available, is an Enum. and this is what happens when I use it…

That is very clearly not the same thing and it isn’t working. Now, I do have ADD and have issues with attention to detail. I know this, so I have triple and quadruple-checked the tutorial. First, I realized that my TargetToFollow variables weren’t Instance Editable (public), and then I noticed that the Radius on my MultiSphereTraceForObjects was set to 0… I fixed that.

Debug during play testing is showing me that my location is indeed being recorded, but the AI never moves. It is my assumption that the TargetToFollow is never being assigned.

The easy way to create a variable that fits into a node is to right click the input pin and select “Promote to Variable”.

You can also left mouse click the icon next to your existing variable details and select “array” as it is currently a “Single variable”.

This might not be the root of the problem though as what you already have works fine if you just need to trace against one object type.

Turns out that the actual problem was I did not know that I could change the Enum of EObjectTypeQuery into an array by clicking the icon to the right of that variable type. 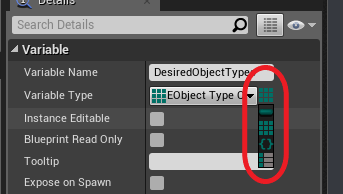 Even after being told that by someone in one of the Discords I frequent, I still found out that I had a lot of missing values that were only shown in the pictures of the graphs… I ended up missing them because earlier steps showed values to be entered, while later steps showed the entire graph. It would have been helpful if the values had been highlighted somehow.

Now, I have a new problem that is not a part of this question: my AI is randomly not returning to his home position after the delay triggered by my breaking LOS… I will have to either figure it out on my own or submit a new question… it is one thing after another. Lol.