When are you going to support Linux?

When are you going to support Linux?

Really? I can’t even download the launcher, all I get is am .msi.

How do I get the linux launcher?

You won’t get a launcher for Linux, but you can build the engine from the source and for that all you will need is to get the source from GitHub, follow the build instructions there and you will have the editor working with the ability to generate the packaged game. To have the launcher feature you can dual boot with windows and via launcher you can download the stuff you purchase from the marketplace.

By the way, I think it works this way for quite long time, I remember building a Linux release in the past for UE4.12 or 4.16.

So I can’t use the marketplace if I don’t have Windows? Which I don’t. So, not exactly Linux “support” then is it?

So the question remains, when is Unreal Engine going to support linux?

So I can’t use the marketplace if I don’t have Windows? Which I don’t. So, not exactly Linux “support” then is it?

I see both as separate entities and definitely you don’t need the Marketplace to succeed in game making, but surely it will help. You might want to ask for launcher and marketplace support at the Engine/Marketplace section of this UE4 Forum. There is a separate team of development for the marketplace which includes the launcher development.

I decided to try UE to see if it was easier than Unity. It’s not going well so far…

So the question remains - is Epic ever going to actually SUPPORT Linux users? Running windows executables in emulators is not Epic supporting Linux users, that’s the Linux community supporting Epic.

You cannot use a username and password after 16th August 2021 to validate your GitHub account. You MUST use “git config --global credential. helper” and apply for your personal token for any clone after that date Bash for Linux.

Have you registered for an Epic Games account and linked it with your GitHub username. Also, you’ve installed Git and you’re ready for the next step, where you’ll fork and clone the UE5 source code from the Unreal Engine GitHub repository.

You say you are from Unity meaning you will not have applied for Epic Developer Validation. All UE source is in a “PRIVATE” repository the reply is always 404 “Private page not Found”. It’s no publicly viewable. This could be likened to a firewall on UE source

As I said before, you don’t need the launcher to use Unreal Engine 4, I actually don’t use it because I usually work with custom builds (every custom build is a compilation of the engine done by yourself) and not the public release found at the launcher.

The source code for the launcher won’t be provided for users to compile at Linux probably… mostly because there are sensitive code there that handles the business portion of the marketplace and the game store, which handles purchases (credit card, paypal) etc

I’ve been using Git for a while, never had to do anything like this. It works for everything else.

I followed the linked instructions. They just don’t work.

Hi @peteeepops ,
Open your Linux, browse your Git Hub account in your browser. Got to your profile picture and use the drop-down. Select “your Profile”. On the left do you should see the Epic Games Icon. 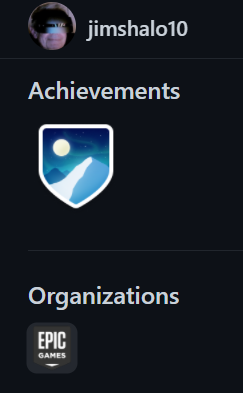 If you cannot see this you are not linked to Epic Games and you will get a 404 error.
Not Linux/Epic this is just plane web browsing and if you cannot see my profile links 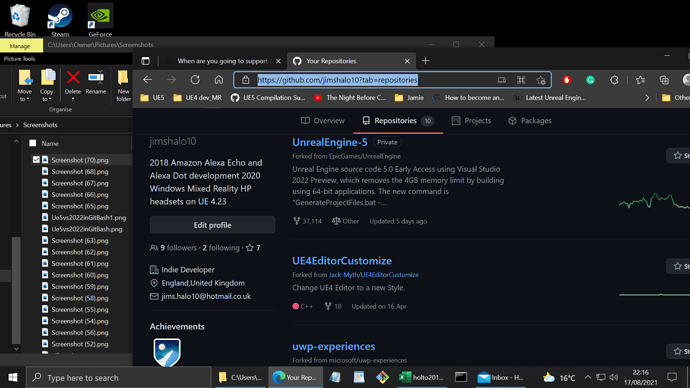 image1920×1080 359 KB
because they are private then its your setup not an Epic/Linux problems see Your Repositories (github.com)

You could also just try download a zip file from the browser and using gzip to unpack it.

Epic Marketplace will not have any Linux binary last time I looked there were over 20 different flavours of *nix. That why you have to build from source

I assume you have the Linux Nvidia RTX3040 drivers installed as Nanite and Lumin rely on the NVIDIA device drivers to be installed.

There is not much point in loading UE5 if you don’t have to latest Nvidia version 431.* drivers for Linux loaded
Thanks,
Jim

The results of the my profile link are as follows - 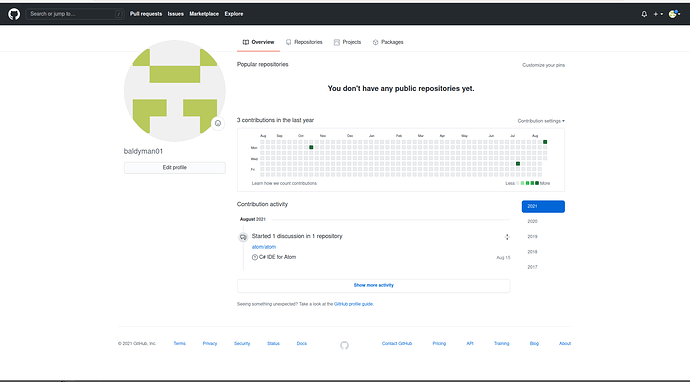 It looks not in the slightest like your attached picture. I can’t even see where that Icon should be but isn’t. 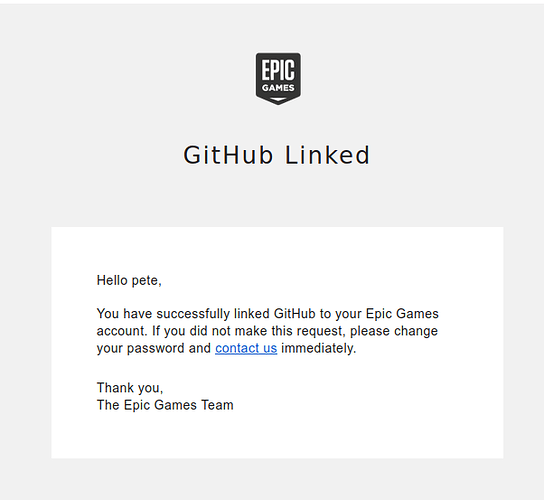 Apparently I’m supposed to receive an email from Github but that hasn’t happened.

Sorry for being a beginner but I’ve read all the docs, linked my github account to unreal account having back the confirmation emails, I’ve created in git my token, but when trying to
git clone --branch ue5-early-access https://github.com/EpicGames/UnrealEngine.git
the answer is
fatal: repository ‘https://github.com/EpicGames/UnrealEngine.git/’ not found
also cannot find out in git the organizations like in Jimbohalo10 images posted, even having done the connection steps regulary.
can you please explain in simple steps how a normal able linux user should install UE?

Don’t worry, it’s not us. The instructions are correct - the system is currently broken. More here-

I been using Unreal Engine in Linux for years, Runs super and very stable for me.
Once you get the install figured out once it’s easy to update, or to move to a new machine and updated OS is super simple, Just moved my Unreal engine folder to the new ssd and ran the setup.sh then generateprojectfiles.sh in the root folder it was ready to go on my new system.

I might have time to do a video of the process this weekend, I’ll post it to my Minds account if i do there are a few users there asking for a tutorial as well. My time is tight these days so don’t “expect” me to get it done but i will try.

Hi @peteeepops,
The problem now is has been fixed.
This issue was resolved around 12:00am EDT on Friday August 20

Except they don’t give you access to the marketplace, so even stuff you might have paid for can’t be downloaded.

Going to try one of the kludges to get access but judging by the comments is questionable weather they work and Epic keep breaking them.

So my original question still stands. It’s nice and all that Epic allow us to scrabble around and kinda kludge it together enough to work, but when are they actually going to SUPPORT us?

Installing the Launcher/Markerplace works via Lutris