What's the practice for spawning replicated Actors with parameter variables?

When you spawn a replicated actor on a server, it is my understanding that the creation of the actor on the client side will only have default values for that actor. It will not have the replicated variables the server has until after the actor is created.

I’ve been searching for the recommended way to handle a setup where you want to provide a spawning actor variables on creation. I’ve come up empty handed from official documentation and from years of people asking similar questions on these forums except someone suggesting the Event BeginPlay is a good place.

What I’ve concluded investigating the code and playing with it:

Server spawns a cube, but it has to tell the cube at spawn to be a specific color - ie blue or red.
The receiving player gets the cube spawned, but does not know its color during the Construction Script.
Any logic the cube needs that wants to know about the color var needs to happen after Event BeginPlay if the logic is for only triggered once on spawn (eg play a spawn FX), and/or logic in ‘RepNotify’ if the cube needs to react to color ever possibly changing (eg change the color of the appearence)

Is this understanding correct? Are there better ways I have overlooked or misunderstood? I need to be able to provide a concrete method for non-programmers to be able to spawn replicated actors, with parameters, that won’t bite us later. Event BeginPlay seems to be the hotness.

Hey there,
I recently encountered a similar issue when attempting to create a reconnect feature in my game. While I solved my issue in a different way, perhaps this can help you as a workaround:
Every AActor has two functions ‘OnSerializeNewActor’ (Server) and ‘OnActorChannelOpen’ (Client) that you can override and send custom data with. As a reference, you can take a look at the implementation in APlayerController. Unreal does not provide any syntactic sugar with this, so if you wanted to leverage this feature, you would have to implement it manually, I’m afraid. Still, I think this is one possibility to send such ‘spawn parameters’. I am unable to test it out myself right now but judging from the code this serialization step is executed after BeginPlay on clients.

Best approach from my experience is to have each variable set to replicate and trigger initial usage via Begin Play. You can also use Rep_Notify. It’s all case dependent. 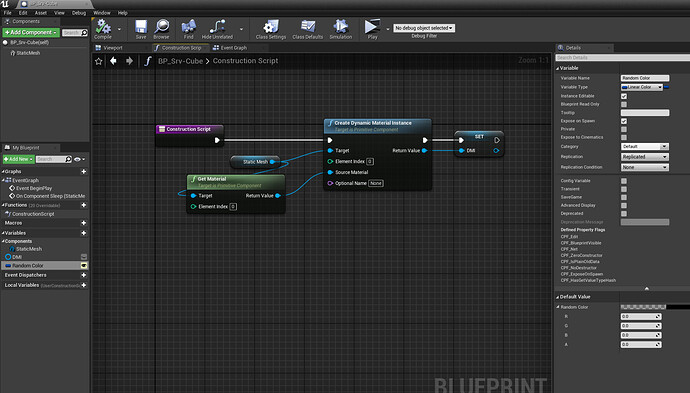 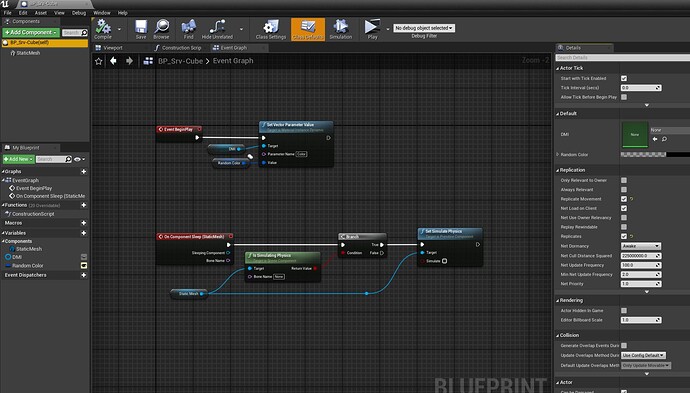 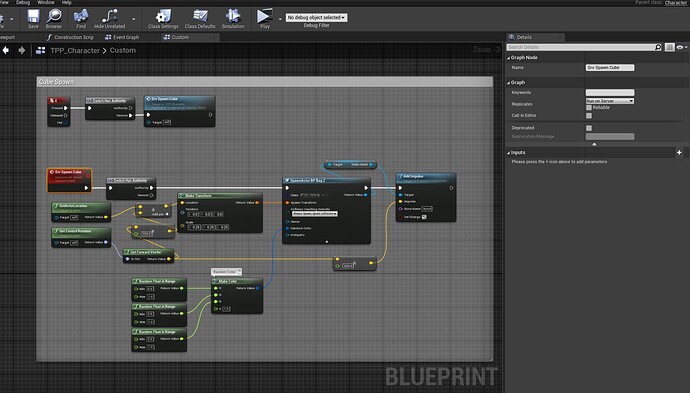 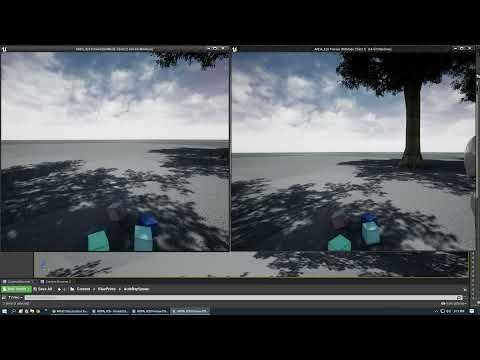 Just to make this clear as I had to learn this out myself, the initial replication happens after AActor::BeginPlay has been executed. Any logic in BeginPlay but before AActor::BeginPlay (usually Super::BeginPlay) is the only place where the client can do stuff to the Actor before replication. (Useful for subscribing to events that rely on replicated values).

I do not believe OnConstruction/ConstructionScript is ever called on clients on a replicated actor. It is only called when the actor is ‘created’, and it’s the server (or the Editor) who is responsible for creating it.

Thanks. I’m wondering if maybe I used too trivial of an example with the cube. It’s not so much about things not being mutable, it’s about triggering logic on spawn.

Sidenote: Yes OnConstruction is called for replicated actors (at least the debugger triggered on my blueprints for a client on it). Though, like I said, variables are not replicated at that stage. So you attempted to get/use a variable in OnConstruction that’s replicated, expect problems and potentially crashes which is how I landed here.

RepNotify is triggered in two ways.
The first is whenever a value is changed (in this case, it’s whenever the client receives the packet).
The second is when the actor is first replicated (I believe it is first frame, since stuff is replicated before BeginPlay is finished). You can disable the second behaviour through conditions if you wish.

If you truly want initial only logic, then you should use the initial only condition.
If you want logic that differs based on the number of times it has changed (such as the first call), then I don’t see any other way than writing some code that records the occurrences.

As for different values depending on each other. This is extremely difficult to solve I think. I have definitely had some trouble with this in the past. It’s definitely not an simple solution though.
Two possible solutions I can think of is to simply check if the condition has been met, through both RepNotifys or through the Tick. (I know it doesn’t sound optimal but it works in many cases).

In my experience, multiplayer games need to be designed differently and very carefully as you can never guarantee the order of execution.

Oh cool! I did not know RepNotify will trigger with the spawn, that’s very good info.

As long as they’re available together before BeginPlay, I think it’s safe to presume that BeginPlay can be treated as a “OnSpawn” event with replication. And then RepNotify can be used for any logic that doesn’t need to have context like spawning or other stuff. Like if the color value of the cube changes, just do the logic to change colors.

I have a lot of cases where when something spawns off the server, the client will need to know multiple pieces of info before triggering logic.

I thought about the Ustruct bundle, but that’s programming work for designers I want to avoid (although easy if needed, just boilerplate). That could be useful for super specific scenarios so that’s good to note it can be used - ie if only these linked values change trigger a RepNotify for the bundle. Probably will come up eventually.

You can give it a go but I do think the BeginPlay solution isn’t perfect though. There is a good chance that if there’s high latency or a dropped packet, some values may not be ready in time (I do not believe I have ever encountered this though).
I cannot confirm this. It is entirely possible that Unreal does something where the spawning of a replicated object is only triggered when the client has all the initial replicated values ready.

I’m not sure if you need any more advice but I just spent the last few hours going through this so I 100% know what I’m doing is right.

It seems I was incorrect when I said OnConstruction isn’t called on Clients. However, it should still be avoided because it will only ever be called for Actors that weren’t originally part of the level (i.e. created from SpawnActor()). There is a version for Actors that were originally part of the level called OnPostLoad, however, at this point in the lifecycle, the Actor isn’t aware of its NetRole (whether it’s a server or a client).
Ultimately, both should be avoided for anything other than what it was designed for (which is adding components and setting initial values).

Replication and thus RepNotifies do indeed always seem to be triggered before BeginPlay. Alternatively, you can also use PostNetInit but that only works for clients and doesn’t work for Actors that were originally part of the level.

If you want to do stuff before any replication (i.e. subscribe to certain events before any RepNotifies which will later trigger them), then your best (and basically only choice) is to use PostInitializeComponents. However, when using this method, you will have to add an if (IsValid(GetWorld()) && GetWorld()->IsGameWorld()) check since it is also called when opening a Blueprint in the Editor (under certain circumstances, this can cause crashes).

The same idea applies to Components too, with OnRegister being the Component version of PostInitializeComponents.

I would have called OnReady OnCreated instead but UE4’s definition of ‘created’ doesn’t include objects that were instantiated from a serialized file (i.e. a level).