Whats a good method to render shoji doors? You know like paper and a light shining through it

Whats a good method to render shoji doors? You know like paper and a light shining through it… not transparent, but u can see the light and shadows through on the paper from the other side. I have attached an example screenshot for what im looking to do…

So far I have tried using the double sided foliage thing with flat plane geometry and that gives terrible results when lights are baked. Like one side is really dark and the other side is lit.

i have it currently set to opaque, but translucent materials get screwed up because i have fog on the other side and it starts seeing other transparent stuff through the shoji as though it doesnt know which to render first.

Also why would i use transluscent if i have no opacity value… u cant see through things like that… u only see shadows from the other end… much like foliage i would assume. Seems to work correctly with realtime light, but not with baked lighting when i have it set as opaque with no translucency… lighting model 2 sided foliage… But again i need the lightmaps to be correct… not just realtime light.

Try this, it’s simple but you can play with it if you want. 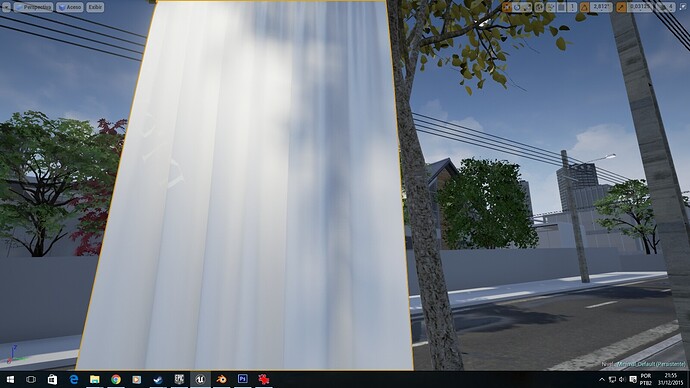 Will that work with baked lighting? Is the geometry a plane rendered double sided? or more of a box with geometry on both sides already?

I don’t know how well it works with baked lighting (unfortunately I can never use baked lightning since I require dynamic day night cycles in most of the projects I have worked on) but I have seen a similar material as shown above (double sided, Opaque, with Subsurface shading model) and it is working pretty well for sails.
http://www.mediafire.com/convkey/b943/35a1xxdccrnn00mzg.jpg?size_id=5

Like TK-Master said in his case, majority of my examples are based in Dynamically Lit worlds. Though, I have worked with the subsurface shadowing in a static/dynamic environment before. The world is lit Static/Stationary while the light that will be casting the shadow onto the Privacy Screen in the scene was set to Movable.

Here’s is a shot from the scene:

Here’s a shot from the material (You don’t need the emissive node. I only use it to boost the brightness of the shadows):

I realize im pretty much doing what u guys are doing, but at this point even if there are no shadows… my current results are 1 side lit… the other side is practically black though i still see light shining through where lights are… just looks much different with dynamic light… (on a screen thats colored white) Which makes no sense from a lighting point of view… though it works with dynamic movable lights fine.

Only thing im going to do is play with the opacity settings and see if that changes anything.

Yea opacity settings did nothing to improve it. So am i correct to assume you cant really bake translucent stuff all that well in unreal engine 4?