What is the best way to create a simple OS for PC Tech game?

I apologize if this is something that should go somewhere. This is my first post. What I am curious about is: What is the best way to create a faux operating system within Unreal. I am wanting to make a PC Tech Simulator game in which the player runs around a building but can then sit down at a computer and, when he does, it brings up the computer screen and allows for different interactions. I want the OS screen to be controlled with the mouse. Not by the character if that makes sense.

I came across semi-related questions that pointed toward possibly using UMG or Widget Interactions but those were for smaller interactions with terminals or panels. So, I didn’t know if that really was the preferred route to take with something a little more complex. I also read that widget interactions were changed in 4.13.

Can the UMG and/or widgets really do something like a very minor operating system that would include clicking on some shortcuts and receiving fake “help tickets” that appear based on a random timer?

Thank you very much for any insight you can provide!

I did this, very similar to blueprints. 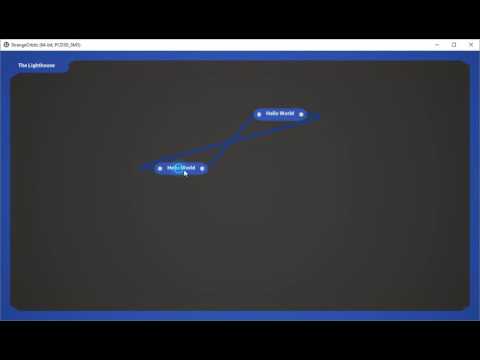 But I’m not going to use it, because I need a VR solution and this really is for 2d.

By OS I just mean an operating system of some sort. An example of game play would be:

The game is a top-down view controlling the PC Tech character. He can run around a building talking to people and doing things but at some point he will need to go back to his computer and check things. When the players clicks on his specific computer it will transition to a new ‘scene’ or area that is the operating system I mentioned. So, now the mouse controls the cursor and the player must click a logon button to get into the computer. Once that happens, it loads a ‘desktop’ with clickable shortcuts. Additionally, I want to implement a timer system that will randomly pop-up emails or instant messages (or even help tickets) that gives the player a task to complete. What I’m lost on is how to get started with the Operating System. I am using a full screen widget blueprint at the moment which pops up a new screen when clicking on the Tech’s computer but it doesn’t seem like it will be granular enough to handle the other things I mentioned.

I’m not sure if this helps, but I have found using widgets is the only way of getting good clear fonts. I’ve tried texture font’s but they are not really clear at low sizes.

In my example above, I used traditional 3d stuff (actors) for dragging things around (raytracing hit) and did the text as widgets. In that way, I had the rich interaction of 3d with the clarity of the 2d widgets.
The position of the widgets was driven by the location of the actors.

You could set it up as a 3d scene with the camera fixed, looking on a big “screen”.
Right in front of the screen, some text render components are displaying all you need.
A flat mesh with everything masked out, except the edges could be a “window border”, etc…

PS: Or use the new draw to render target features

Thanks guys. I will certainly have to look into those suggestions. Thank you very much for the ideas and if you have others I am certainly up for trying it. I’ll keep you posted on the results.